A buffalo farmer in Bhaisepati 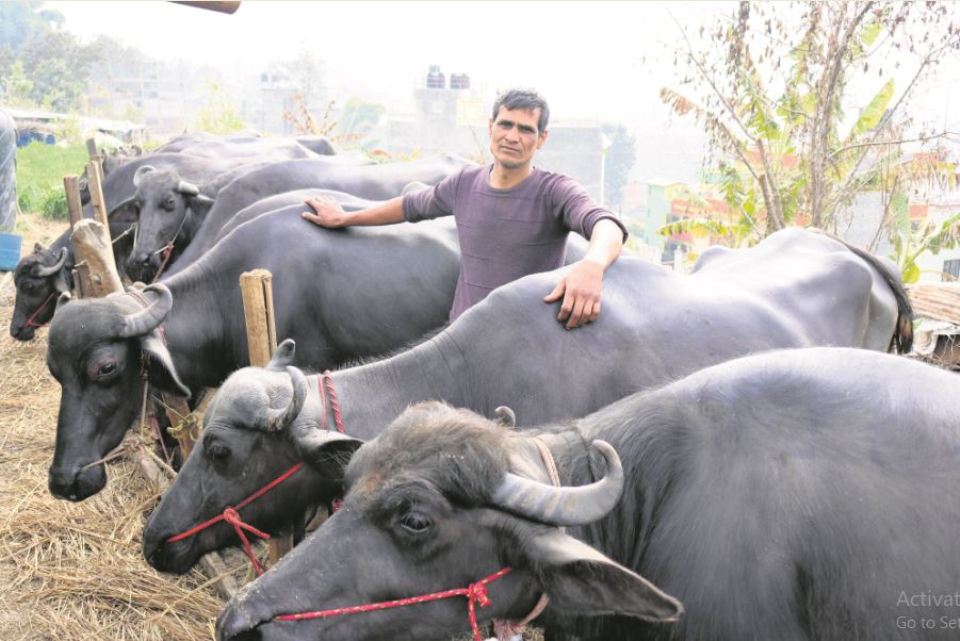 LALITPUR, Jan 18: Sahadev Niraula, 48, has no idea why the place where he lives at is called Bhaisepati (Bhaisi is the Nepali word for a buffalo). But he indeed has a huge business associated with buffaloes at Bhaisepati of Lalitpur and earns as much as Rs 150,000 a month from it. It has been five long years since buffalo farming has kept him quite busy and happy.

"Currently, I have 13 buffaloes, five of their calves. I sell 200 liters of milk every day," he says, adding, "I have some cows as well. But I depend mainly on my buffaloes for milk."

Niraula's past is rather sad. Life was harsh at him. Born in a poor family in Bajhang district of Nepal, he sneaked into India in search for a job while he was still a child. He worked as a child laborer in Mumbai, Delhi and Himachal Pradesh. "I have seen extremely hard days. I worked hard for a meager pay. I was very small when I went to work in India," he reminisces. "I spent 16 years in India working at one or the other place."

He later tried his luck both in Nepal and India with different jobs. In Kathmandu, he once worked as a press operator. But nothing paid well, forcing him to do something more rewarding.

"I sell milk worth over Rs 9,000 per day. In a month, I make around Rs 300, 000 and half of this is my net profit," said the father of four. "I became a buffalo farmer due to necessity, it was not possible to provide good education to my kids with my small earning," he added, claiming that he used to make Rs 42,000 a month from a job in Kathmandu earlier.

He has to pay Rs 20,000 a month for the three ropanis of land he has leased in Bhaisepati. And he covers this 'expenditure' just by selling the dung. The lack of enough water worries him. "There is not enough water, just to feed my cattle I have to buy water worth Rs 12, 000," he reported.

Niraula works from dawn to dusk to keep his business running. A little slackness in work may incur huge losses. Niraula's wife Janaka Devi is equally sensitive about the health and well-being of the cattle.

"It takes two hours just to milk the buffaloes. Then I go to my clients visiting them at their doorsteps, carrying milk on my bike," he reported. "I am planning to expand this business. More labor, more returns," he added.

Niraula has insured his buffaloes. While each buffalo costs Rs 150,000, the government's insurance scheme provides a coverage of not more than Rs 100,000. "However, it's important to insure the animals," he stated.

There’s a good thing about operating a business through Instagram. Anytime I find myself free, I can easily upload pictures... Read More...