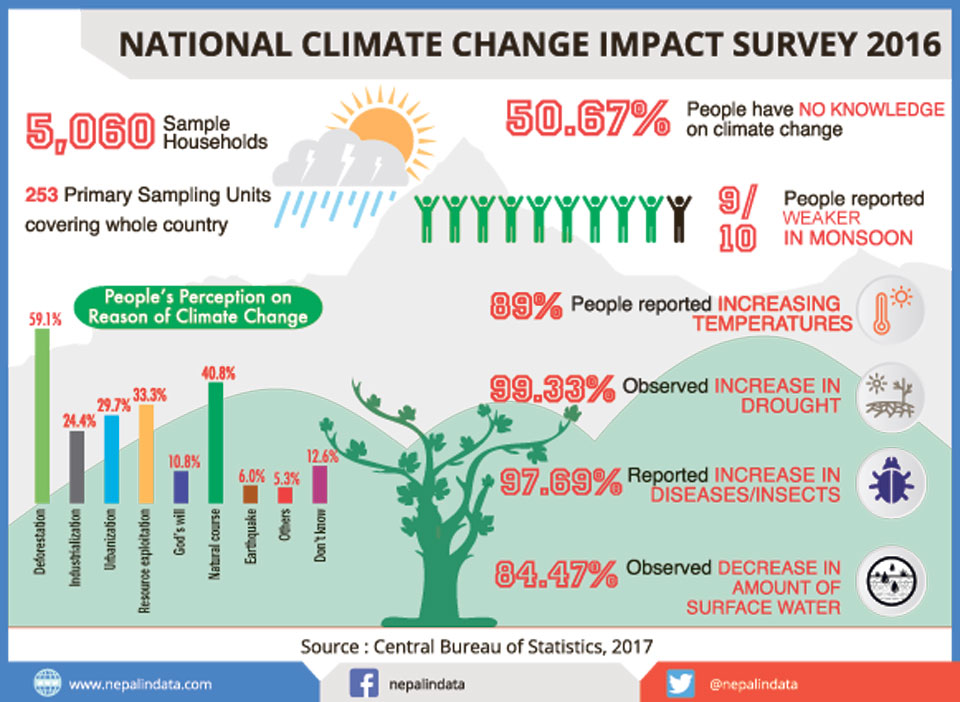 KATHMANDU, June 22: It is no longer a hypothesis or myth. The impact of climate change is real as far as Nepal is concerned.

A major climate change impact survey commissioned by the government has revealed compelling evidence that Nepal is already at the receiving end of climate change in a number of ways.

The first of its kind National Climate Change Impact Survey (NCCIS) conducted by the Central Bureau of Statistics (CBS) has shown that the impact of climate change has been experienced in various sectors, mainly in agriculture, forests and biodiversity, water resources and the energy sector.

The  survey also revealed that 84.47 percent of households observed significant decrease in the amount of surface water, with a majority of households in the mountain and hilly regions experiencing complete drying up of surface water as well as underground water. This is attributed to scanty rainfall caused by climate change.

Among other things, a majority of households (50.63 percent) reported early flowering/fruiting of plants and increase in invasive species of shrubs (92.03 percent), while they experienced a significant decrease in the number of trees, shrubs, medicinal herbs, non-timber products, aquatic plants, wild animals and birds.

Although several policies have been devised at the central level, government officials say implementation of such plans and policies at local level has been challenging due to lack of integrated and reliable information on various facets of climate change impact.

“As this is the first of its kind survey on climate change impact conducted at national level in Nepal, the findings of the survey are expected to bridge the gap that exists in the regular planning process in Nepal,” CBS Director Sushil Sharma told Republica.

The survey provides data and knowledge on the impact and effects of climate change, considering its multiple dimensions.

According to Director Sharma, 75 districts of the country were grouped in three ecological belts running from north to  south, namely mountains, hills and the terai. Each ecological zone was further divided into five development regions in order to form 15 eco-development strata for survey purposes. Kathmandu Valley was treated as a separate stratum.

Households, which had respondents aged 45 or above and had been living in the same locality for at least 25 years, were purposively chosen in order to obtain reliable information on the impact of climate change.  Only 49.33 percent of the total 5,060 households under survey said they had heard about climate change, showing that a majority of people across the country lack knowledge of climate change.

The survey revealed that the affected households have been adopting various climate change adaptation measures. Among the 25 farm and 7 off-farm based adaptation measures identified, most households reported using chemical fertilizers, putting additional investments into protecting livestock from disease, cultivating mixed crops and improved crop varieties to deal with the impact of climate change.

Likewise, those adopting off-farm measures to deal with the impact of climate change said they changed their food consumption habits (76.64 percent households), involved themselves in road infrastructure improvement (79.86 percent households) and community based natural resource management (56.72 percent households). “Majority of rural households have been using more adaptation practices in comparison to urban households,” the report said.

JHAPA, April 29: More than 4,550 households in Mechinagar Municipality-1, 2 and 3 in Jhapa district are forced to drink contaminated... Read More...

KATHMANDU, Feb 9: Some 58 percent children aged between 8 and 12 years are exposed to cyber risks in Nepal,... Read More...

NOC is still at a Rs 50 billion loss.  Who is then making the profit from higher prices of petroleum products?
19 minutes ago