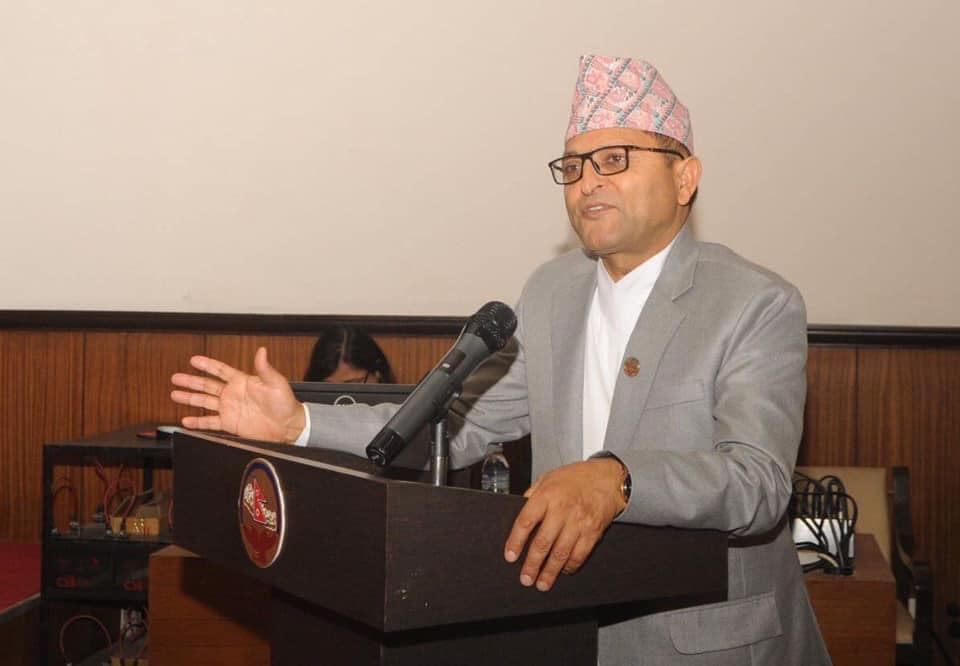 KATHMANDU, April 13: Amid lockdown period, Chairperson of National Assembly Ganesh Timilsina on Monday held a discussion with lawmakers through a video conference.

Chairman Timilsina held the interaction with the MPs about the roles they could play in the wake of  rising coronavirus cases.

On the occasion, he urged the lawmakers to get informed about the problems of people and make sincere efforts to resolve them at the earliest. “I’d like to request you to provide services to the people maintaining social distancing,” he said during the virtual meeting.

Participating in the discussion, a lawmaker of the ruling Nepal Communist Party (NCP) Dina Nath Sharma said that the government should intensify efforts to address the problems faced by ordinary people throughout the lockdown period.

Radheshyam Adhikari, an MP representing the main opposition Nepali Congress (NC) stated that general people are in dilemma in following the orders enforced by three tiers of government. Not only people, even the governments are not clear about it, thus, creating hurdles in the fight against this global pandemic, according to MP Adhikari. He also took time to say that the Nepalis stranded along Nepal-India borders should be brought to Nepal on humanitarian ground.

Also speaking during the online meeting, Tara Devi Bhatta, who is also the chair of Parliamentary Committee on Sustainable Development and Good Governance, said that amount of infrastructure partnership program ought to be mobilized for coronavirus prevention and control. “I also request the government to introduce a special package to boost the morale of medics and security personnel who are on the frontline at a time when the country is battling against COVID-19.”

Another participant NCP lawmaker Ram Narayan Bidari sought clarification from the government’s side about the reason behind disapproval of medical equipment support proposed by China. “As far as the relief distribution is concerned, it should be executed through ward members under the supervision of ward chairperson,” he opined.

Coming down heavily against the government for not being able to provide quarantine facility to India returnees just like the students who had returned from China were kept in quarantine, lawmaker from Samajbadi Party Pramila Kumari argued that it has created a situation of chaos and heightened risk of more infections.

Participants mainly discussed upon various issues including the efforts made by local governments, attempts executed by the federal and provincial governments to curb the spread of COVID-19 and its treatment, problems faced by general public due to lock down and the role of people’s representatives.

Those stranded in Lalitpur sent to Sindhuli (with photos)

LALITPUR, April 18: A group of 47 people who were stranded in Lubhu, Lalitpur have been sent to their villages... Read More...