KATHMANDU, April 2: The Federation of Nepali Journalists (FNJ) on Thursday objected to the incident of removing news item by hacking into Kathmandupress.com, a Kathmandu-based online news portal.

Issuing a strong-worded press release today, the umbrella organization of Nepali journalists accused Prime Minister KP Sharma Oli's political and press advisors of exerting pressure on a software company to delete the news by illegally hacking into the online portal. According to FNJ, the Kathmandu Press management informed about the incident that it had to face on Wednesday.

"We learnt that the news item was removed and the online portal was suspended for the time being apparently under the pressure from the PM's political and press advisors," it said. 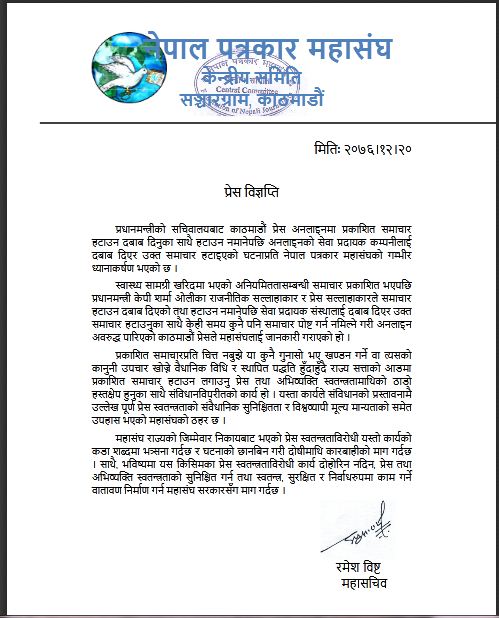 The FNJ said that its serious attention was drawn towards the incident of deleting news content from the online news portal under the pressure of Prime Minister KP Sharma Oli's secretariat.

"One has right to express their dissent, refute contents of the press or seek legal remedies. But, removing a news content from the online portal goes against the principle of press freedom as enshrined in the constitution. These sorts of acts are against the spirit of constitutionally-guaranteed freedom of expression and universal values of free press," it said.

Deploring the incident, the FNJ urged the government to take action against those involved in the incident.

Meanwhile, Kathmandu Press issued a press statement today and said that it is now in consultation with legal experts to seek legal means. 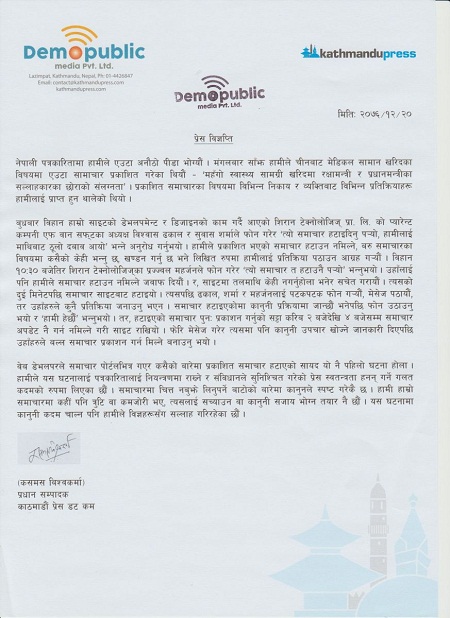 KATHMANDU, April 2: A software company owned by Asgar Ali, the IT Consultant to the Prime Minister, has landed into... Read More...

Half a dozen prime ministerial aspirants in NC
37 minutes ago