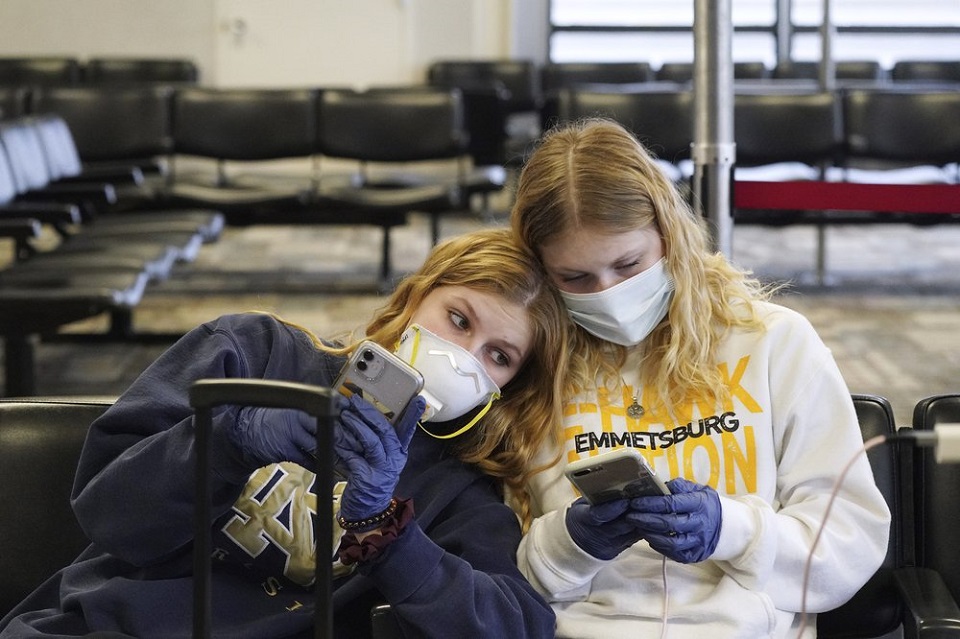 Rachel Miner, 15, left, of Emmetsburg, Iowa, sits with Carlotta Haas, 15, a foreign exchange student from Duesseldorf, Germany, who had been living with Miner and her family but was called home, as they waited for her flight Wednesday, March 25, 2020, in at Minneapolis-St. Paul International Airport in Minneapolis. (Anthony Souffle/Star Tribune via AP)

NEW YORK, March 26: U.S. deaths from the coronavirus pandemic topped 1,000 in another grim milestone for a global outbreak that is taking lives and wreaking havoc on economies and the established routines of ordinary life.

In a recognition of the scale of the threat, the U.S. Senate late Wednesday passed an unparalleled $2.2 trillion economic rescue package steering aid to businesses, workers and health care systems.

The unanimous vote came despite misgivings on both sides about whether it goes too far or not far enough and capped days of difficult negotiations as Washington confronted a national challenge unlike it has ever faced. The 880-page measure is the largest economic relief bill in U.S. history.

Worldwide, the death toll climbed past 21,000, according to a running count kept by Johns Hopkins University, and the U.S. had 1,050 deaths and nearly 70,000 infections.

Spain’s death toll has risen past 3,400, eclipsing that of China, where the virus was first detected in December and is now second only to that of Italy, which has 7,500. Lidia Perera, a nurse at Madrid’s 1,000-bed Hospital de la Paz, said more workers were desperately needed. “We are collapsing,” Perera said.

The Spanish parliament voted to allow the government to extend strict stay-at-home rules and business closings until April 11.

Such measures are becoming increasingly common in the U.S., where New York is the epicenter of the domestic outbreak, accounting for more than 30,000 cases and close to 300 deaths, most of them in New York City.

Public health officials in the city hunted down beds and medical equipment and called for more doctors and nurses for fear the number of sick patients will overwhelm hospitals as has happened in Italy and Spain.

A makeshift morgue was set up outside Bellevue Hospital, and the city’s police, their ranks dwindling as more fall ill, were told to patrol nearly empty streets to enforce social distancing.

In Washington, President Donald Trump has called for Americans to dedicate themselves to social distancing for 15 days, including staying home from work and closing bars and restaurants to help try to stall the spread of the disease.

Yet, he has also grumbled that “our country wasn’t built to be shut down” and vowed not to allow “the cure be worse than the problem” — apparently concerned that the outbreak’s devastating effects on financial markets and employment will harm his chances for reelection later this year.

“The LameStream Media is the dominant force in trying to get me to keep our Country closed as long as possible in the hope that it will be detrimental to my election success,” Trump tweeted Wednesday.

Democrats say that Trump was prioritizing the economy over the health and safety of Americans.

“I’d like to say, let’s get back to work next Friday,” said Joe Biden, the front-runner for the Democratic presidential nomination. ”That’d be wonderful. But it can’t be arbitrary.”

Biden said the congressional aid package addressing the outbreak “goes a long way,” but that “meticulous oversight” is required.

“We’re going to need to make sure the money gets out quickly into peoples’ pockets and to keep a close watch on how corporations are using the taxpayer's funds that they receive, to make sure it goes to help workers, not rich CEOs or shareholders,” the former vice president said.

Brazil President Jair Bolsonaro has also called to reopen schools and businesses, contending a clampdown ordered by many governors will deeply wound the economy and spark social unrest. He called for only high-risk people to quarantine and for governors to lift their stricter measures.

Meanwhile, the governor of a state in central Mexico said the poor are “immune” to the coronavirus, even as the federal government suspended all non-essential government activities.

Puebla Gov. Miguel Barbosa’s comment was apparently partly a response to statistics showing that the wealthy, who travel much more, have made up a significant percentage of Mexicans infected to date, including some prominent businessmen. The country has seen six deaths so far.

“The majority are wealthy people. If you are rich, you are at risk. If you are poor, no,” Barbosa said. “We poor people, we are immune.”

Barbosa also appeared to be playing on an old stereotype held by some Mexicans that poor sanitation standards may have strengthened their immune systems by exposing them to bacteria or other bugs.

Thailand’s capital, Bangkok, saw a drastic reduction in crowds and traffic on the first day of a national state of emergency declared to cope with the virus. The elevated Skytrain mass transit system was largely empty during the normal rush hour and the main bus station was quiet after the departure over the past week of many workers whose homes are in rural provinces.

Outside the usually throbbing city, checkpoints were set up to find travelers with symptoms of the disease. The state of emergency allows the government to implement curfews, censor the media, disperse gatherings and deploy the military for enforcement.

Leaders of four Japanese prefectures whose residents commute to work and school in Tokyo asked people to avoid non-essential visits to the capital. The calls come a day after Tokyo Gov. Yuriko Koike asked city residents to work from home if possible and avoid going out on the weekend. She said Tokyo is on the verge of a possible explosive increase in infections.

Pakistani officials said a representative of an Islamic organization spread coronavirus on the outskirts of capital by visiting mosques and going house to house with other clerics. Several clerics and residents are among the 25 people who tested positive in Islamabad. Pakistan’s total of nearly 1,100 cases prompted efforts to persuade the country’s more than 200 million people to stay home.

Beginning Friday, South Korea will enforce 14-day quarantines on its nationals and foreigners with long-term stay visas arriving from the United States. It already applies to arrivals from Europe. South Koreans can be sued and foreigners expelled for failing to heed the order.

China’s National Health Commission says its 67 new COVID-19 cases were all in recent arrivals from abroad. Once again, there were no new cases reported in Wuhan, the original epicenter of the illness and which remains under some restrictions until April 8. The government is trying to restart the world’s second-largest economy as its cases subside. Of the more than 81,000 people infected, more than 74,000 have been released from treatment, while just under 4,000 remain in care.

British Prime Minister Boris Johnson said more than 400,000 people responded within a day to the government’s call for volunteers to help the country’s most vulnerable people.

The Pentagon halted for 60 days the movement of U.S. troops and Defense Department civilians overseas, a measure expected to affect about 90,000 troops scheduled to deploy or return from abroad.

For most people, the coronavirus causes mild or moderate symptoms, such as fever and cough that clear up in two to three weeks. For some, especially older adults and people with existing health problems, it can cause more severe illness, including pneumonia and death.

PARIS, Aug 1:  Mexico now has the third most COVID-19 deaths in the world, behind the United States and Brazil, while... Read More...

KATHMANDU, June 26: The Ministry of Health and Population (MoHP) has reported the 27th Covid-19 death case in Nepal on... Read More...