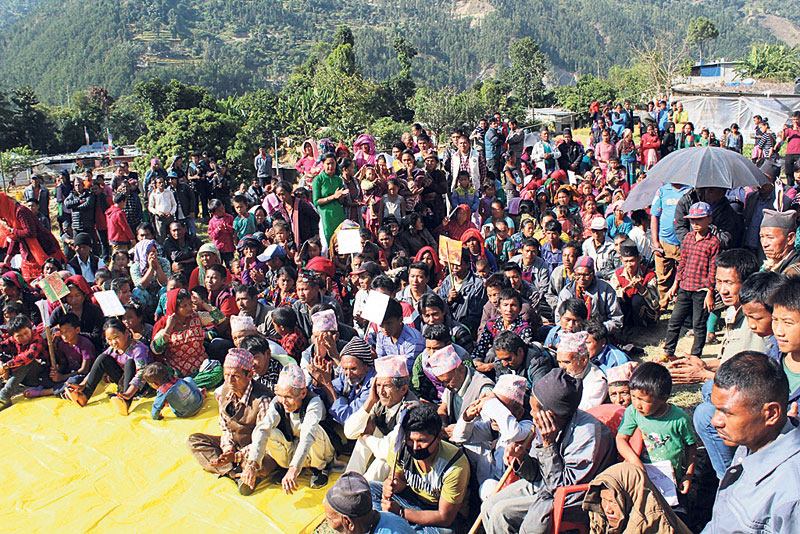 We have been hearing such sweet-sounding assurances since the earthquakes. Nothing has changed so far. We are sure that the politicians don’t feel our plight. Otherwise, we would not have been left in the lurch.
– Mendo Tamang,
a quake victim at the Laharepauwa camp

Along with others hit by the disaster in the VDC, Lama's family also deserted and fled for safety and started living in makeshift tents in Laharepauwa camp on a rented piece of land. Their life became miserable in these makeshift tents in the days, months and seasons that followed. Lama said many small babies and elderly people, who had initially survived the disaster, died in lack of care and basic amenities in these tents, mostly during the winter.

While most of their lives have not changed, seasons have changed and once again winter has come knocking in. The prospect of living in tents for another winter is terrifying these victims. Due to delayed reconstruction process, they still don't have proper house to shield off the winter chill. “Last year, we were living in a hope that things would be better in coming days. However, even this winter, circumstances have remained the same,” Chekku lamented.

Haku is one of the VDCs in the district that was totally destroyed by the earthquake. The extent of destruction was so much that, life of its resident was thrown out of gear. “We hear that people have made progress in some earthquake affected areas of the district.

But considering the lack of initiatives around here, it seems that we have been left to live with our miseries,” he said asking, “How long are we supposed to live like this?”

Chekku had asked this question to a government official who was participating in an interaction program with earthquake victims that are living at the camp. However, the official who had reached here from Kathmandu did not show zeal to answer. Lama kept adding, “It has been nearly two years that thousand of our families are living without a house. What is the government doing?” These questions remained questions.

Ashabir Tamang, who lost nine of his family members to the earthquake, also took turn to vent his anger. “I would have died if I was not rescued from the debris. Coming now, I feel that it would have been better if I had died too. There is no meaning in life once you lose all your family members. On top of all my loss, I don't have a house to live in and this has deprived me of comfort in winter and summer,” he said adding he survived his family only to suffer.

Tamang added that the locals would have geared up to build house on their own if their land was not washed away. He informed that displaced families were living in camps which are constructed on rented lands. He accused the government of keeping mum, while the displaced were being forced to pay rent for the land, let alone supporting them to get back to normal life.

“If the government had provided us better or safer place to move on, we would go. Where to go without any direction? We are not in a situation where we can afford buying land and constructing a home,” he said accusing the government and political leaders of engaging in just power struggle.

Mendo Tamang, another earthquake victim from the camp, stated earthquake victims in neighboring villages have been provided with assistance and are already in better living conditions than theirs. Many of them have already started building concrete house with the government provided aid, she said. “However, we are still living in tents and I don't see any initiatives taking place around here for helping us out. We cannot pay any longer for the land we are living in and we wont sustain another cold winter in tent,” she said.

Most of the families living at this camp have lost one or more family members to the earthquake. This has left them emotionally unwell and vulnerable. Mendo says that many victims wish to relocate in areas near to their past settlement to avoid the feeling of displaced from their ancestral place. “But that place is not safe to live in.  Landslides have damaged most of the residential land there,” she said.

We have been hearing such sweet-sounding assurances since becoming victim to the earthquakes. So far nothing has changed. We are sure that the politicians don't feel our plight. Otherwise, we would not have been left in the lurch.

Mendo Tamang, a quake victim at the Laharepauwa camp

Speakers at the program including lawmaker from Rasuwa, Janardan Dhakal assured the victims that their grievances would be addressed. “We have taken notice of all the problems. Things are progressing in other places. We will make efforts to expedite work here too,” said Dhakal.

Reacting to this, Mendo stated that 'assurances are old stories'. Quake victims know well by now that politicians' visit to their camps and their assurances can't make any differences to their plights, she said. “We have been hearing such sweet-sounding assurances since becoming victim to the earthquakes. So far nothing has changed. We are sure that the politicians don't feel our plight. Otherwise, we would not have been left in the lurch.”

Dhruba Sharma, member of National Reconstruction Authority, who was present at the interaction program, blamed the district authorities for the delays in reconstruction work.

“Delays in reconstruction and rehabilitation have been due to the sluggish performance of district level authorities. Finding suitable place for resettlement, registration of land and so on is in the domain of the district office. And that work was has not progressed yet,” he said.

In defense, District Administration Officer Krishna Prasad Adhikari shifted the blame on 'complexities' in acquiring land and transferring ownership to the victims. “It is challenging to find land for relocating the victims. Higher authorities must intervene in expediting these tasks for us to speed up reconstruction process,” he said.