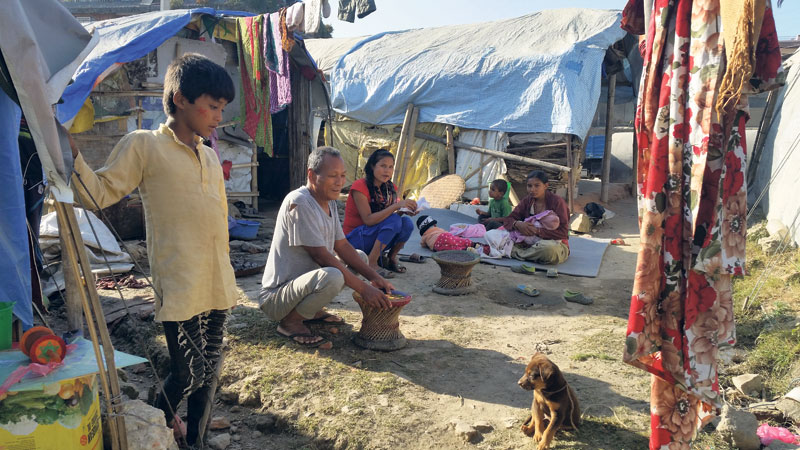 KATHMANDU, Nov 10: As winter is fast approaching, earthquake victims taking shelter under makeshift tents in Chuchepati of Kathmandu are facing hardships once again.

Even after 18 months since the massive earthquakes of April and May 2015, there is no progress in the economic and social condition of these quake victims. Also, without any proper support from the government, they are left to survive on their own.

Various NGOs and INGOs have been providing them with relief materials like tents and ration, but the flow of such relief has slowed down significantly in the recent days. For instance, Noble Compassionate Volunteer Group, an NGO, had been providing sanitation facilities and water supplies for these people at Chuchepati. However, they have stopped the support since three months reportedly due to expiry of their project term.

Apparently, there are now around fifteen hundred people living on this ground in Chuchepati. People from all over Nepal came to this sanctuary after the earthquake.

Some of them had lost their houses during the quakes, while most of the tenants came here as they could not get rooms at affordable rate.

“Lack of financial support is the main problem. We all want to rebuild our homes and live in proper buildings. If we had such facilities, why would we live here?” lamented Brestapati Lama, 49, who has been living at Chuchepati.

Another victim Rammaya BK, 31, informed about the difficulty in seeking employment due to lack of proper shelter. “I could have worked to earn some money but there would be nobody to look after our belongings in the tent,” she said. Her husband is working as a laborer at a construction site. They have to do with whatever little earning he makes.

The government has said they couldn’t provide support due to delay in assessing quake-damaged structures. They also declared that they have completed assessment and will now begin distributing funds for reconstruction.

So far, the victims who want to rebuild their houses have not received the government-promised amount of Rs 300,000.

On Wednesday, the government released a statement pledging Rs 3.57 billion to the Ministry of Federal Affairs and Local Development, mandating it to channelize the first tranche of reconstruction grants to the earthquake victims.