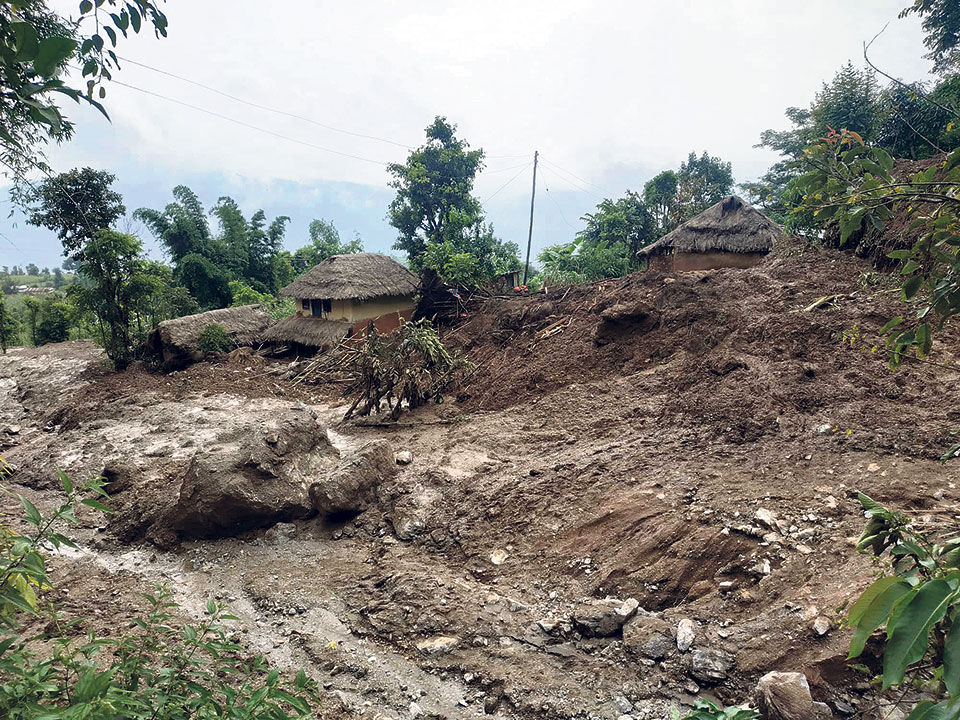 The landslide-hit settlement at Limgha in Satyawati Rural Municipality in Gulmi on Tuesday. At least nine people were killed and four are missing when landslides hit Limgha and Thulolumpek villages in the rural municipality in the wee hours on Tuesday. Photo: ​Shiva Lal Subedi/Republica

GULMI, July 24: At least nine persons have died and four others are missing in Gulmi district after landslides triggered by torrential rains swept away the villages of Limgha and Thulolumpek in the wee hours of Tuesday.

Six locals in Limgha and three in Thulolumpek were buried by landslides. At least four persons in both villages are missing, informed Chief District Officer Yadunath Paudel. Local authorities said the toll could increase as chances of rescuing the missing are slim.

“More than 400 locals remain temporarily displaced. We rescued them from the villages that are at risk and they are now sheltering at local schools,” said CDO Paudel. “It was very difficult rescuing them from the sloping areas but we managed it using ropes,” he added.

Landslides swept away the villages while many were asleep. Some houses were buried in landslide mud.

Dan Bahadur Rana, ward chairperson in Thulolumpek, said the houses were swept some 50 meters downhill. “Since 20 houses are still at risk we have relocated the inhabitants to Saraswati Higher Secondary,” said Rana.

Landslides have damaged roads, making it difficult to reach out to the disaster areas.

Landslides are common in hill districts like Gulmi. Scores die in natural disasters every year.

Over 100 have been killed in calamities since the monsoon began in June.

GULMI, September 5: Potters of Gulmi, who had been making traditional pottery so far, has started trying out new designs. ... Read More...