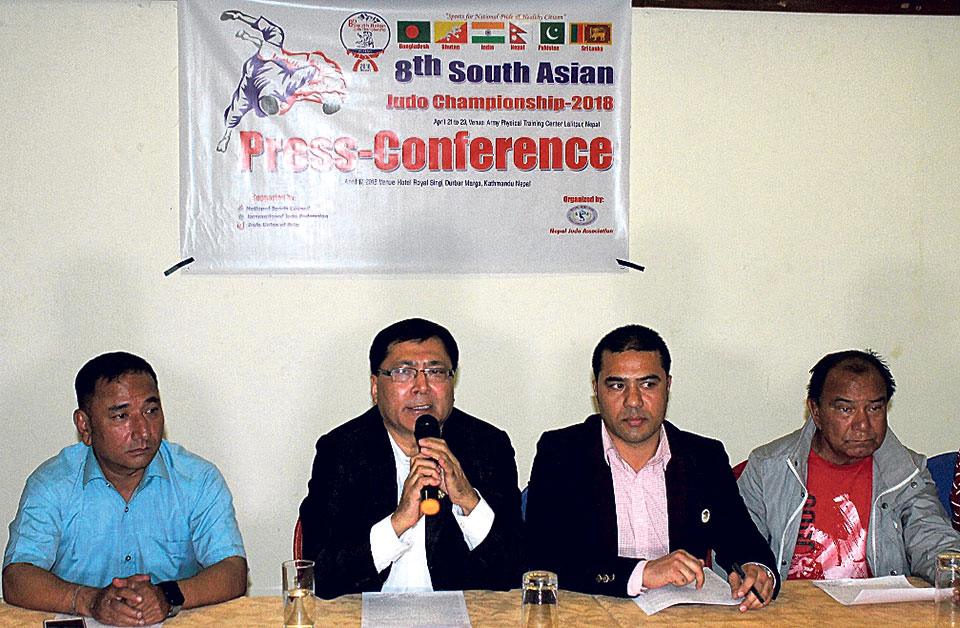 Speaking at a press meet in the capital on Tuesday, the organizers informed that the preparations for the tournament have been completed.

The association’s General secretary Dharma Kumar Shrestha said that Bangladesh, Bhutan, India, Pakistan, host Nepal and Sri Lanka will take part in the tournament, while the Maldives will not take part this time.  A total of 102 players will be fighting for seven golds, seven silvers and 14 bronzes in men’s and women’s individual categories each, while they will be contesting for one gold, one silver and two bronzes in the men’s and women’s team events each.

Nepal will have two teams in the regional competition while all other participating countries will field one team each comprising of 9 male players and 9 female players. Nepal, by the virtue of being the host, will be allowed to feature 36 players divided in team A and B.

Meanwhile, Nepal Judo Association President Deepak Harsha Bajracharya informed that the tournament is a preparation for the upcoming Asian Games.

“We are preparing for the Asian Games and we have set the goal of qualifying in the Olympics directly and not from wild card,’’ said Bajracharya, adding, “We have the target of winning medals in Asian Games and gold medals in the South Asian Games.’’

The association further informed that the total expense of the tournament is Rs 5 million, while the National Sports Council (NSC) has provided Rs 2 million and International Judo Association (IJA) and Judo Union of Asia (JUA) have pledged Rs 1 million each.

POKHARA, Jan 8: The 12th South Asian Seven-a-side Football Championship is going to be organised in Pokhara from January 13-18. Read More...