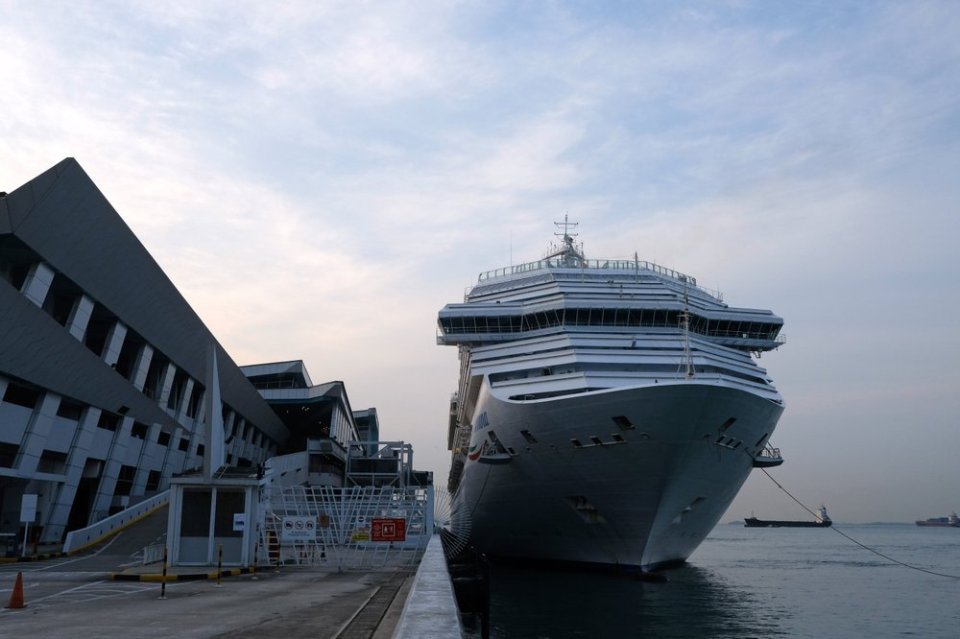 The Costa Fortuna cruise ship is docked at the Marina Bay Cruise Center Singapore on Tuesday, March 10, 2020. Singapore has allowed the Costa Fortuna to dock after it was rejected by Thailand and Malaysia. Singapore's port authority and tourism board said in a joint statement Monday, March 9, that the ship has declared that none of its passengers had any symptoms of respiratory illness.(AP Photo/Ee Ming Toh)

March 10: The Latest on the coronavirus outbreak sweeping the globe (all times local): A cruise ship barred from Thailand and Malaysia due to coronavirus fears has returned to Singapore a week after it set sail from the city-state.

Passengers wheeling luggage off the Costa Fortuna were ushered to waiting coaches and ferried away Tuesday morning. Most were not wearing masks. Some passengers told reporters at the scene everything was great and that everyone aboard the ship was fine.

No cases of infection with the new virus has been confirmed in the ship. Singapore authorities previously said doctors would check people before they disembarked.

The ship was refused docking in Thailand because it carried 64 Italians and that country has been the epicenter of Europe’s outbreak. Malaysia also turned away the ship.

Singapore allowed the ship to dock because it had been scheduled and all passengers on board had been screened before the ship sailed.

The virus is a concern on cruise ships after hundreds became infected on a ship that was under quarantine at a Japanese port last month. A ship that docked in California on Monday let off its passengers to face quarantines at U.S. facilities or in their home countries. Twenty-one people on that ship are infected.

South Korea’s professional baseball league has postponed its season to sometime during mid-April due to the coronavirus.

The Korea Baseball Organization said Tuesday it still hopes to maintain a 144-game regular-season schedule but will consider banning spectators from some games when risks of infections are high.

South Korea’s professional basketball league has halted its regular season since Feb. 29, while the soccer league has postponed the start of its new season.

The season was to open on March 20. It might start some time in April.

BANGKOK, March 2: Thailand has reported one new coronavirus case, bringing the total number of such cases in the country... Read More...