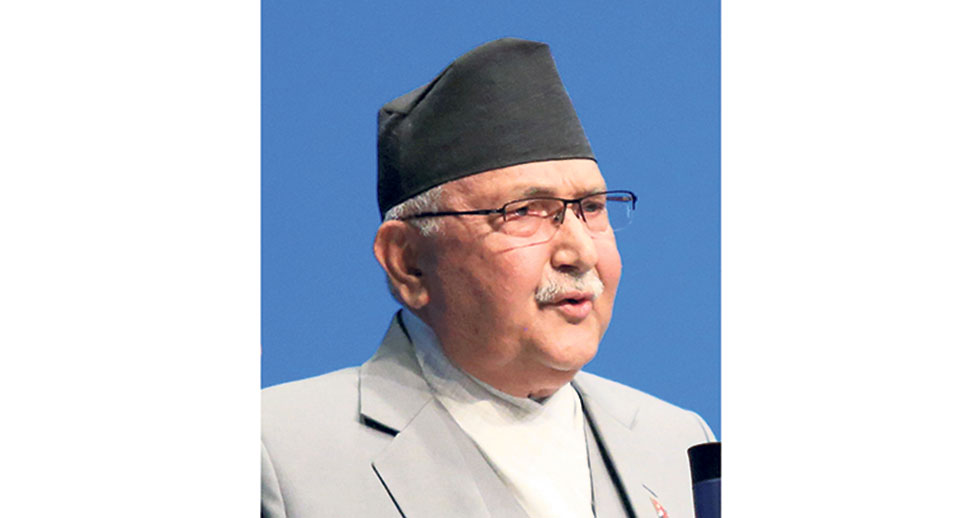 KATHMANDU, Feb 16: Prime Minister KP Sharma Oli on Saturday complained that his government was being unfairly criticized by media and civil society because of ‘ideological prejudice’, in spite of its ‘remarkable progress’ in the past two years.

In an address to parliament on the occasion of his completing two years in office, PM Oli said that the intentions of his government were often questioned whenever he came up with new policies and ideas under his ambitious program of 'Prosperous Nepal Happy Nepali’.

Stating that the two years were spent in completing the foundations of federalism such as drafting the laws and arranging the resources for the provincial and local governments, Oli said that federalism was now in full effect and the government would focus on implementing its dream projects in its remaining three years.

Oli’s comments come at a time when his government has been facing criticism within his own party and beyond for stirring up uncalled for controversies instead of delivering on the tall promises of election time. The Oli government was forced to retreat on the guthi (trusts) bill following protests in Kathmandu Valley and it has been facing stiff criticism for undermining freedom of expression while drafting some stringent media laws.

The  Oli government has also run into widespread backlash for riding roughshod over the law while leashing out nationalized land and physical infrastructure belonging to the then royal family to Yeti Holdings.

He has been accused of leasing out Gokarna Forest Resort to Yeti Holdings six years before the expiry of an existing lease and without going through a bidding process.

Oli, however, defended these decisions and threatened to initiate a probe into several lease agreements for former royal property signed away by the then governments of Sher Bahadur Deuba and Baburam Bhattarai.

“I’ll form a probe to look into those previous agreements,” he said.

The lease contracts for what is now Nepal Trust land at Durbarmarg, Shivapuri and Kalimati were signed without informing the public, he said. And those who signed those agreements are now criticizing the ‘legal decisions’ taken by his own government, he added.

Bowing to criticism, Oli hinted at revising some crucial bills including the National Human Rights Commission bill now pending in parliament and vowed not to compromise on the fundamental principles of democracy and human rights.

But he also said that despite criticism his government will complete the major development projects under the Millennium Challenge Corporation. These projects under MCC, according to him, would pave the way for exporting electricity to India and third countries.

The PM claimed that some dream projects—Keirung-Kathmandu-Lumbini Railway, East-west Railway, Nagdhunga-Thankot Tunnel among others --will begin soon. He said the completion of several under-construction hydro projects including Tamakoshi will significantly change the socio-economic status of the Nepali people.

His commitment to ambitious railway projects comes at a time when northern neighbor China, which had earlier shown interest, has recently pivoted instead to strengthening road connectivity between the two countries as railways would be time-consuming.

Oli went on to claim that his government was successful in reducing inflation to six percent from nine percent, expediting post-earthquake reconstruction, widening the scope of social security schemes and health insurance and expanding telecommunications and internet links.

He appraised parliament that Tribhuvan International Airport was upgraded after he came to power. As he told lawmakers, 37400 private houses destroyed in the earthquake were constructed. Apart from these, 300 government buildings, 2,600 plus school building and 325 cultural heritage sites were also reconstructed.

Oli also presented the action against those accused of involvement in the Lalita Niwas land scam as a feather in his cap even though he stands accused of arm-twisting the CIAA to let NCP bigwigs Bishnu Poudel and Madhav Kumar Nepal off the hook over the same affair.

“I returned government land that got registered as private property but it’s being presented as though I am the mastermind behind the whole scam,” Oli complained.

He urged the political parties and the general public to exercise restrain and show their support to make his dreams come true. “Rome was not built in one day,” he said.

Media is creating instability in the country: PM Oli  (with video)