This handout photo provided by Beijing-based Embassy of Nepal shows Nepali nationals on board the Airbus A330 wide-body aircraft at Wuhan before flying to Kathmandu on Saturday evening.

Out of 185 applicants, 4 decided to stay back whereas 6 were barred by Chinese authorities from boarding the plane due to medical reasons

BEIJING, Feb 16: The long wait for anxious Nepali citizens wishing to return home from China’s coronavirus-hit Hubei Province, the epicenter of the viral outbreak, is finally over with the arrival of a Nepal Airlines Corporation aircraft on Saturday evening for evacuation.

The NAC plane soon left Wuhan’s Tianhe International Airport for Kathmandu at around 11 pm (local time) carrying 175 Nepali nationals including two children living in Hubei Province, according to the Embassy of Nepal in Beijing.

Of the total 215 Nepalese residing in Hubei, 185 Nepali nationals, mostly university students, had expressed their desire to be evacuated from the city which is under lockdown by the Chinese government in an effort to prevent the spread of the deadly disease. Among them, only 175 were evacuated as four of them decided to stay back while six others were barred by Chinese authorities from boarding the aircraft due to medical reasons, according to Deputy Chief of Mission at the embassy, Sushil Kumar Lamsal. The six will be taken to their respective universities and put under quarantine, Lamsal said.

The Government of Nepal came to the rescue of the Nepali nationals after more than three weeks since China imposed a lockdown in Wuhan and other cities of Hubei Province to contain the menace of the fast-spreading epidemic, which has already claimed over 1,500 lives and left over 66,500 others infected across China.

Several South Asian neighbors including India, Sir Lanka and Bangladesh had evacuated their citizens from Hubei soon after the lockdown. With a growing number of countries evacuating their citizens day by day, many Nepali students in Hubei started making frantic calls for immediate evacuation, expressing concerns that they might get infected and that they were on the verge of mental breakdown for being holed up in their dormitories for weeks with limited mobility and food supplies.

But the prolonged delay in evacuating them due to the indifferent attitude shown by their own government left them bitterly exasperated.

On Saturday, more than one and a half months since the disease was first reported, the Nepali students stepped out of their dormitories in more than three weeks, wearing masks and disposable plastic gloves, carrying backpacks and dragging their luggage to leave for the Wuhan airport where the NAC Airbus A330 would land few hours later to evacuate them from China.

The embassy had arranged three buses to pick the evacuees up from Wuhan and six other cities in Hubei Province –Xi’an, Xiangyang, Enshi, Yichang, Jingmen and Jingzhou. All these cities are two to seven hours drive from Wuhan. The buses started picking them up from 10 am.

Once the students arrived at the designated pick-up points, all the students stood in queues before getting on their buses and went through one of the many temperature checks they would go through throughout the day before boarding the plane. 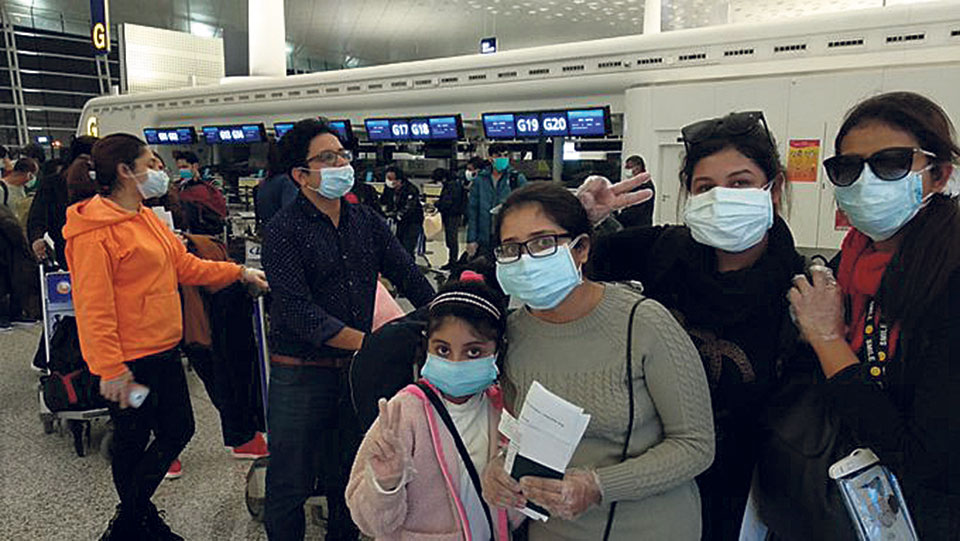 Nepali students at Wuhan’s airport before returning home on Saturday. Photo Courtesy: Imran Ahmad Khan
Nepali students express happiness
Yubaraj Thapa, a Nepali student in Wuhan, was one of the many students to board the NAC aircraft, which landed at the Wuhan airport at 10 pm local time on Saturday evening. He said he was happy that the government was evacuating him and other students even though it took such a long time to do so.

“I am ready to spend 14 days in quarantine in Nepal. Once that period is over, at least I become free to get reunited with my family. But here, the situation is still bad and who knows how long we still may have had to live in the dormitories had not we been evacuated today,” he said.

He thanked all those in Nepal who helped push the government to carry out the evacuation.

Imran Ahmad Khan, another Nepali student in Jingzhou of Hubei, was holed in his dormitory for the last 20 days. He was happy about being evacuated to Nepal but a little bit anxious at the same time.

“For all these days, I took all the preventive measures as far as possible to remain safe. But since Hubei is the center of the outbreak with a large number of infection cases, one cannot help but feel a bit worried of being infected from others when you get exposed to public places like the airport,” he said.

Even though some Pakistani students stranded in Hubei have been reported of being infected with the coronavirus, not a single Nepali national living in the province has been reportedly taken ill by this fatal virus so far.

The evacuees were accompanied by four health professionals, three pilots, seven crew members, an engineer, a technician and a dishwasher who came from Kathmandu in the flight.  The evacuation flight was scheduled to land at TIA in the wee hours of Sunday.

Govt extends lockdown by a week, borders to remain sealed

KATHMANDU, March 30: The government has decided to extend the nationwide lockdown for the second week until next Tuesday as... Read More...