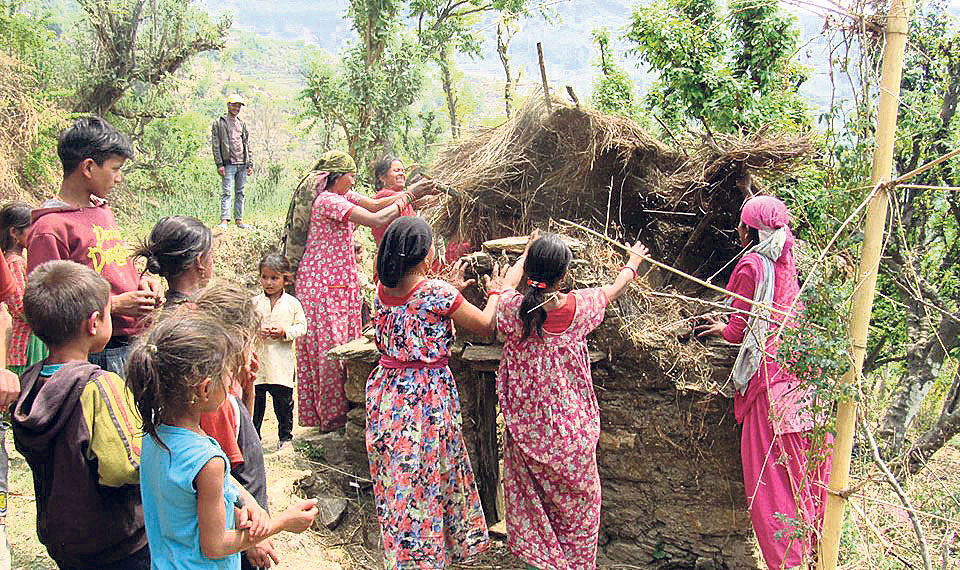 Hindson Bethan (2009) mentions that menstruation taboos universally prevailed up to the mid-twentieth century in the world although anthropologists and historians did not make these taboos the subject of research until recently. Likewise, M Guterman and others (2007) provide that major religions of the world, without exception, have placed restrictions on menstruating women. Judaism, Christianity, Islam, Hinduism, and Buddhism have made statements about menstruation and its negative effect on women, leading to prohibitions about physical intimacy, cooking, attending places of worship, and sometimes requiring women to live separately from men.

Today, menstruation taboos do not prevail in other parts of world as strictly as in Karnali and Far western part of Nepal. People in these places are observing menstruation taboos, like the world practiced slave trade and genital mutilations at one time.  Most countries abandoned menstruation taboos but as Nepali communities remain secluded in many respects from outer world and development they remain intact, like early marriage, untouchability, gender discrimination etc.

Big picture
Why does Chhaupadi system still remain in Nepal even in this post-modern era? We need to look into Chhaupadi system in a broader landscape. Now there are campaigns to dismantle Chhau sheds in Karnali region as if this will be a panacea to end all menstruation taboos.  Chhau sheds were dismantled many times in previous years too but they were soon built back. What made them do so? That’s because destroying Chhau sheds does not end the menstruation taboos. Mothers and sisters in these parts still observe this tradition even though it exposes them to death. Is this because they are not afraid to die? Or is it because their male counterparts want their mothers and sisters to die?

Lois Tyson (2014), the prominent feminist critic, opines that fates of women are so programmed with the patriarchal values that they cannot realize oppressions cast upon them. Further, they assume the patriarchal values as their own. Then they become what Tyson calls ‘patriarchal-women.’ In our context, our generations of mothers are ‘patriarchal-women’ who cannot realize the oppressions cast upon them through menstrual taboos. Instead, they feel proud of observing the Chhaupadi system and think that they are observing it for the betterment of their family and society. So even if they are told to live in their houses instead of sheds during menstruation, they cannot do so. On the one hand, they cannot go against social values and on the other the government asks them to break those values. The question is how to untangle them from patriarchal values.

Culture of conformity
A woman from Far-west told me that once during her adolescence she concealed her period. Now, in her late 40s and a high school teacher, she feels guilty about it although she knows that menstruation is nothing but a natural, physiological and biological process that occurs to all women under the sun.  This is one example of how deeply menstruation taboos are ingrained in women’s psyche.

Michael J Sandel (1998), a communitarian theorist, argues that social interests should override the individual interests so that the social order is maintained. Communities, where Chhaupadi is practiced, believe that it is being observed for overall common good of the women, families, and the community. They believe that letting women live inside the family house and allowing them to enter the kitchen and temples will violate the social norms and that will result in serious consequences for the family and the community. The individual may not be able to stand for personal liberties because such societies always prioritize communal good. If somebody dares go against, s/he might be boycotted by the communities.

Gayatri Chakravarti Spivak argues that issues and experiences of the underprivileged cannot be represented in true sense by the outsiders because the outsiders may not have developed the agency required to represent the issues and experiences of underprivileged or they might misrepresent or misinterpret those issues for their own benefits. If we analyze Chhaupadi from this perspective, real factors, causes and conditions of this system seem to be misrepresented. The programs and policies that stand on those misrepresentations do not function well.

RA Duff (2010), a criminological theorist, interestingly argues that the crimes of the societies need to be controlled by the social norms, customs, ethics, religions, morals etc. Thus criminal law must not be taken as the last resort for controlling the crime of Chhaupadi. Criminalization of human conducts is not enough to control the crimes. Chhaupadi has been criminalized in Nepal but it remains to be seen how it will contribute to eradication of menstruation taboos.

Many people used to get their daughters married off prior to their first menstruation because they believed that not doing so will bring sin onto themselves. Likewise, women used to observe child-birth taboos too. Such practice has become rare these days. Chhaupadi system is also not as strictly followed as it was in the past. Many educated women in the rural areas have started to live in their houses during the menstruation period.

We need to get to the bottom of why Chhaupadi persists and find ways to displace it accordingly. Superficial understanding will lead us nowhere.

KATHMANDU, Dec 29: It is going to be interesting to watch how the battle against Chhaupadi will unfold in the... Read More...