Battle against Chhaupadi in Karnali 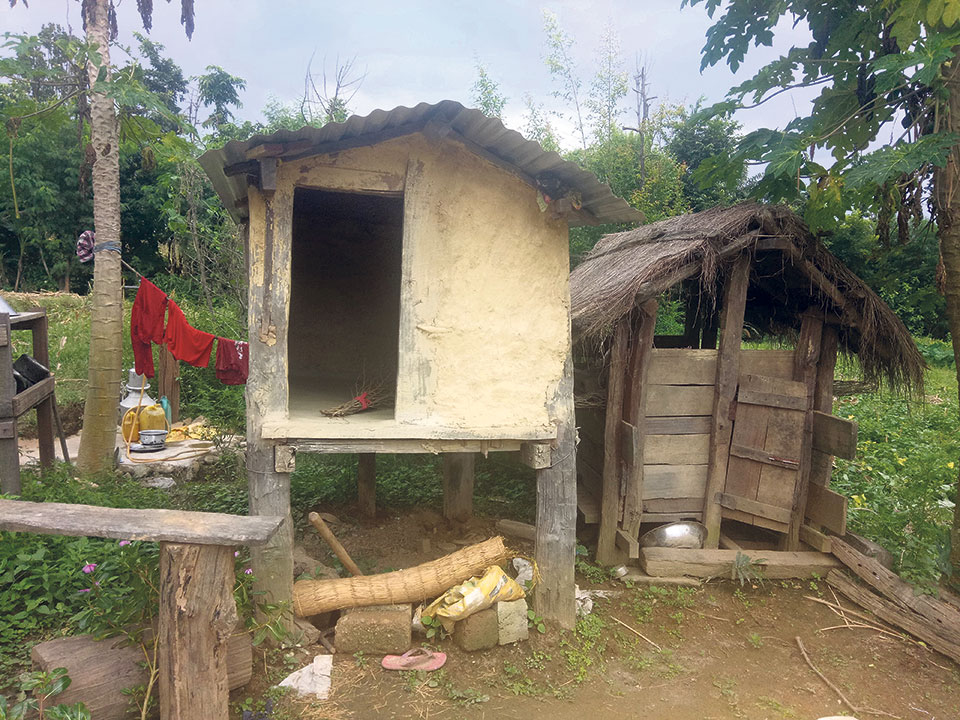 A chaupadi sheds in Sudur Paschim Province in this recent photo. Photo: Republica

KATHMANDU, Dec 29: It is going to be interesting to watch how the battle against Chhaupadi will unfold in the days to come because the government has decided to take the tough battle to the end this time. Apart from the arrest of a relative of a woman who died at a Chhaugoth (menstruation shed) two weeks ago, the government has announced that those who continue to practice it will be behind bars and will also be deprived of social security allowances and services.

Isolating women and girls during their menstruation and post-delivery is an age-old tradition in Dailekh, Jumla and Surkhet, among other districts in the western region which is still rock solid despite measures taken a number of times to dismantle the superstition. According to several young people in those areas, who say they do not believe in this ill practice, they cannot however stand against it due to the fear of being ostracized. That should be the reason why Chhau sheds were rebuilt in almost equal numbers in the then Guthu VDC of Surkhet after they were once destroyed in 2015 under a massive campaign.

A total of 193 community and personal Chhau sheds were destroyed by the VDC in coordination with some social organizations. Four years down the line, not just commoners, government staffers and local representatives do have chhau sheds here to keep the family’s female members away from home as they bleed. And when that is done, women become vulnerable to sexual abuse, animal attack, suffocation and thus injuries and death. As many as 15 girls and women in Acchham and Dailekh districts alone have succumbed to the Chhau culture in the last 13 years, as per the data of National Human Rights Commission.

This time, the arrest following the death on December 2, of Parbati Budha Rawat, 21, of Achham and subsequently the government’s aggressive circulation against the practice has alarmed everyone. On the one hand, there is deep faith among the people who think their deity hates the ‘impure’ blood of women and girls and thus not banishing them to Chhau sheds can bring misfortunes, while on the other hand, there is the administration which is not going to ‘spare anyone anymore in the name of culture.’

The Chhau custom was outlawed in 2015 though society has kept it alive so far.

According to a health worker Pabitra Giri of Barahatal Rural Muncipality – 6, the government’s harsh step is a welcome move, but ‘taming’ the superstitious communities is not easy.

Being an educated health staff, Giri is not supposed to follow the Chhau custom, but she does.

“You follow the norms of society you live in simply because you don’t want to bring troubles to yourself. I cannot do what I alone believe in, I have to follow the society’s ways,” she said. She added that every house in her village, Birauni, has a Chhau shed.

Chief district officers (CDOs) in the western districts have been ordered to bring the Chhau culture to an end and the home ministry is carefully watching the development. The CDOs now have to tackle both those who follow the tradition (women and girls) and those who make them do so. Local police officers and representatives have been working hard to build an action plan to address the issue.

“We have decided to destroy all Chhau sheds. In the first phase, sheds at the houses of government staffers and local representatives will be dismantled,” said CDO of Surkhet, Basanta Adhikari. “There are other measures we are taking to do away with the Chhau culture,” he added.

According to CDO Adhikari, there are Chhau sheds at three among nine local units in Surkhet. At Panchapuri, there might be 500 and at Chaukune there must be around 100 sheds, he assumes.

“We are collecting the details. Soon we will have the exact data in hand, and we will start the campaign to destroy those sheds,” he added.

Durga Banjade, CDO of Jumla also expressed commitment to take strict action against Chhau related practices. Until and unless religious and cultural biases against women are fought to the end, women cannot be empowered in the real sense, she said, adding that the ‘anarchy in the name of Chhaupadi should be stopped and she will do whatever it takes for it’.

Meanwhile, CDO of Dailekh, Yubaraj Kattel stressed the need for raising awareness along with taking legal action against Chhaupadi.

“We have received strict orders from the government to go aggressive against Chhaupadi. Chhau related fear is deep rooted in the minds of the people. We must handle things very carefully; both taking legal action and raising awareness should go hand in hand,” he maintained.

(Our corrrespondents Nagendra Upadhyay from Surkhet, DB Budha from Jumla and Govinda KC from Dailekh contributed to this story)