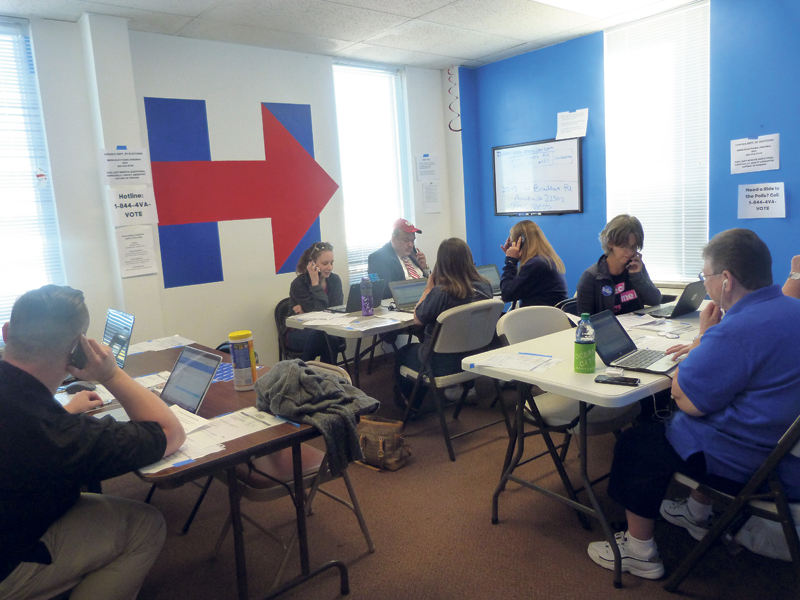 WASHINGTON DC, Nov 7: Laura Lawson, the phone bank captain at the Alexandria office of Democratic Party in Virginia, was busy throughout Saturday in training the volunteers coming at her office in the last minute to support their candidate Hillary Clinton.

Around four dozen volunteers were continuously making phone calls and asking people about their plans for the Election Day, November 8, Tuesday. They were also suggesting fellow Americans to 'go out and vote'.

As volunteers were coming at the office in shifts, Lawson was busy reminding them not to talk any negative but just to remind people to go out and vote.

"Virginia is a blue state, the state almost certain to win by the Democratic Party.

However, we are busy to remind people to go out and vote as it's their right," said Emily Puente, the staging location captain at the same office.

"This office is for phone banking. We have another office in Alexandria, which is looking into things related to canvassing at grassroots, which means campaigning door-to-door," she added.

Campaigners of Republican candidates Donald Trump are also doing the same throughout the country.

Stump speeches, huge increment in advertisement spending, phone banking, canvassing at grassroots are all going on with only two days remaining for the United States Presidential Election while the whole world is looking at it anxiously not only because the US politics influences rest of the world but also it is an unique election.

Polls and Money matters
Election polls are showing a close battle between Clinton and Trump. Clinton has a smaller lead in the last moment than the one she had before the Federal Bureau of Investigation announced it was looking at newly discovered emails possibly related to her private email server, which she had set up during her term as Secretary of State.

As per the recent polls, Clinton leads 45 percent to 43 percent in a new Fox News Survey while CNN's Poll of Polls shows her at 47 percent and Trump at 42.

As the race has turned out to be tough, both, Clinton and Trump, has been not only spending their times in battleground states but also money. Business reports are saying that the money started flowing fast into television market in the last week before the election.

Bloomberg stated that Clinton increased her television advertisement spending in 14 states by 86 percent compared to her spending on October 18.

According to reports, Clinton Campaign is spending $ 29.6 million in the last week in the battleground states for television advertisements while it is said that Trump is spending around $15 million. Borrell Associates had projected $830 million expenditure from both the candidates during the election in radio advertisements only.

"Money matters in the US Elections. You need good amount of money from the beginning to lobby in your favor, to hire campaign strategists and staffs, to spend for publicity materials and to spend for advertisements. It is similar case in every election, be it a town election or Presidential election," said Keri Thompson, who is contesting independently for state representative from Third Plymouth District of Massachusetts.

"It is impossible for independent candidates to win the election in the present US system," she argued.

Some Unique features of US election

- In the US, all general elections of public officials are held in November. Presidential election is held in every four year while election of House of Representatives is held in every two years. Certain numbers of senators are elected in every two years in the 100-member Senate.
- The Law for General Elections of Public Officials has stated that election should occur on the Tuesday immediately after the first Monday in November. The law determines that all the US elections take place in between November 2 to 8 in every even numbered year.

- Voter turnout in the US Election is low in comparison to other developed countries like Belgium and Sweden. It is said that only around 60 percent of eligible voters cast their vote in the elections held along with the Presidential Election. The turnout even lowers up to 40 percent in the midterm election held in every two years.

-    The USA has a unique provision of early voting in some of the states. Registered voters can cast their votes prior to the election dates. US Media has reported that around 34 million voters have already casted their votes for the Presidential Election this time. Though it is a complex provision, the early voters in six of such states have the right to alter their votes once even after casting the votes.

In some of the states, voters are given ballot questions along with the election ballot as a referendum to decide on certain debatable issues.  Massachusetts, this time, has four ballot questions to decide on including whether to legalize the use, cultivation, possession and distribution of recreational marijuana for individuals of at least 21 years old.

BARCELONA, April 30: Barcelona and Real Madrid maintained their neck-and-neck title race in the Spanish league on Saturday, when both... Read More...

Other side of conflict and the Oscar race

Central leaders to former lawmakers in race of local polls

GORKHA, May 3: Candidates in Gorkha district for the local polls, which are just 10 days away, range from central leaders... Read More...