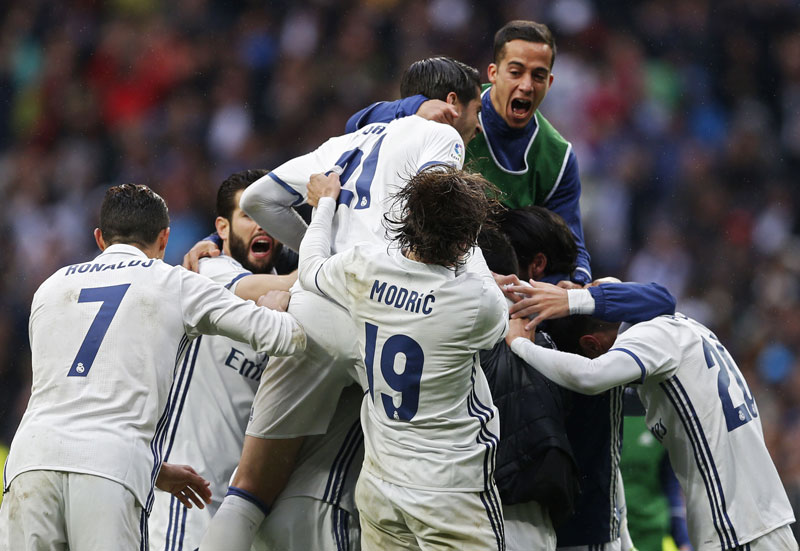 BARCELONA, April 30: Barcelona and Real Madrid maintained their neck-and-neck title race in the Spanish league on Saturday, when both teams won to stay level on points at the top.

Luis Suarez scored twice and Lionel Messi set up another goal to give Barcelona a 3-0 victory at crosstown rival Espanyol, while Real Madrid needed a late strike by Marcelo after Cristiano Ronaldo had missed a penalty to secure a 2-1 win over Valencia at home.

"We had to bring out our fighting spirit and show who we are," Marcelo said. "We want to win every match we have left. Our goal is to go game by game."

The victories left Barcelona ahead of Madrid on the head-to-head record thanks to its win in the Spanish capital two rounds ago. Madrid, however, has four matches left compared to Barcelona's three and can ensure it lifts its first Liga title since 2012 if it wins all of them.

"We will have to win all our games to keep the pressure on," Suarez said.

While Barcelona can rest ahead of the next round, Madrid must now prepare for its Champions League semifinal against Atletico Madrid on Tuesday.

Atletico primed its attack for the upcoming European derby by rolling to a 5-0 victory at Las Palmas.

Espanyol defended well until the 50th minute when Suarez pounced on an ill-advised back pass by Jose Jurado that left him space to size up Diego Lopez before stabbing a shot past the goalkeeper.

Messi, who had scored a brace of goals in the last three league matches, set up Ivan Rakitic in the 76th before Suarez got another gift from Espanyol's Aaron Martin. The defender flubbed a clearance, leaving Suarez to round Lopez and complete his double.

Jurado's night to forget started with him missing an excellent opportunity to give Espanyol the lead just three minutes in when he was alone but sent his shot trickling wide.

"Our intensity, desire and ambition gave us the three points," Suarez said after ending his five-match scoring drought on the way to taking his league tally to 26 goals on the season.

Ronaldo put Madrid ahead in the 27th when Valencia's markers lost track of the Portugal forward, leaving him alone to nod in Dani Carvajal's cross.

Ronaldo then had an excellent chance to add to his 20 league goals this season in the 57th after a questionable penalty when Luka Modric fell after contact with Dani Parejo.

But Valencia's penalty-stopping expert Diego Alves smothered his strike, taking his tally to six saved spot kicks in the season and 26 saves in 53 penalties since playing in the Spanish league. Three of those saves have come against Ronaldo.

Parejo made Marcelo's late goal necessary for Madrid when the Valencia midfielder leveled in the 82nd by bending a free kick up and over the wall.

Facing a damaging setback to Madrid's title hopes, Marcelo cut back to open a firing angle through a packed area before scoring the dramatic winner with just six minutes remaining.

"I would like to have ensured the win before, but we know that we can score in any moment and through any player," Madrid coach Zinedine Zidane said. "Today it was one of our defenders."

Kevin Gameiro struck twice and Saul Niguez added another goal for Atletico before 20 minutes were up. Substitutes Thomas Partey and Fernando Torres rounded off the demolition for Diego Simeone's side.

The win left Atletico in third place — three points ahead of Sevilla, which plays at Malaga on Monday.

The only downside was a left-leg injury to defender Jose Gimenez, leaving him in doubt for Tuesday's match when Atletico will try to avenge losses in the Champions League final to Madrid in 2014 and 2016.

Granada became the second team to be relegated — after last-placed Osasuna — following a fifth straight defeat, including three under new coach Tony Adams.

Levante earned promotion to the top flight after a 1-0 win over Oviedo.

Levante, which was relegated last season, ensured its return with six rounds left in the second division.

VILA-REAL, April 3: Barcelona’s Lionel Messi came off the bench in his side’s hour of need to inspire the Liga... Read More...

Claiming it’s not an outrage after defeat, Thapa again accuses former King Gyandendra Shah of interfering in RPP General Convention
23 hours ago
Nepali Rupee falls to a two-month low against US dollar backed by recovery of the US economy
19 hours ago