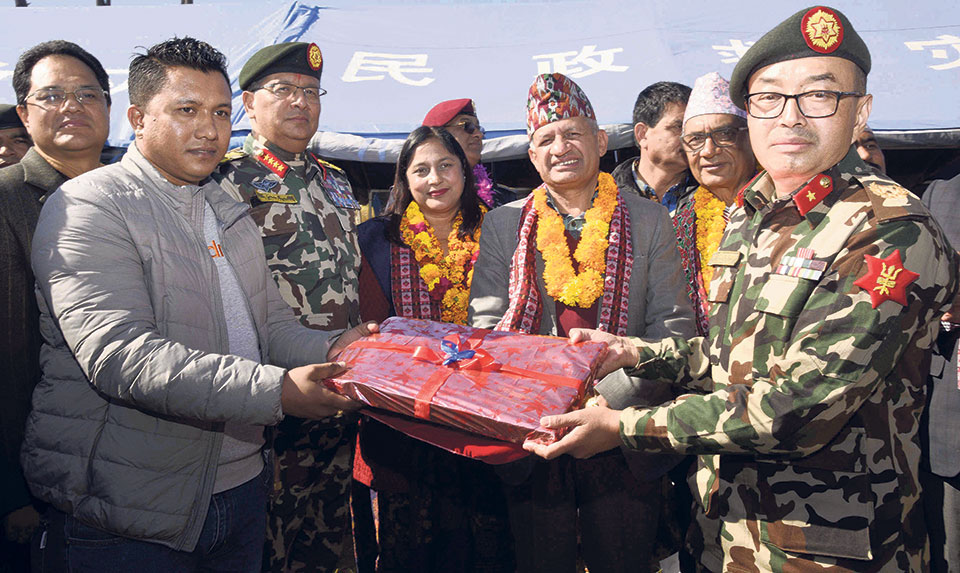 Foreign Minister Pradeep Kumar Gyawali, National Assembly member Dina Nath Sharma and Nepal Army chief Purna chnadra Thapa, among others, in a group photo taken on Tuesday during the handing over of a 30-km-long stretch of the Kaligandaki Corridor road being constructed by Nepal Army. Photo Courtesy Nepal Army

KATHMANDU, Dec 18: Nepal Army (NA) handed over a 30-kilometer section of the road of Kali Gandaki Corridor to the Road Division Office, Palpa, amidst a special function on Tuesday.

According to Public Relations Directorate of the NA, a 20-kilometer road stretch from Rudrabeni to Arbeni of Gulmi district and another 10-kilometer stretch of Maldhunga to Belewa Airport in Baglung was handed over the Road Division Office, Palpa, by Brigadier General (Technical) Ram Dhar Singh, who heads Engineering Department of Nepal Army.

Foreign Minister Pradeep Gyawali, member of House of Representatives Dina Nath Sharma, and Chief of Army Staff Purna Chandra Thapa, among others, were present in the handover function.

Addressing the handover ceremony, Foreign Minister Gyawali, who was elected as a member of House of Representatives from Gulmi, lauded the efforts made by the army even in adverse circumstances for the development of the country. “This Kali Gandaki Corridor is a testament to this fact. The fact that the Kali Gandaki Corridor is a project of strategic importance to connect Nepal with our friendly nation China, this is likely to chart the future of the country's economic prosperity,” he said .

Foreign Minister Gyawali also argued that Nepal should be able to reap benefits from the economic development that both India and China have been able to make in recent years.

Addressing the function, CoAS Thapa said that Nepal Army has been playing an important role in protecting Nepal's sovereignty, territorial integrity and independence and maintaining national unity. He also said that the army has also been providing disaster response and nation building works such as road construction as mandated by the government.

Thapa also assured that the army would continue playing its roles within the limit set by the constitution even in the future for the cause of the country and its people.

Lawmakers of Gandaki Provincial Assembly, Secretary at Ministry of Physical Infrastructures and Transport Debendra Karki, Director General of Department of Roads Keshab Sharma, army generals and officers, officials of other security agencies and local level government representatives as well as media persons were present on the occasion.

NA was given the responsibility of building these particular sections of the road of the Kaligandaki Corridor nearly seven years ago. The army had earlier handed over a seven-kilometer stretch of a road from Ridi to Rudrabeni last year.

Menstrual Cycle in Nepal: Curse to Celebration
14 hours ago