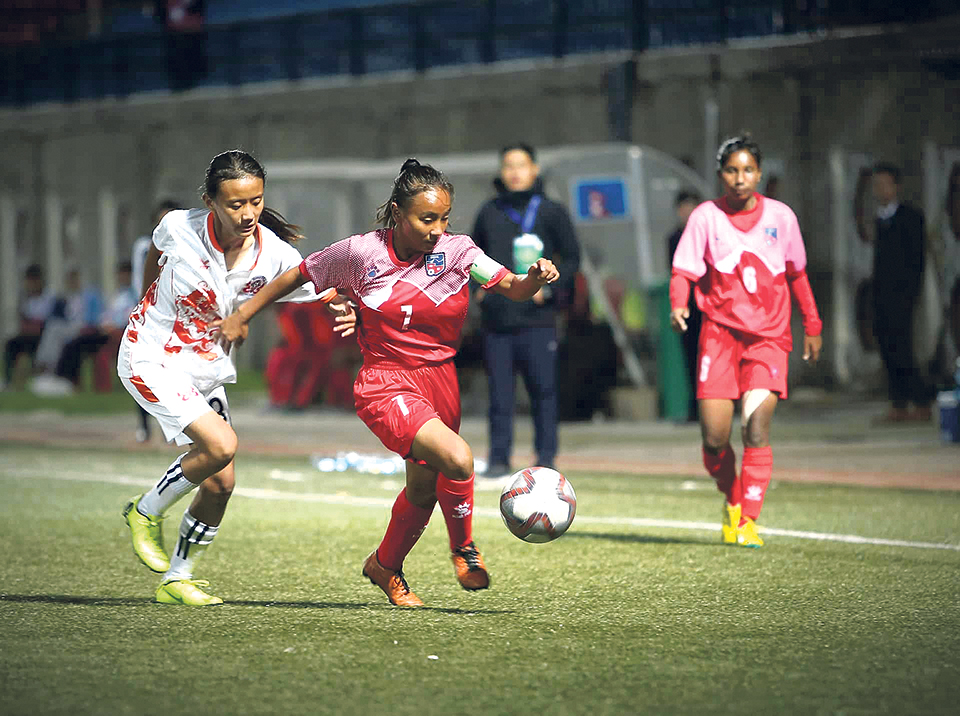 Nepal’s Preeti Rai in action during the SAFF U-15 Championship football match against Bhutan at the Chalimithang Stadium in Thimpu, Bhutan on Sunday. Photo Courtesy: NSJF

KATHMANDU, Oct 14: Nepali women failed to defend their lead as they were held to a 1-1 draw against a sluggish Bhutanese side in the SAFF U-15 Championship in Bhutan on Sunday.

Nepal had already been knocked out from the group stage following a 2-1 loss to Bangladesh on Friday. Earlier, Nepal had suffered a 4-1 defeat at the hands of India in its first group stage match.

Nepal was looking to end its SAFF campaign on a happy note despite its hopes of title battle dashed, but failed to convert chances in goal despite playing a competitive football in the first half at the Chalimithang Stadium in Thimpu.

Nepal took the lead in the 50th minute through substitute Nikita Thokar. Thokar‘s free kick from 30 yards out bounced into the penalty area. The Bhutanese goalkeeper came forward to catch the ball but could not judge the flight of it and the ball went in.

Head coach Rakesh Shrestha made three changes to the squad against the host. Regular starter Thokar was not included in the starting line-up but came as a substitute and put Nepal in front.

Bhutan opted for attacking tactics after conceding the goal and it paid off. Deki Lhazom squared the game in the 67th minute and the match was held to a 1-1 draw as both the teams failed to score after that.

Nepal and Bhutan both exited the tournament with a point each after losing the first two games against India and Bangladesh and now playing a draw.

Nepal became third with a superior goal difference to Bhutan.

Bhutan had lost to Bangladesh 2-0 and was humiliated by India 10-1.

Earlier on the day, India and Bangladesh played a 1-1 draw and finished on seven points each. India tops the group on superior goal difference. They will vie for the title on Tuesday.