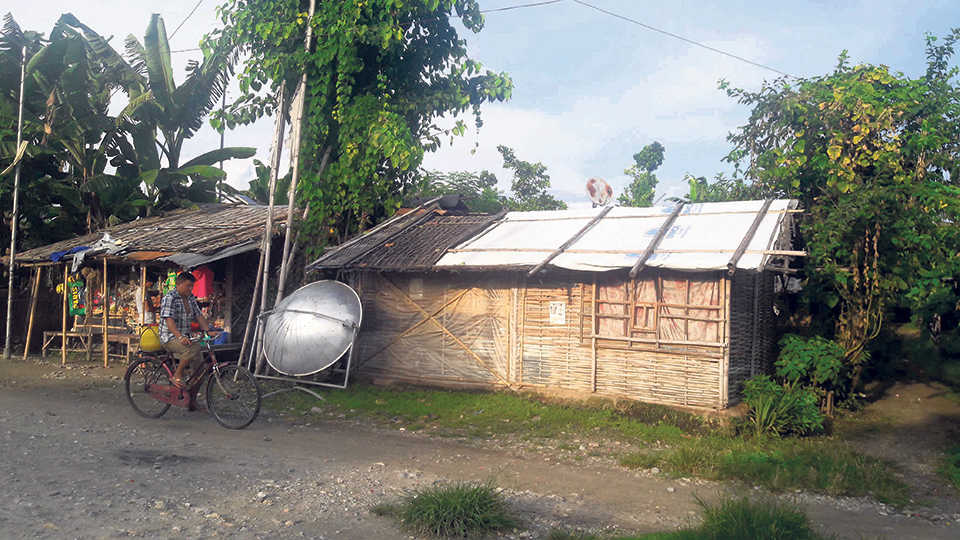 A man cycles past a refugee shed at the Bhutanese refugee camp in Damak Municipality-3, Beldangi in this recent picture. Photo: Yuvraj Bibas/Republica

DAMAK, September 11: Man Bahadur Khaling, who was in prison in Bhutan for 21 years, had just one dream when he came to Nepal in 2016 – meeting his family members and spending the rest of the time with them.

“I was able to come to Nepal in 2016, there was great excitement, but I could meet my youngest son only. Other in the family had already left for the USA under the third country settlement. “And the last one also left for the USA after one and half month of my arrival here,” lamented Khaling.

Even if he wants, he cannot go to a foreign land. He doesn’t have an identity card that recognizes him as a refugee. On November 15, 2017, the International Immigration Organization (IMO) brought the third-country resettlement process to an end for the refugees.

After being all alone in the camp, Khaling has joined a temple committee. Manghim Kirat Temple is his home nowadays. “Life feels empty, though I try to get busy,” he said. “I sometimes think of going back to Bhutan, but that’s not easy either.”

Khaling was in jail in Bhutan for promoting Nepali language, according to him. “They wanted to suppress our culture, language. I was active in protecting it, and they imprisoned me for it,” he recounted. “I thought life would be better once getting out of the prison, but my luck did not offer that,” he added.

Purna Bahadur Limbu, 87, has lived in the refugee camp for the last 27 years. His wife died three years ago. There is no one to take care of the man who is now very fragile, lean, and thin. “I have to do everything on my own. I remain bedridden sometimes. There’s no one to look after me,” he lamented.

He gets a disability allowance of Rs 1500, but that does not suffice for his personal expenses. He now regrets his decision to stay in Nepal instead of going to the USA when there was a chance.

“They had offered me the option to resettle. Everyone went. I thought I would not be able to adjust there,” he said. “But when I look at my life now, I feel so bad. I should have gone,” he added.

The camps in eastern Nepal look deserted. Most of the elderly refugees are living with the dream to return to Bhutan. But for many, that dream has faded too.

“When you are very weak and old, you are no more able to hold on to your dreams too. I am not sure whether I still dream of returning to my home in Bhutan,” said Limbu adding that he, however, would like to go if it comes easy.

Inside the camp, life is miserable not just due to the lack of young family members but also due to the absence of essentials needed for survival. When the refugees arrived in Nepal, many organizations had taken care of their needs.

But after the resettlement process, the camp was treated as almost no one’s responsibility. The refugees, who did not go to the third country raised voice for repatriation. Returning to their home in Bhutan was all they wanted.

They had demanded Nepal, India, and Bhutan to think about them more passionately and come up with a solution. “However that never happened,” said Limbu.

“Donors no more care about us. We are in deep trouble. Along with that, we are losing hope that we could ever return to Bhutan,” he stated.

Subba once had a big family of 80, his brothers and their families included. Now, he is all alone, just like many other elderlies in the refugee camp.

The refugees urged the Nepal government and the international community to look at their plight with humanitarian eyes and address their problems.

One killed, three injured in lightning strike
26 minutes ago