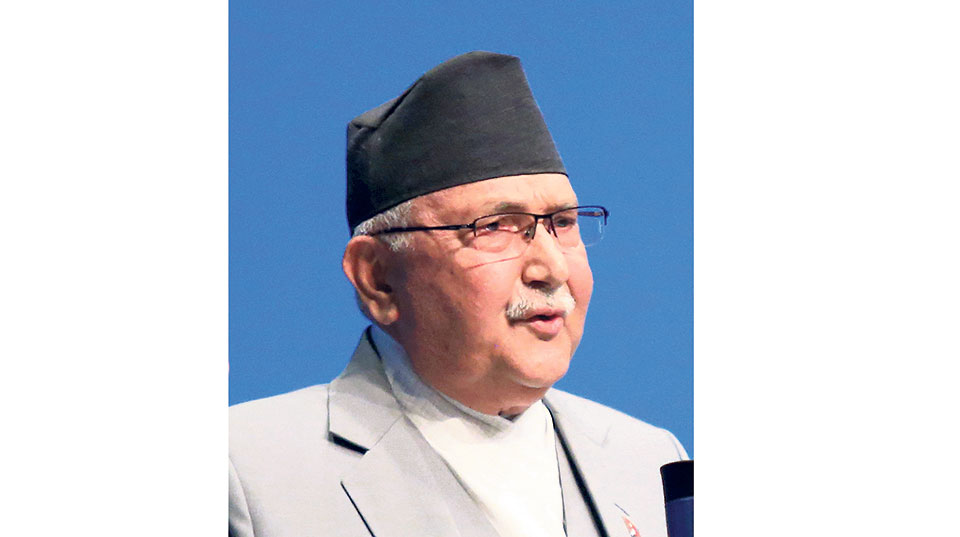 KATHMANDU, July 21: As Prime Minister KP Sharma Oli completes one and half years as head of government, he has little to show by way of progress in realizing the big promises he sold the people during the elections in 2017.

His promises include giving Nepal its own national flag carrier on the high seas, direct connectivity with the China’s railway network, and overall development of the country around the slogan “Prosperous Nepal, Happy Nepali”.

When lawmakers from the main opposition party Nepali Congress questioned the government’s performance last year, Oli vowed, among other things, to complete the much-delayed Melamchi drinking water project “within a matter of days”.

Around a month after the prime minister made a public announcement about washing all Kathmandu roads with Melamchi water, the Italian company, Cooperative Muratorie Cementisti de Ravena (CMC), washed its hands of the project, accusing Ministry of Water Supply officials of soliciting bribes.

Seven months after the Italians left the country, the government has done nothing to find substitutes for them and see the already much-delayed project through.

Informed sources said PM Oli has become quite helpless over Melamchi, which should have been given war-footing treatment. Water Supply Minister Bina Magar is the daughter-in-law of ruling party Co-chairman Pushpa Kamal Dahal and therefore cannot be touched despite her inability to deliver.

When he assumed office as prime minister for the second time, Oli was riding high with a near two-thirds majority in parliament. That made him one of the most powerful prime ministers Nepal has seen in decades. But after 18 months, which is more than the average longevity of a government in Nepal, Oli is clearly flailing.

Of late, even leaders from his own party have started publicly criticizing the government for its abysmal performance.

Not that Oli is not aware of all this. His fecklessness rankles and he is said to have made up his mind to reshuffle his team. But sources also said he is reluctant to act because of the possible backlash from key leaders within his party.

At the level of the general public, there is dismay over Oli’s government because he had made big promises such as piping cooking gas directly to people’s kitchens, and not kept the promise.

Last year, Prime Minister Oli, while addressing a public function, said people should be ready to book a ticket for an ocean voyage from  January. But now people sort of feel that they have only been taken for a ride. They have stopped taking him seriously.

There is no tangible progress over railway connectivity with Tibet. While Nepali officials have yet to come up with any concrete plans and proposals, the Chinese authorities in a bilateral meeting in Beijing a few weeks ago sought clarity on five specific points ahead of preparing any detailed project report.

Similar is the case with linking Nepal with India’s waterways and sailing Nepal’s own ships.

The prime minister has duly inaugurated a Nepal Shipping Office, but officials at the Water Resources and Energy Secretariat said that little has materialized in concrete terms. A top official at the secretariat said the third round of bilateral meeting has yet to take place. The second round was held in March.

At the March meeting, they agreed to form a joint team for a feasibility study on inland waterways connectivity through the Narayani and Gandak Rivers. The Indian authorities had agreed to provide three routes to  Nepal along with the connectivity facilities.

Nepali officials involved in the negotiations say they had proposed to be allowed to operate Nepal-registered ships along the Ganges where the Indians are developing it as a waterway. The Indian authorities had assured them of responding to the proposal only after reviewing their own domestic laws. They have not responded so far.

Apart from these big projects, Oli also promised to make Kathmandu free of atmospheric dust and turn it into a mask-free city.

Political observers blame a dearth of “workable plans”  for the failure of Oli’s ideas and promises to get off the ground.

“Politicians often come up with visions but it’s up their teams to flesh out those visions and make them work in practice,” said political analyst Krishna Pokharel. “PM Oli lacks such a team and lacks the knack of getting the bureaucrats cracking.”

Nepse loses 23.85 points on Monday as investors rushed to book profits
9 hours ago