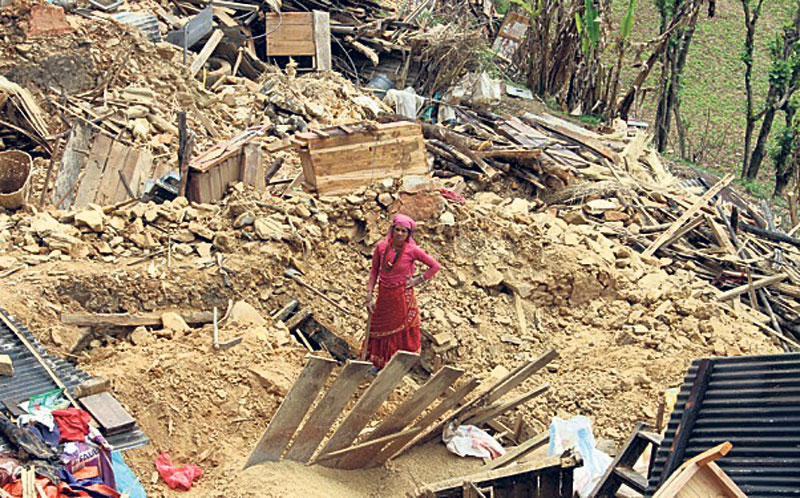 A woman in the rubble of her home that was destroyed by the earthquake on April 26, last year in this file photo.

SINDHUPALCHOWK, Oct 6: Shovaram BK lost his house to the great earthquake last year. He cleared the remains of the fully destroyed house and was thinking to build new house when a landslide washed away the land, too. Before his eyes, he lost his house and land. BK's family then shifted to a safer place nearby and started constructing another house. No sooner the house came into shape, a local landlord came and destroyed it. BK had erected the house in Guthi's land.

“He stormed in our house. He did not listen to our plea. Our house was destroyed before our eyes,” BK lamented adding that he had taken loan to build the house.

BK's family has been cultivating the Guthi's land and since he was not legally its rightful owner, he could not protest when the house was brought down.  Helpless, he and his family members simply witnessed the destruction of their house, not by natural forces but by the members of their own society.

“Though I have been cultivating in these lands since my grandfather's time, I am not its legal owner, which would enable me to claim right for building house on it. Without land ownership papers we are like squatters,” BK spoke in faint voice. “What wrong would it be if we took shelter in Guthi's land, but the rich people could not tolerate. Poor people like us are really powerless,” he added.

Hari Bhandari, a resident of Keul village has a similar story to narrate. After losing his house to the earthquake and his land to landslide, Bhandari also became homeless.

“Those were tragedies, back to back. When I had lost my house, I hoped to make another home in the same land. But when the landslides washed off the land too, there was no hope left for my family,” he said. Like BK, he is also landless. Even his earlier home was constructed in Guthi's land.

Both Bhandari and BK's families have been living in makeshift tents. But they know that that it is not a permanent solution to their problem. In lack of land ownership paper, the likes of BK and Bhandari are not able to claim even government provided grants and benefits.

In lack of property papers such earthquake victims have not been able to claim government grants for constructing new house.

Bhandari opined that the government should have been more sympathetic towards landless people and should have enlisted them as victims on the basis of other documents and methods. “This is injustice towards the poor and landless people. Rich people have links with the powerful people and even if they don't have proper papers they get government aids as they prepare all the required papers using their contacts and wealth. Poor people like us are always left behind as the government is least concerned about our plight.”

Dozens of families like Bhandari's are left in the lurch. While others queue to claim grants provided by the government they are sidelined in lack of necessary documents. They state that until and unless the government provides them land, they won't be able to manage shelter for themselves in any condition. Even if they get the house construction grant, they feel that they won't be able to buy land and build a house with it.

Chandra Kumari Thapamagar did not have land ownership paper either. However, she was entitled to get first installment of house grant of Rs 50,000 after her neighbor agreed to provide land required for building house. “I got the money. But now I am in dilemma what to do with it,” said Thapamagar. “If my neighbor provides land as agreed, everything would be fine. But if they deny, where will I build a house for my family?” she asked.

Many of the landless earthquake victims have produced land ownership paper to the authorities through such agreements with their neighbors. The land ownership paper has enabled them to receive Rs 50,000, the first installment of the total grant of Rs 300,000 the government has decided to provide to earthquake victims. But, these victims doubt that their neighbors would really be kind enough to let them build house in their land as agreed. “They don't have to transfer land ownership to us. We would be glad if they would provide their land for us to build house and live in it. If they decline to keep their promise, I don't know what my family will do” Thapamagar said expressing doubts deep inside her of ultimately remaining homeless.

First of the installment is still being distributed in many VDCs of the district. Reports state that some of the victims have been using it for 'Dashain shopping' instead of saving it for building shelter for their family. Thapamagar said she has kept her money safe but the uncertainty about the land for building house has been making her anxious.

Sindhupalchowk landless earthquake victims in a protest rally demanding right to land they cultivate in this file photo.

Bhumi Adhikar Manch, which speaks for the landless people of Sindhupalchowk has been raising voice for the rights of landless people. Suresh Nepal, one of the youth leaders of the Manch stated that some of the land owners in the villages have been exploiting the poor since ages and are still depriving them of their rights. “Most of the people who are considered landless today have been living here since their ancestral time and working in those fields. It is only that they do not have the ownership papers of those lands. But today, you can see how they are being treated by the government” he fumed. He added that the poor and innocent people must get their rights.

Hirraj Shrestha, another landless earthquake victim, added that not enlisting landless people for grants and other benefits post earthquake is making them doubly victimized. “We have been victimized since ages. We have been denied rights to land that our families have cultivated since ages. And now also the government is doing injustice to us by depriving us of earthquake assistance just because we are landless,” he said further asking, “Is this how a government treats the poor?” Nepal said that there are 354 landless earthquake families in the district.