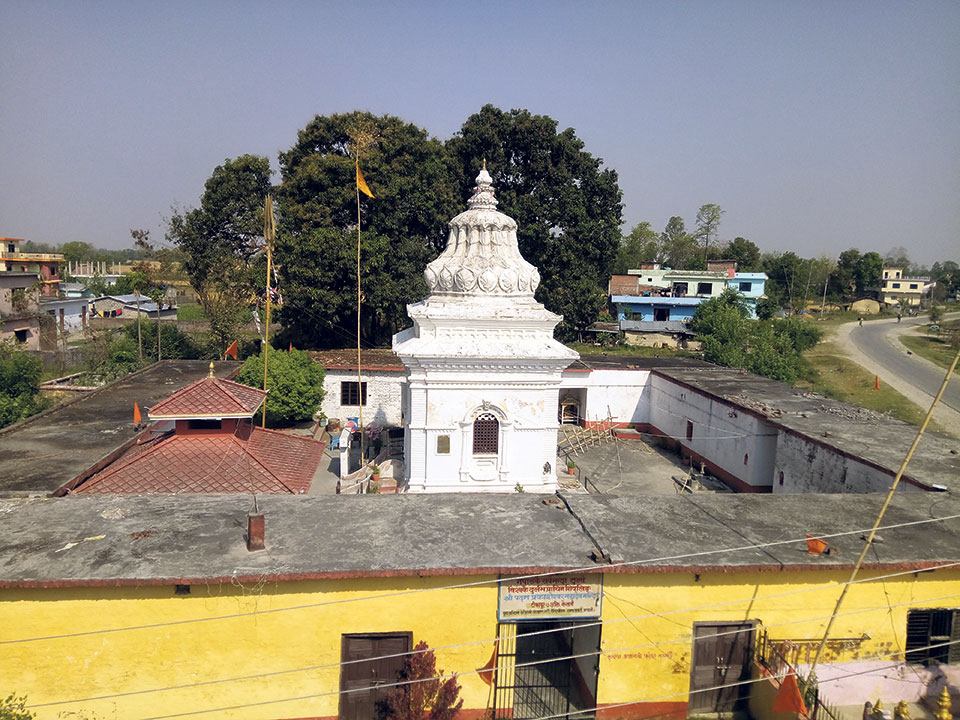 TIKAPUR, Nov 7: Historical evidences say that a Shivalaya Temple at Tikapur Municipality had 700 bigha of land in the past. However, now it occupies no more than a mere eight kattha land. According to Bidur Kayastha, chairperson of the Shivalaya Temple Protection Committee, there are some documents which prove that the temple earlier had 700 bigha of land. But over the years, it lost the land," he said. "Now, there is no more than eight kattha and 14 dhur of land in its name," he added.

Actually, the land area had shrunk to just two kattha. Only after a local Hari Om Prasad Shrestha recently donated six kattha of land, and another donor Hari Kumar gave away four dhur of land, the temple is in its present form. The Shivalaya, or the temple of Lord Shiva, is officially known as Prakasheshwar Mahadev Temple and draws huge crowd during festivals.

"There is a need of a serious investigation on where the land went, how was it occupied," said Kayastha. "A powerful committee needs to be formed to reclaim the temple's land," he added.

He said that a book called 'Prachin Nepal' (Ancient Nepal) published by the Department of Archeology mentions that the temple had 700 bigha of land.

"The book clearly states that the temple area even stretched to Tinkuniya, Belraya, Sighai areas of India," said Kayastha.

The same account is recorded in another book named Seti, published by Purna Publication, Nepal. "This book mentions that 12 villages belong to the Shivalaya. So, we need to research about this issue," Kayastha stated.

Former Narayanpur VDC Chairperson Fakirsingh Kadayat meanwhile stated that the locals are not unaware about the huge land of the temple. "I also heard a lot about it since my childhood. But over the time, things changed, transaction of land began and went on," he said. "I tried to get deeper into this issue when I was the chairperson of the VDC. But I could not do much as the evidences are found only in old documents," he added.

There are still some public lands around the temple. It is believed that the lands are the lost property of the temple. However, there are no proper documents with the temple to claim those land.

A local Gyanu Shrestha stated that those who took charge of the temple protection committee actually sold off the land. "The temple has lost its land because those who were responsible to protect the property were involved in selling it," she charged. "Even till last year, they were transferring the land to individual's name," she added.

It is believed that the temple is 50,000 years old and is associated with the Treta Yug, the time of Lord Ram.

KATHMANDU, June 2: A bill tabled in the National Assembly (NA) by the government to manage land belonging to Guthis (religious/social... Read More...

ITAHARI, May 11: A decision taken by the government has increased the risk of encroachment of forest land in Sunsari. Read More...