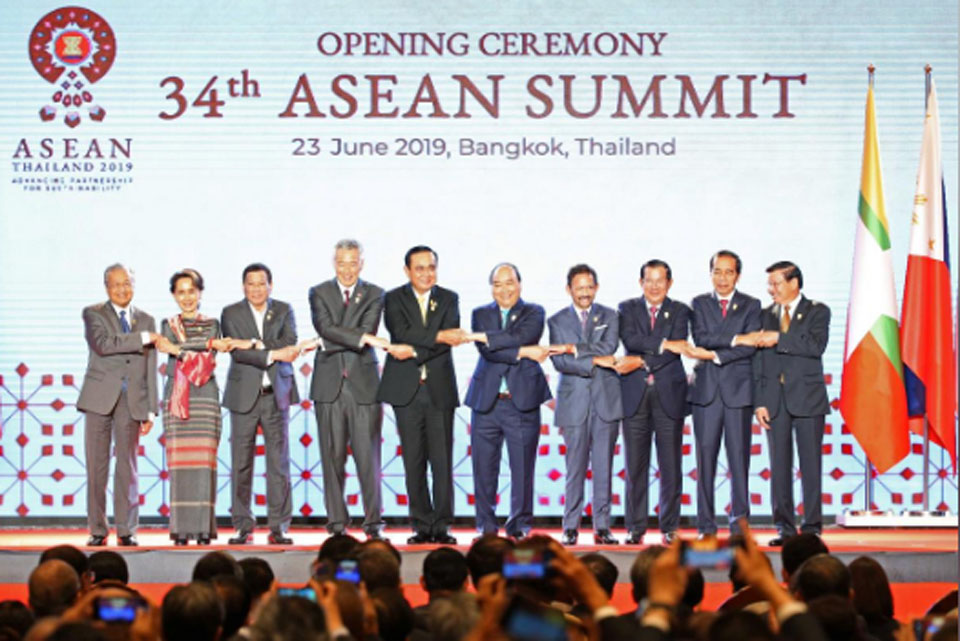 BANGKOK, June 23: Southeast Asian leaders met on Sunday for a second day of a summit in Bangkok, where they were expected to discuss pressing regional issues including the plight of Myanmar’s fleeing Rohingyas and the South China Sea dispute.

Leaders of the 10 countries on Saturday adopted a joint declaration against marine plastic pollution and stressed the importance of a regional trade pact first proposed by China.

More than 700,000 Rohingya crossed into Bangladesh in 2017, according to U.N. agencies, after a crackdown by Myanmar’s military sparked by Rohingya insurgent attacks on security forces.

Malaysia’s foreign minister Saifuddin Abdullah on Saturday called for perpetrators of massacres and atrocities against the Rohingya to be “brought to justice,” according to a tweet issued by his ministry.

“The repatriation process must include the citizenship of the Rohingyas,” Saifuddin said.

“The Rohingya issue is a major test for the capability of ASEAN to make good on its words about being “One Caring and Sharing Community,” said Marty Natalegawa, a former Indonesian foreign minister, recalling a 2007 declaration the group made in Cebu, the Philippines.

“Developments in Myanmar ... is providing a litmus test for ASEAN’s capacity to manage developments in one of its member states that have wider ramifications for the region and, indeed, beyond,” Natalegawa told Reuters.

Formed more than 50 years ago, the Association of Southeast Asian Nations (ASEAN) has historically struggled with challenges facing the region because it works only by consensus and is reluctant to become involved in any matter regarded as internal to a member state.

“I invite all of you in this room ... to join hands and drive forward to establish a foundation for the ASEAN community - a people-centered one that leaves no one behind,” said Thai Prime Minister Prayuth Chan-ocha in his opening remarks.

Prayuth, who as army chief seized power in 2014, was making his ASEAN debut as a civilian leader, after a general election in March that opposition parties say was designed to ensure victory for his pro-military party.

The countries made some progress on a Code of Conduct negotiating draft for the disputed South China Sea and likely will finish a first reading by the end of this year, said Busadee Santipitaks, Thailand’s foreign ministry spokeswoman.

The final reading is expected by the end of 2021, she added.

The South China Sea is one of the world’s busiest waterways, and a potential flashpoint in the region as several ASEAN members - the Philippines, Vietnam, Malaysia, Brunei and Indonesia - as well as China and Taiwan have conflicting territorial claims.

Experts have cast doubts over what progress the 10-country group could make on the matter.

“We are hoping that the code of conduct being negotiated will be binding,” Kantathi Suphamongkhon, a former Thai foreign minister told Reuters. “If it is not then we will be back at the beginning again.”

WASHINGTON, May 20: The U.S. military said one of its warships sailed near the disputed Scarborough Shoal claimed by China... Read More...

CAMBRIDGE – Chinese President Xi Jinping seems to be on a roll. He has sent a rocket to the dark... Read More...

TOKYO, Sept 17: A Japanese submarine joined a naval drill in the South China Sea for the first time, the Ministry... Read More...

EXPLAINER: What’s known about ‘stealth’ version of omicron?
5 hours ago

Home Minister for safe handling of international airport
4 hours ago

Rapist sent to 18 years in prison
4 hours ago

Home Minister for safe handling of international airport
4 hours ago

National Assembly Election: Voting starts at 9 AM
4 hours ago