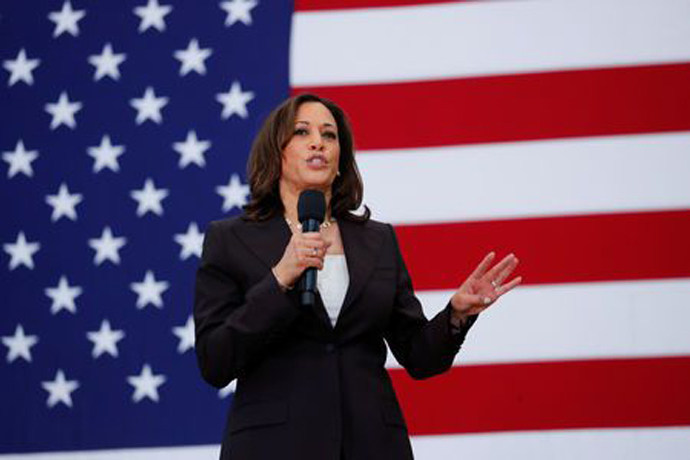 The U.S. senator from California said if elected president she will force states with a history of hostility toward Roe v. Wade - the landmark 1973 Supreme Court decision that established a woman’s right to an abortion - to first obtain approval from the Justice Department before a law restricting abortion could take effect.

“Here’s the thing, there are states that keep passing these laws,” Harris said at a Tuesday night town hall hosted by MSNBC in Spartanburg, South Carolina.

“So, when elected, I’m going to put in place and require that states that have a history of passing legislation that is designed to prevent or limit a woman’s access to reproductive health care, those laws have to come before my Department of Justice for a review,” she added.

South Carolina is one of the early states in the presidential candidate nomination competition starting early next year and the first to have a sizeable population of black voters. A good performance in South Carolina is central to Harris’ primary strategy.

Harris’ proposal comes amid an intensifying national debate on abortion rights, as roughly two dozen Democrats seek to become the candidate to take on Republican President Donald Trump in next year’s election.

Alabama this month approved one of the strictest abortion laws in the United States. It would make abortion illegal in nearly all cases, including those of rape and incest.

Several other Republican-controlled states, including Georgia and Ohio, have recently passed so-called “heartbeat” laws, which outlaw abortion if a doctor is able to detect a fetal heartbeat, which can occur as early as six weeks into a pregnancy.

“I think it’s very clear that – and it has not changed – that women’s ability to have access to reproductive health is under attack in America,” Harris said at the town hall.

The U.S. Supreme Court on Tuesday refused to consider reinstating Indiana’s ban on abortions performed because of fetal disability, or the sex or race of the fetus, while upholding a requirement that fetal remains be buried or cremated after the procedure is done.

Both provisions were part of a Republican-backed 2016 law signed by Vice President Mike Pence.

Harris’ plan to protect abortion access comes after those offered by other Democratic candidates, including U.S. Senator Cory Booker of New Jersey, and Beto O’Rourke, a former Texas congressman.

Under Harris’ plan, a state with a history of violating the Roe decision will have to prove that any new law or practice does not end or curtail a woman’s right to choose an abortion.

The Harris plan is modeled on former preclearance provisions under the 1965 Voting Rights Act, which were in place to protect voters from laws deemed hostile to a citizen’s ability to cast a ballot.

The Supreme Court in 2013 said the map used for civil rights preclearance was outdated and needed to be updated before preclearance could resume.

WASHINGTON, Aug 20: Kamala Harris has made history night as the first Black woman to accept a spot on a... Read More...