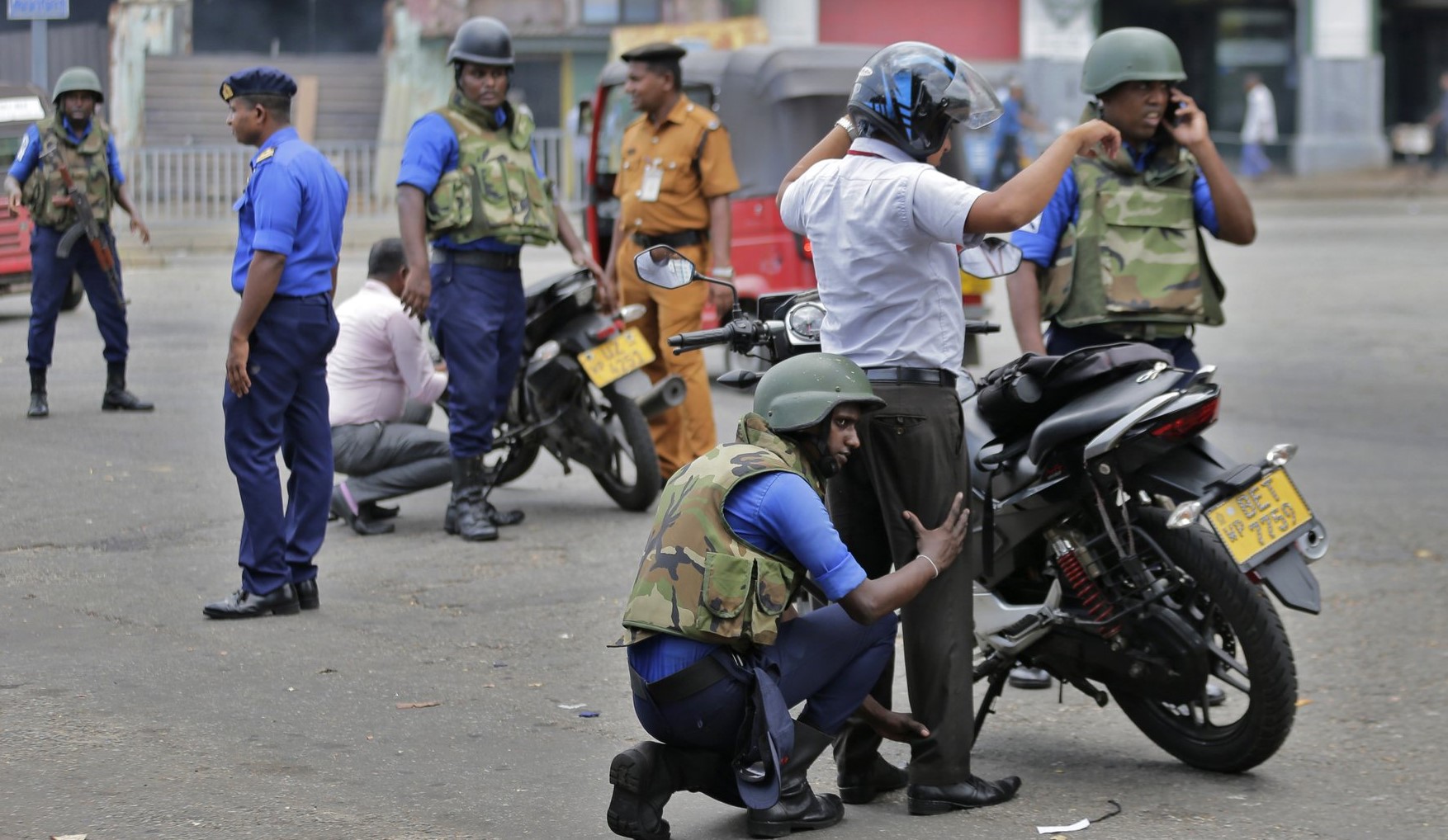 COLOMBO, April 25: The father of two of the suspected Easter suicide bombers was arrested on suspicion of aiding his sons on Thursday, according to Sri Lanka’s former navy chief, as investigators continued to comb his Colombo mansion for evidence of the attacks that killed 359 people.

Jayanath Colombage, now a counterterrorism expert at the Pathfinder Foundation, confirmed the arrest to The Associated Press. He said it was unclear whether the father or his home, where an explosion Sunday killed three police officers, had been under surveillance ahead of the attacks.

Sri Lankan police spokesman Ruwan Gunasekera did not answer repeated calls and messages seeking comment, but earlier said 58 people had been detained since the bombings.

The mansion was the site of a ninth explosion Sunday, which one of the suspects apparently detonated to ward off police.

Sri Lanka’s capital remained jittery Thursday as authorities set off more controlled detonations of suspicious items, soldiers stopped and searched vehicles and some businesses advised staff to stay indoors, four days after the string of suicide bombings in and around Colombo that officials say were conducted by local Muslim extremists.

John Keells Holdings, the parent company of the Cinnamon Grand hotel, one of the sites stricken in the Easter Sunday bombings, told employees at its various hotel properties to stay inside “further to the communications we have received” in an email shared with the AP.

It was not immediately clear where the warning originated, and a police spokesman did not respond to several calls and messages.

The streets around Dematagoda, a wealthy Colombo neighborhood where officials say many of the bombing suspects lived, were quiet Thursday.

Investigators continued to comb through the mansion of the father of two of the suspects with nine front balconies and a white BMW parked out front.

In a house on the other side of a quiet, leafy lane full of large houses, a 14-year-old boy said he used to ride bicycles and play soccer with one of the suspect’s children, a 10-year-old boy who frequently visited his relatives there, and that the other children at the house were too young to play outside. He said his entire house shook when the bomb went off.

Sri Lankan police continued their search for additional explosives in and outside of Colombo, detonating a suspicious item in a garbage dump in Pugoda, about 35 kilometers (22 miles) east of the capital.

Sri Lanka’s civil aviation authority also banned drones and unmanned aircraft “in view of the existing security situation in the country,” according to a statement.

Hobby drones have been used by militants in the past to carry explosives. Iraqi forces found them difficult to shoot down while driving out the Islamic State group, whose members loaded drones with grenades or simple explosives to target government forces. And Yemen’s Houthi rebels have used drones, most recently to target a military parade in January, killing troops.

The attacks Easter Sunday mainly at churches and hotels killed at least 359 people and wounded 500 more, the government said Wednesday. Most were Sri Lankan but the Foreign Ministry has confirmed 36 foreigners died. The remains of 13 have been repatriated. Fourteen foreigners are unaccounted for, and 12 were still being treated for injuries in Colombo hospitals.

A top Sri Lankan official has said that many of the suicide bombers were highly educated and came from well-off families.

Junior Defense Minister Ruwan Wijewardene said at least one had a law degree and others may have studied in the U.K. and Australia.

Australian Prime Minister Scott Morrison said one of the bombers had been in the country on a student visa with a spouse and child before leaving in 2013.

A British security official also confirmed one bomber is believed to have studied in the U.K. between 2006 and 2007. The security official, who spoke on condition of anonymity because of the sensitive nature of the investigation, said British intelligence was not watching Abdul Lathief Jameel Mohamed during his stay in the country. His name was first reported by Sky News.

Sri Lankan government leaders have acknowledged that some intelligence units were aware of possible terror attacks against churches or other targets weeks before the bombings. The president asked for the resignations of the defense secretary and national police chief without saying who would replace them.

Sri Lankan authorities have blamed a local extremist group, National Towheed Jamaat, whose leader, alternately named Mohammed Zahran or Zahran Hashmi, became known to Muslim leaders three years ago for his incendiary online speeches. On Wednesday, Wijewardene, the junior defense minister, said the attackers had broken away from National Towheed Jamaat and another group, which he identified only as “JMI.”

The Islamic State group has claimed responsibility for the attacks. Authorities remain unsure of the group’s involvement, though they are investigating whether foreign militants advised, funded or guided the local bombers.