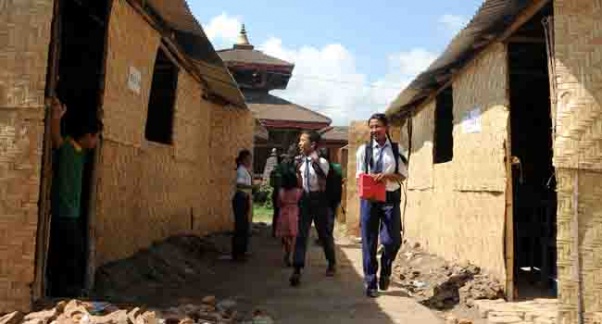 Kathmandu, April 23: The reconstruction of 4,476 schools that were damaged by the April 25, 2015 Gorkha Earthquake and its subsequent aftershocks has been completed so far.

He said a total 6,646 schools, including 398 additional schools that would be selected, are being reconstructed. Seven thousand nine hundred and twenty-three schools were damaged due to the disaster in the 32 districts affected the most by the earthquake. Twenty-one thousand one hundred sixty nine classrooms at these schools were completely damaged.

The Asian Development Bnak (ADB), Japan International Cooperation Agency (JICA), China, India and other countries have been providing assistance for the reconstruction of schools. Shrestha said the reconstruction of all the earthquake-damaged schools would be completed by the end of the current fiscal year 2018/2019 and an estimated Rs 90 billion will be required for this.

Among the problems in school reconstruction, Shrestha maintained the paucity of budget in which the Government of Nepal is the source and the difficulty in acquiring land for schools for constructing additional structures. RSS

Kathmandu, March 12: Four thousand one hundred and ninety school structures out of the total schools that were damaged by the... Read More...

Reconstruction has contributed to building, a prosperous and strong Nepal: NRA Chief Gyewali

The National Reconstruction Authority (NRA) is marking its fourth anniversary tomorrow. It is said the Authority set up after the... Read More...

KATHMANDU, March 28: Contractors have completed only 12 percent of the reconstruction work assigned to them at schools affected by... Read More...

In Pictures: Students take to the streets demanding justice for Sadiksha Chaudhary
26 minutes ago