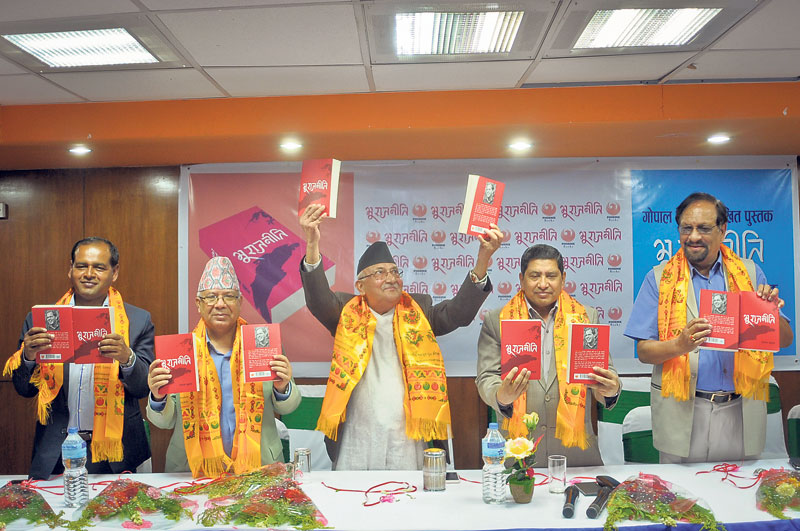 KATHMANDU, Sept 25: Former Prime Minister and Chairman of CPN-UML KP Sharma Oli has criticized the government for "attempting to undermine" the agreements reached between Nepal and China during his tenure.

He claimed that his government had taken concrete steps to diversify Nepal's trade so as to create a balanced foreign policy with foreign countries but "those initiatives are now being undermined" by the present government.

"But these days it seems a cloud has been hanging over the future of those initiatives," Oli said at a launch of book Bhurajniti [Geopolitics] authored by Journalist Gopal Khanal. "At such a critical time, a major ruling party Nepali Congress seems to be in a deep slumber. It is silent as if nothing is happening in the country."

Hinting at NC leader Ram Sharan Mahat who was sharing the podium with him, Oli asked what is the NC's stance on critical policies such as foreign affairs.

He asserted that his government's decisions were taken only after thorough study and proper analysis. "It was neither guided by feudal nationalism nor was unbalanced as it was projected by some quarters," he said.

Oli lambasted Minister for Information and Communications Surendra Karki, who is also the government spokesperson, for claiming that building roads and other development projects would cause environmental loss in the northern part of the country.

"The Indian field office has remained there for years waving a foreign flag and guarded by foreign army and no successive government listened to the call for removing it from there," said Shrestha.

He said that he took several initiatives as foreign minister to remove the field office and repeatedly asked his party chairman Pushpa Kamal Dahal, who is now prime minister, and other prime ministers for that but to no avail.

KATHMANDU, May 26: As the government marked its first 100 days on Friday, Prime Minister KP Oli has earned praise for... Read More...

Govt to provide up to Rs 1.5 million each to workers abroad in legal aid
7 minutes ago