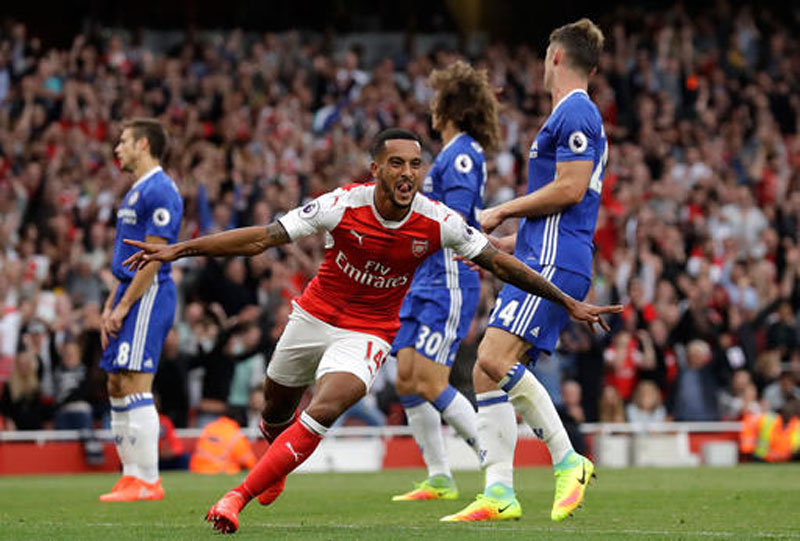 Arsenal's Theo Walcott celebrates after scoring his side's second goal during the English Premier League football match between Arsenal and Chelsea at the Emirates Stadium on Saturday.

LONDON, Sept 25: For once, a landmark game for Arsene Wenger wasn't spoiled by Chelsea, and this time it was Arsenal humiliating its London rival.

Wenger's 500th and 1,000th games in charge of Arsenal both ended in losses to Chelsea but his fortunes finally changed on the 20th anniversary of his appointment.

Arsenal turned on the style with a 3-0 victory in the Premier League on Saturday that exposed Chelsea's defensive frailties and showcased the north London side's attacking prowess.

Alexis Sanchez, Theo Walcott and Mesut Ozil provided the goals in the first half that gave Arsenal its first league win over Chelsea in five years. Chelsea hadn't even allowed a league goal to Arsenal since January 2013 before this capitulation.

"It's one of the best performances in recent years," Wenger said of his 1,128th Arsenal game. "We have had to deal with some inconvenient facts ... we couldn't beat Chelsea for years. To get that out of the system was at stake today."

But the result will matter little to Wenger, the league's longest-serving manager, unless Arsenal has the trophy in its possession again when the season ends in eight months.

"I'm hungrier (to deliver trophies) because I know I don't have 20 years in front of me," Wenger said. "The weight of keeping people happy and making people happier is heavier than when I arrived."

The 66-year-old Wenger has survived in the Arsenal dugout despite last winning the league in 2004, and lifting only the FA Cup twice in the intervening years.

No Chelsea manager would enjoy the same job security without providing a regular flow of silverware.

Antonio Conte will already be feeling the pressure after two months as he seeks to restore Chelsea to the top four.

After opening the league campaign with three successive wins, Chelsea has collected only one point from the last three, and is already eight points behind leader Manchester City. Arsenal is five points off the pace.

"We must work a lot to improve the situation, because now we are a great team only on paper, not on the pitch," Conte said.

The former Juventus and Italy coach is the 12th Chelsea manager Wenger has faced since he was plucked from near-obscurity in Japan by Arsenal in September 1996.

Conte arrived at Chelsea in the offseason with a typically-Italian reputation for sending out well-drilled, solid defenses. But the Blues have conceded nine in their last four games in all competitions.

Just one clean sheet in eight games has underscored the underlying weaknesses in a defense shorn of injured veteran center back John Terry.

Chelsea looked rattled from kickoff against an electrifying Arsenal side.

Gary Cahill's dithering didn't help. The Chelsea center back conceded possession in the 11th minute around the halfway line to Sanchez, who was able to run through on goal unchallenged before chipping goalkeeper Thibaut Courtois.

Within three minutes, the Gunners had another.

Once again, Chelsea's defense was ripped apart with ease with a slick passing move the visitors could find no way of disrupting.

It ended with Hector Bellerin receiving the ball on the right flank from Alex Iwobi before crossing to the unmarked Walcott, who tapped into the net.

The only surprise was Chelsea's rearguard lasted until the 40th without crumbling again. The counterattack started deep inside Arsenal's own half when N'Golo Kante lost possession.

Ozil faced no resistance as he charged down the pitch before sending the ball to Sanchez on the right flank. With the central defensive duo of Cahill and David Luiz posing little resistance, Sanchez crossed the ball back to Ozil, whose first-time volley bounced beyond Courtois.

"The first half was nearly perfect," Wenger said. "We played with style, with pace, with movement."

Chelsea was humiliated, and couldn't even manage a shot on target until the 84th from Michy Batshuayi.

"It was one of these moments in your life as a manager when you think 'OK, today is a great day,'" Wenger said.

Chelsea take over at the top by beating Middlesbrough

MIDDLESBROUGH, Nov 21: Chelsea moved to the top of the English Premier League on Sunday after a first-half strike by Diego... Read More...