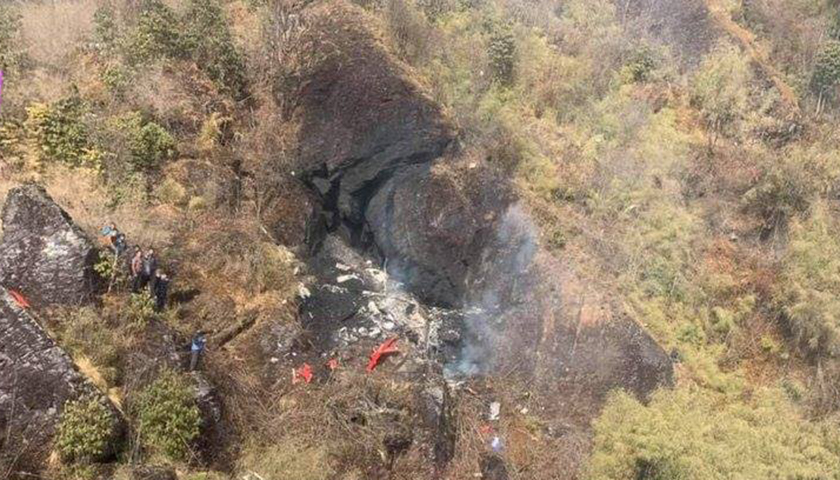 KATHMANDU, Mar 1: Wednesday's deadly helicopter crash at Sisnebhir, Taplejung in which seven people including Minister for Culture, Civil Aviation and Tourism Minister Rabindra Adhikari were killed has pointed to serious lapses in air safety and security, bringing to the fore the urgency to include environmental hazards in safety assessment.

The exact details surrounding the crash remain unclear but officials suspect that bad weather was the main reason behind the crash. The area had witnessed heavy snowfall and the surrounding hills were covered in thick cloud. Video footage of the helicopter taken just ahead of the crash show that it had lost balance and crashed into a cliff after the rotor abruptly stopped working.

This raises questions as to whether the pilot had been too lenient in assessing the risks. Rajendra Bahadur Chhetri, TIA general manager, said aviation safety standards require pilots to take precautions in case of adverse weather.“In many cases like this one, pilots have to use their discretion,” said Chhetri.

Or, could it be that the captain had to yield to pressure from passengers who wanted to return to Kathmandu no matter what. “It's raining….the weather is really bad and we have to return,” the late Adhikari said in a speech delivered to locals before the flight. He was due to leave for Germany on Thursday. Many are asking what made pilot Pravakar KC change his mind after initially reporting to the air controller at Suketar: “Heavy snowfall can't be airborne”.“It appears he was forced to fly under pressure.

Otherwise, why would he change his mind a few minutes after declining to take off?” said a police official. Before boarding, KC had also inquired with the locals about the weather condition in the lower belt and he might have been misled by their information, the official added. A few others suspect overloading as one possible reason behind the crash and question why seven people were on board an aircraft meant for carrying just five people.“Pilots usually refuse to take more than five passengers on board on VIP flights, and additional passengers are required to stay in the queue at Suketar or Taplejung Bazaar. Why were seven people allowed on board despite knowing that the weather was bad?” questioned UML leader Yogesh Bhattari, a member of parliament from the district.

Aviation officials, however, say that the helicopter was capable of carrying a greater load and the passengers issue was overblown. The crash has made it pressing to incorporate aspects of air safety in VIP security protocols. Adhikari was the second minister to die in an air crash in Taplejung in the last 12 years. Former home secretary Govinda Kusum said that the home ministry was yet to include air safety in its security protocols.“The issue of air safety comes under the domain of ICAO, which has its own safety standards. That's why we haven't included air safety,” said Kusum.

Details of forest areas to be submitted in parliamentary committee

KATHMANDU, Aug 25: The meeting of the Agriculture, Cooperative and Natural Resources Committee under the House of Representatives (HoR) has... Read More...