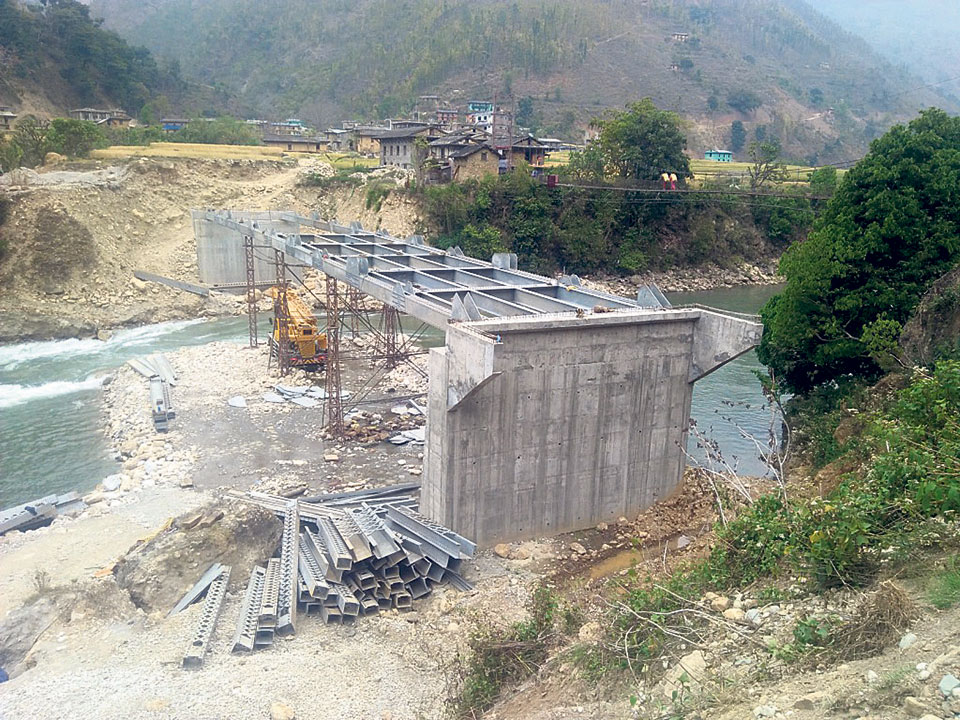 RUKUM, April 25: Construction of a bridge linking Simli with Garayala in Sani Bheri Rural Municipality of Western Rukum began six years ago. It was supposed to be completed within two years. But six years down the lane, the project is nowhere close to completion.

The project, however, is gaining momentum now after BQ Builders of Kathmandu, which had bagged the contract, handed over the responsibility to a local contractor. The new contraction has expedited works. BQ Builders had managed to erect only two pillars.

The bridge is being built with the assistance of Division Road Office, Surkhet. Locals are happy with the way construction activities have picked up. The contractor has already laid the lower truss and is working to install the upper truss.

Once the bridge is ready, locals will have easy access to Surkhet – the capital of Province 6 – and further to Nepalgunj – the commercial hub of the region. At present, locals have to travel approximately 340 kilometers through Salyan, Dang and Kohalpur to reach Surkhet. It will be reduced to 168 km once the bridge construction is completed.

Even though the truss work is going on in full swing, there is still lot more to do for vehicular movement to be possible. Kedar Bista, chairman of Ward 3 of Sanhibheri Rural Municipality, said that the local unit was knocking the doors of the authorities concerned for early completion of the bridge.

Narendra Bhatta, chief of Division Road Division Office Chaurajahari said that the new contractor has assured them that the bridge will be read within the current fiscal year which ends in mid-July.

Representatives of the contractor, however, said that the project got delayed due to change in location. "The initially selected location was deemed inappropriate due to risk of landslides and floods according to the technical report. It took time to prepare another design in the new location," they added.

The Division Road Office has provided Rs 78.2 million for the project. The construction deadline has already been extended twice. Meanwhile, the contractor has sought one more deadline extension.

Khairenighat gets a motorable bridge after 11 years

EAST RUKUM, Dec 2: A packet of salt costs nine rupees. However, residents of East Rukum, one of the youngest... Read More...