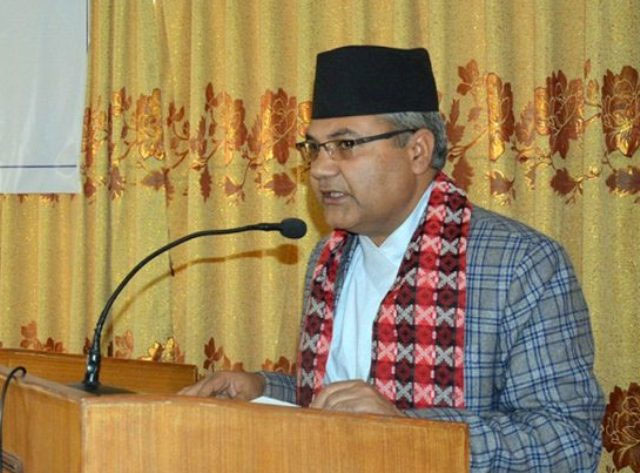 BHAKTAPUR, Jan 19 : Minister for Communications and Information Technology Gokul Prasad Banskota has reiterated his commitment to enforce minimum wages for working journalists by all means.

Inaugurating the 21st annual general meeting (AGM) of the Federation of Nepali Journalists (FNJ), Bhaktapur chapter here on Saturday, Minister Banskota said the provisions related to minimum wage would be implemented without any compromise.

The Ministers may be changed but the policy to this effect would remain the same, he added.

Minister Banskota also urged the media persons to report the positive actions of the government without being inclined to any political ideology and party.

He further lambasted the media for their unswerving support to the move of protesting Dr Govinda KC without any logic.

Minister Banskota argued that Dr KC's demands could not be fulfilled even if the latter himself were the Prime Minister of the country.

Likewise, FNJ chair Govinda Acharya opined for handing over the responsibly of Press Council and Department of Information to local governments.

The AGM concluded with an eight-point declaration including implementation of minimum wages.

On the occasion, journalist Narayan Kilambu was awarded by Maiyadevi Journalism Award.

KATHMANDU, Jan 13: A three-month-long training on Chinese language and culture for Nepali journalists has kicked off in Lalitpur today.... Read More...

KATHMANDU, May 7: President Bidya Devi Bhandari has honoured five journalists with award and prizes at a function held to... Read More...

SOLUKHUMBU, April 2: Stakeholders have laid emphasis on the need of complete implementation of the Journalists' Code of Ethics. ... Read More...

Murder-accused surrenders to police
33 minutes ago