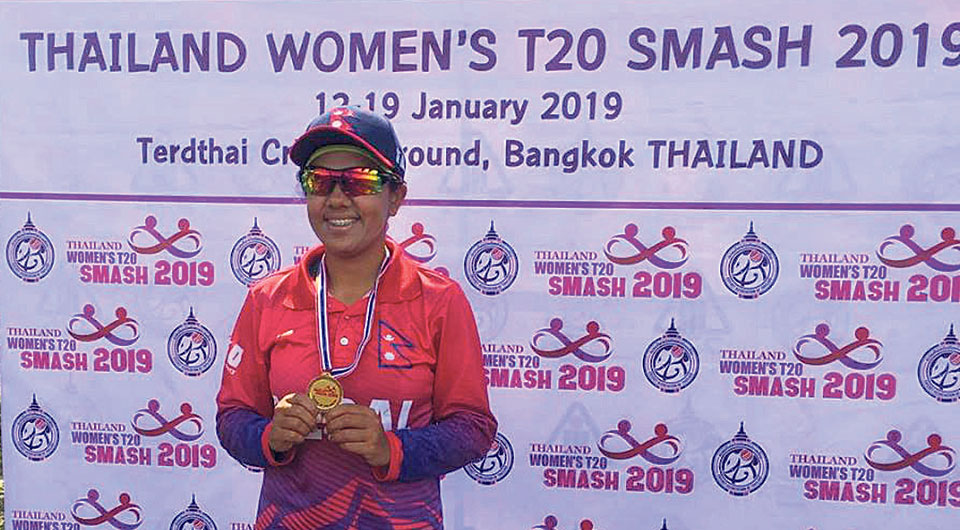 Nepal national women’s cricket team member Karuna Bhandari poses with her man of the match medal after a Thailand Women’s T20 Smash against China at the Asian Institute of Technology Ground in Bangkok, Thailand on Saturday. Photo: Republica

Nepal and China were meeting for the first time in a T20 international match after International Cricket Council (ICC) allowed the status all its 105 member countries starting from January 1.

Nepal won the toss and elected to bowl first as Bhandari scalped three wickets of Zhang Yanling, Zhou Ying and Zhang Xiangxue to limit China to 48 runs for the loss of six wickets at the end of 20 overs. Nery Thapa picked two wickets supported by a sole wicket by Vice-captain Sita Rana Magar. China wicket-keeper Zhang  Chan’s top score of 13 runs was the only double-digit score of the innings.

Nepal completed the chase by 10 wickets with Rana Magar’s unbeaten 24 runs and Kajal Shrestha’s unbeaten 14 runs in an unbeaten partnership of 49 runs. Rana Magar smashed three boundaries during her 25-ball stay whereas Shrestha managed one in her 29-ball stay. Han Lili conceded six runs from her three overs.

Bhandari was adjudged player of the match for three-wicket-haul conceding four runs from her four overs in the match. The United Arab Emirates (UAE) defeated home team Thailand-A by 61 runs in Terdthai Cricket Ground and Thailand defeated Myanmar by 10 wickets at the same ground in other matches of the day. Nepal will face Malaysia on Sunday.

Teams from Bhutan, Hong Kong, Indonesia, Malaysia, Tanzania, Thailand, SL Navy, Kuwait, and Namibia are participating in the T20 Smash. The final will be played on January 18.

VILA-REAL, SPAIN, July 6: Barcelona responded to a trying week by producing a scintillating display to thrash Villarreal 4-1 away... Read More...