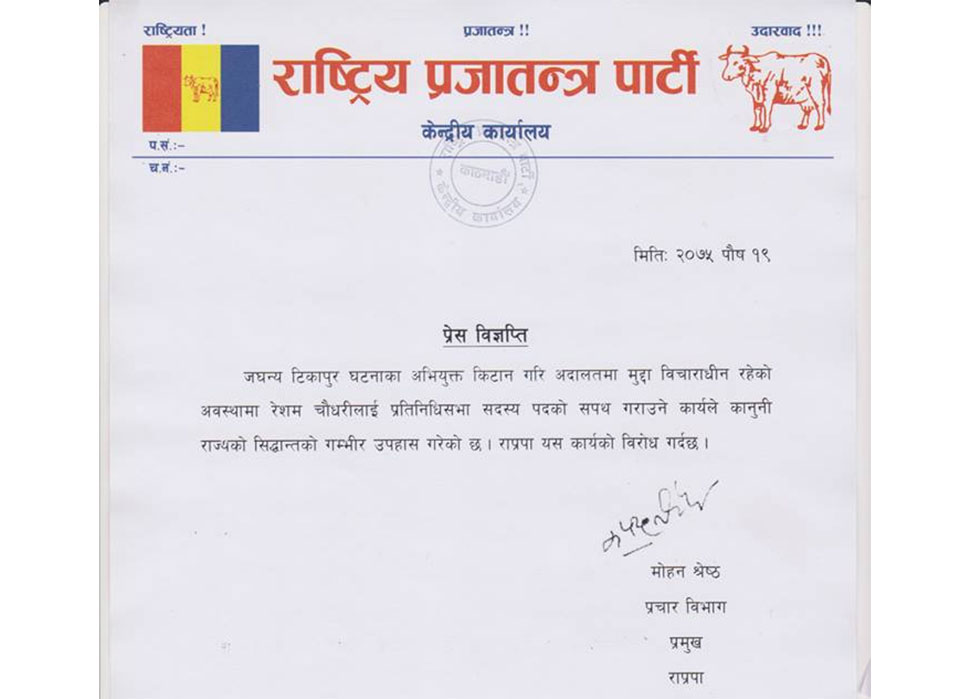 Issuing a press release, RPP has objected to the ceremony arguing that it has made a mockery of the state’s law while his case regarding Tikapur incident is still sub-judice in the court.

“The oath-taking ceremony of jailed lawmaker Resham Chaudhary has made a mockery of the state’s law while the case filed against him accusing him of becoming the main master-mind behind the Tikapur carnage is still sub-judice in the court,” reads the press release issued by RPP today.

Similarly, main opposition Nepali Congress has also objected to the swearing-in ceremony of controversial RJP-N lawmaker Chaudhary saying that it has violated the Rule 244 (3) of the House of Representatives Rules.

Chaudhary took oath of office and secrecy at the parliament’s secretariat in Singha Durbar amid protest today. He was sworn in as the maker by speaker of the House of Representatives Krishna Bahadur Mahara.

Despite taking the oath, Chaudhary will still remain in prison and won't be able to participate in parliamentary meetings.

Chaudhary was the accused main mastermind in the Tikapur incident that occurred on August 24, 2015. In the incident, seven security personnel including SSP Laxman Neupane and a two-year-old had lost their lives in a clash between Tharuhat agitators and security personnel.

Then, RJP-N had threatened to withdraw support from the government if its demands - constitution amendment, swearing-in of jailed lawmaker Resham Chaudhary and withdrawal of court cases and release of prisoners - were not met.

Govt, ASDP and NACCFL sign deal for capacity buildings of cooperatives in Karnali
20 minutes ago