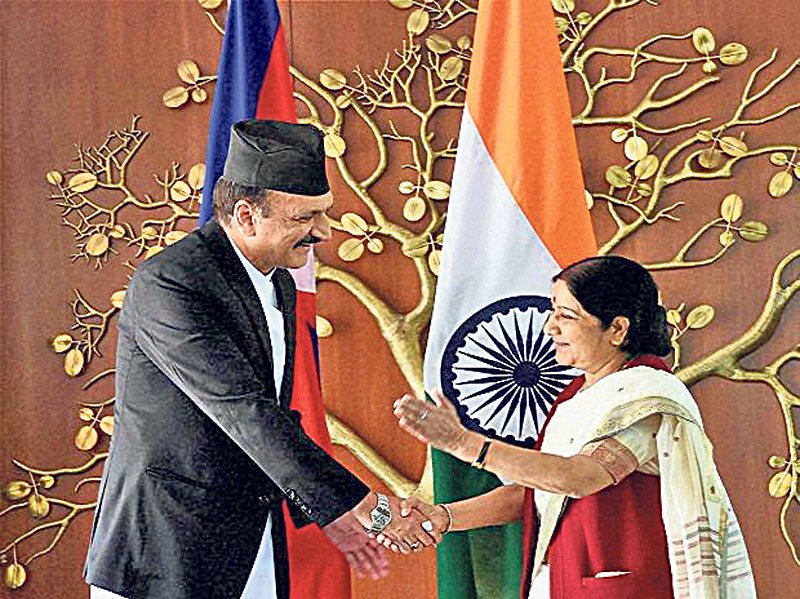 KATHMANDU, Sept 13: Minister for Foreign Affairs Prakash Sharan Mahat, who is on a India visit, requested Indian External Affairs Minister Sushma Swaraj to take initiatives for effective implementation of the agreements reached between Nepal and India in the past.

He also requested his Indian counterpart to make efforts to expedite the projects that are being carried out in Nepal with financial assistance from the Indian government.

A press note issued by Yek Raj Pathak, Public Relations and Press Coordinator of Minister for Foreign Affairs Mahat said Mahat on Monday held bilateral meeting with Swaraj in New Delhi and discussed how the past agreements between the two countries and the projects being carried out with financial assistance of India can be implemented effectively and without any hindrance, stated

According to the press note, Minister Mahat discussed issues directly related to the general public like inundation along the bordering areas as well as import and export, Postal Highway, irrigation, opening more border points with India and managing them well.

Likewise, he also discussed effective implementation of mega projects like Pancheshwar Multipurpose Project during the meeting.

The note stated that Minister Mahat discussed issues of Nepal's national interest and benefits during the meeting and his Indian counterpart took the issues seriously.

Minister Mahat had flown to India on Sunday to lay the groundwork for Prime Minister Pushpa Kamal Dahal's visit to India on September 15.

In the bilateral meeting with Swaraj, Minister Mahat also said that Nepal-India relations should move ahead in an environment of mutual trust.

“I have raised several issues including implementation of various development projects and she (Swaraj) has taken the issues raised by me seriously and assured to carry forward the bilateral relation based on mutual trust,” Minister Mahat said, following his meeting with his Indian counterpart Swaraj.

On Monday, he also met with various India leaders and discussed about strengthening Nepal-India relations.

KATHMANDU, June 28: Minister for Foreign Affairs Pradeep Gyawali said that there has been an agreement with China to open... Read More...

Rapist sent to 18 years in prison
10 hours ago

Home Minister for safe handling of international airport
10 hours ago

EXPLAINER: What’s known about ‘stealth’ version of omicron?
11 hours ago

Cabinet meeting: Japan's grant of up to Rs 2.61 billion accepted
2 hours ago