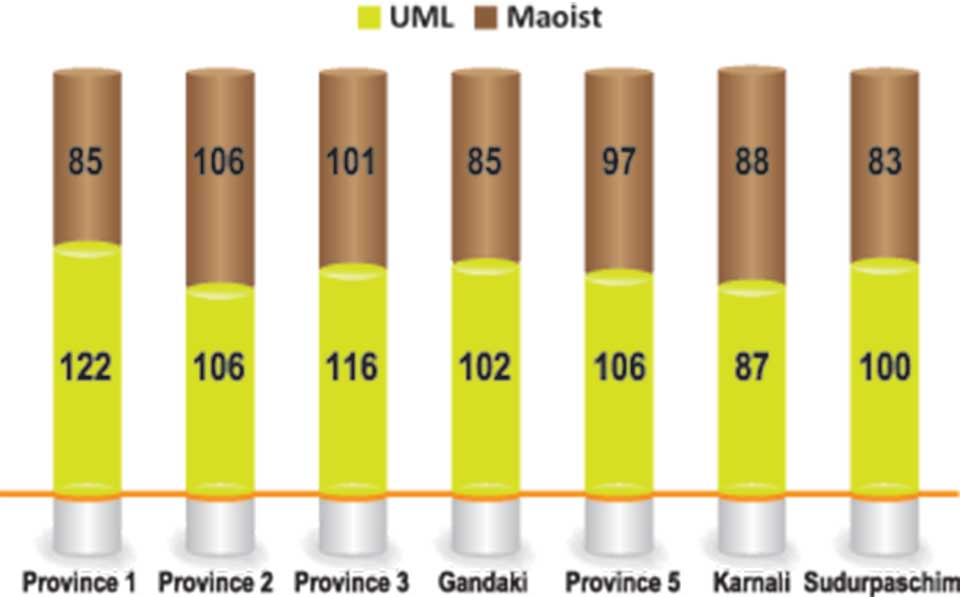 The party has published the list of provincial committee members on Monday, which was finalized last week. Former UML leaders have been allotted 53.2 percent seats in the provincial committees, former Maoists have been given 46.5 seats and the remaining seats have been allotted to the fringe parties that joined the NCP during the unification process. While contesting the parliamentary elections last year, the two parties had decided to share the parliamentary seats on 60:40 basis, which is 60 percent seats for the UML and 40 percent seats for the Maoists.

According to the list, majority of provincial committee members have been appointed from former UML in all provinces except for Province 2 and the Karnali Province. In the 215-member provincial committee in Province 2, UML and Maoists have 106 members each and the remaining three members are from other fringe parties. In the 175-member provincial committee in Karnali, 88 members have been appointed from former Maoist party and 87 from the UML. Former Maoist leaders have only 41 percent presence in Province 1, while the party leaders have over 45 percent presence in the rest of the provinces.

With 217 members, the provincial committee of Province 3 is the party’s largest and the smallest is the 175-member committee of the Karnali Province. The party has inducted altogether 1,387 members in the seven provinces.

KATHMANDU, Jan 15: The ongoing row over the post of House Speaker has ignited a serious dispute within the ruling... Read More...

CHITWAN, May 29: The CPN-UML, Chitwan has demanded to resume the vote counting at earliest of the Bharatpur Municipality. ... Read More...