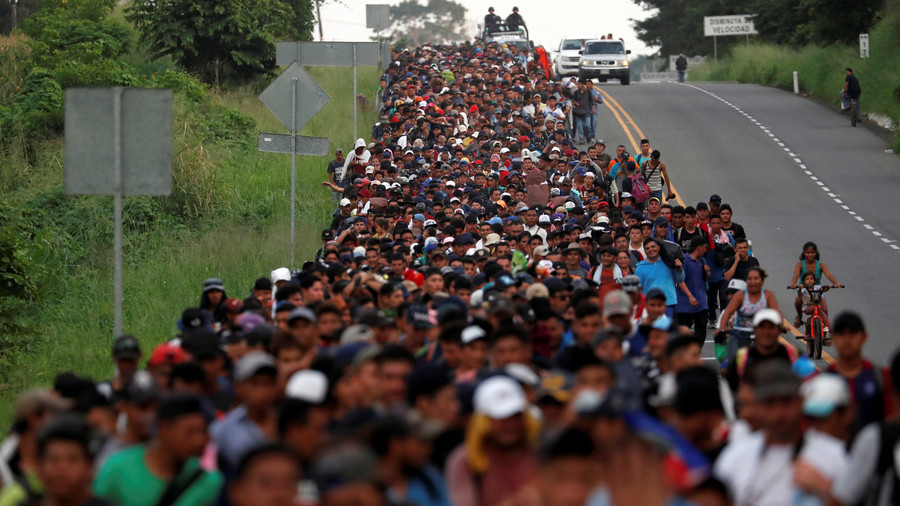 WASHINGTON DC, Nov 3: Twelve Honduran migrants are getting a head start on becoming US citizens by embracing that most American of pastimes: the lawsuit. They are suing the Trump administration for violating their Fifth Amendment due process rights.

The plaintiffs, including six children, are alleging that President Trump’s plans to block the 4,000-odd Central American migrants currently streaming northward toward the US-Mexico border are “shockingly unconstitutional.” They are also suing the Department of Justice and Department of Homeland Security.

The lawsuit points out that it is common knowledge that Honduras, Guatemala and El Salvador are “undergoing a well-documented human rights crisis” and that asylum-seekers are allowed to declare their intentions anywhere, not just at lawful border-crossing points. They claim Trump has no right to keep migrants from entering the US when they have a credible claim of asylum.

Civil rights law firm Nexus Derechos Humanos is representing the migrants. The suit also claims the US is forbidden to send its troops across the Mexican border to block asylum-seekers because the claim process begins as soon as a prospective immigrant indicates they intend to apply for asylum. Ironically, it was right-wing Judge Antonin Scalia who determined in a 1993 ruling that “it is well established that the Fifth Amendment entitles clients to due process of law in a deportation proceeding.”

Asylum claims are granted based on the perception of “credible fear of persecution” in a migrant’s home country, as assessed in an interview, but because of the backlog of immigration cases, migrants often wait years before the hearing that determines whether they can stay in the US permanently. In conversation with Fox News’ Laura Ingraham last week, Trump proposed to build tent cities near the border to house asylum-seekers while they await their hearings, ending the practice of “catch and release” that he partially blames for the influx of illegal immigrants into the country.

Trump’s estimate of how many troops he wants to send south has been climbing steadily since the caravans started massing south of Mexico last month, and his fantasy army numbered about 15,000 at last count. There are currently about 5,200 troops at the border.

The lawsuit also questions whether Trump’s “tent cities” conform to the Flores rule, which prohibits the detention of minors for over 20 days and sets other limits on the conditions in which asylum seekers may be held. A California judge denied the administration’s request for a modification of Flores earlier this year.

The suit is ultimately looking for a legal declaration that Trump’s border plan is unconstitutional. Such a ruling would essentially throw open the gates to the hordes of migrants currently walking and being bused north through Guatemala and Mexico.

Social media reacted with confusion and amusement, marveling that the migrants had thought to pack a US lawyer with them, while others took note that the suit referred to Trump as ‘our’ President.

Honduras zoo struggles to replace the drug money that built it

HONDURAS, Oct 7: An imposingly tall giraffe, powerful African lions and proud Bengal tigers are among the many highlights of... Read More...

Get Out! Government orders Spanish students to vacate dorms for migrants

EUROPE, June 20: Valencia’s regional government has ordered students to vacate their dorms at a student accommodation facility in the port city of Alicante... Read More...

Shuttle service brought into operation at TIA
6 hours ago