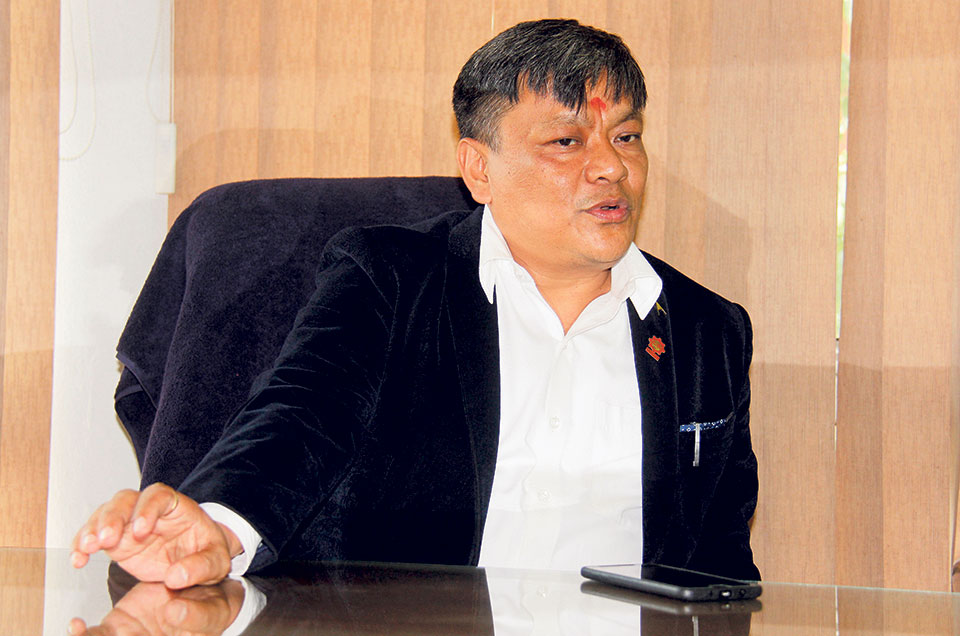 The Federation of Contractors’ Associations of Nepal (FCAN) has long been charged for influencing government agencies for collusion in contracts of development works. A handful big players have allegedly been controlling the professional umbrella body of civil works contractors. But the new executive body elected in September last week, led by Rabi Singh, has come forward with a different promise.

Singh, managing director of Mahadev Khimti Nirman Sewa Pvt Ltd, had his election agenda for fair competition in construction contract and equitable distribution of works. Unlike his predecessors, he is vocal to speak up against about two dozen big players who have hijacked major contracts through collusion and have designed them in a way to suit them only.

The almost monopoly of these few big players has left hundreds of smaller contractors either begging for work or competing fiercely for limited remaining opportunities. The other option for them, unfortunately, is to quit the profession.

Republica’s Rudra Pangeni caught up with Singh to talk about his plans and priorities for his three-year tenure. Excerpts:

‘Fair competition’ in the construction sector was your main agenda for the federation’s election. How would you ensure that?
There are two types of construction entrepreneurs in Nepal. Few entrepreneurs, only about two dozen in numbers, have unlimited work in their hands. Often, they don’t actually have to compete. They also get the contract at the same price of estimated cost. They are sitting on so many projects but have little capacity to handle all of them. Most of the contracts are taken away by these big players. They have used loopholes in the law to collude with the government officials and cartel to acquire contracts of the construction sector. This is what politicians also want to see.

On the other hand, majority of the smaller contractors cannot compete with them in such unfair environment.

We can do nothing if the government does not take this seriously and controls it. In the past, executives of FCAN had silently supported these anomalies. This should stop. This is what I raised in the election and got elected. I and the whole new team of FCAN executives no more support such cartel and syndication. We keep on raising these matters strongly with the government.

What steps have you taken to stop collusion and cartel after you were elected?
We are yet to take any policy decisions yet. There were also some commitments made by executives in the past but such commitments were never fulfilled. Those were not real steps, but just moves to give false impression. We will keep on raising this issue.

Fair competition is my agenda, and that is what I am elected for. Contractors should be provided an equal-playing field for participation in procurement. Fair competition means the goods and services that the government procures should be at real price. Bidding price should neither be too low nor too high. We want to make sure the work is distributed in a fair and professional manner among all contractors.

The government should implement prevailing laws to help good governance of public procurement. There is a provision of ‘bid capacity’ in the law that needs to be implemented. Bid capacity means contractors can participate in a bid only based on their capacity. Currently bigger firms have contracts of over Rs 20 billion at their hand, which is beyond their capacity. But smaller firms don’t even have work worth Rs 20 million.

There are about 15,000 entrepreneurs and among them 20 of class A -- the big players -- hold most of the contracts. There is a yawning gap between the big and small groups.

Do you mean there is no equal opportunity in the contract business?

Yes, there is no equal opportunity. I fear there will be further manipulation of the law to limit competition. Currently Rs 1 billion (including VAT and contingency), with real worth of work at around Rs 700 million, is the set threshold for foreign contractors to participate in any construction work. But there is an preparation underway to tweak the provision to increase the threshold to Rs 1 billion (excluding VAT and contingency), with real price at Rs 1 billion. Barring foreigners means medium-sized contractors cannot participate due to lack of enough experience and annual turnover. Had there been no threshold, medium-sized contractors could bid in the large projects under joint venture with foreign companies.

Such teak in the law will only favor the big contractors, giving them the entire playing field because all of them have increased their capacities to Rs 1 billion, up from their previous capacities of Rs 700 million.

At a press conference in January, shortly after his election victory, erstwhile chairman of CPN-UML Khadga Prasad Oli blamed then Prime Minister Sher Bahadur Deuba of engaging in cartels of project contracts and packaging the projects to benefit only the big contractors. But there has been no change yet after Oli became the prime minister.

However, PM Oli has repeatedly made commitments to stop corruption, and I firmly believe he will do the needful to stop these anomalies. I have full trust on him. We will meet him soon and talk with him. The packaging and cartels should stop immediately.

Would you mention few incidents of such collusion?
Tender packaging continues unabated. Recent contracts by the Department of Railway are also packaged to suit select contractors. In bridge contracts, new criteria about annual turnover in bridge works has been inserted to the existing criteria of number of bridges and length of bridges as experience to be qualified. These are the attempts to award contracts to select contractors, and this obviously allows room for collusion.

In the past, big contractors used to influence FCAN to get what they wanted. As you stand against them, have you got any pressure or threat?
I had thought that big players were at the center and doing everything themselves for packaging and collusion. But that turned out to be only partially true. They are definitely working for their benefits but there are some middlemen behind all the illicit activities. The middlemen who also work in joint venture with those big players have a key role behind all this. They work as brokers to lobby with politicians and bureaucrats. They are even trying to increase the threshold to Rs 5 billion from the current Rs 1 billion for foreign contractors. This means foreign companies/firms won’t be allowed to participate in any work. This indirectly bars medium-sized contractors as they would otherwise partner with foreign companies. In other words, this would further limit competition. FCAN is against all such attempts.

What are your other priorities?
If the government really wants to stop low bidding and get the project executed on time to deliver prosperity as promised, it should divide development works among the three tiers of governments. Local levels should implement projects worth Rs 50 to 60 million and these projects should be implemented via local contractors. Works between Rs 60 to 150 million should be implemented by the provincial governments, whereas projects above Rs 150 million should be executed at the central level.

The recent Civil Code has a provision of jailing a contractor up to 10 years and imposing fine of Rs 100,000 for knowingly delivering sub-standard works. Why do you have reservation against this law?
We are not criminals but entrepreneurs. We need a separate entity, not the agency that implements or manages projects, to take action against us in case we have committed any mistake. It is not justified to put all the blames on contractors for any substandard construction work. Also, such punishments should not be only on contractors. Project Management Unit and its officials, consultants and agencies are also equally responsible for any substandard work.

You stood to protect Pappu Construction that has delayed many projects. Why do you protect such contractor that has bad reputation?
Contractor is not alone behind these delays. Business people should not be arrested for failing to complete the given tasks. There are several provisions in the Public Procurement Act and laws to take action against contractors. The project managers can fine the contractor, can terminate the contract and recommend for blacklisting the firms/company if the work is not satisfactory. But the authorities are trying to discourage the construction entrepreneurs by arresting them. This is not a fair way of contract management.