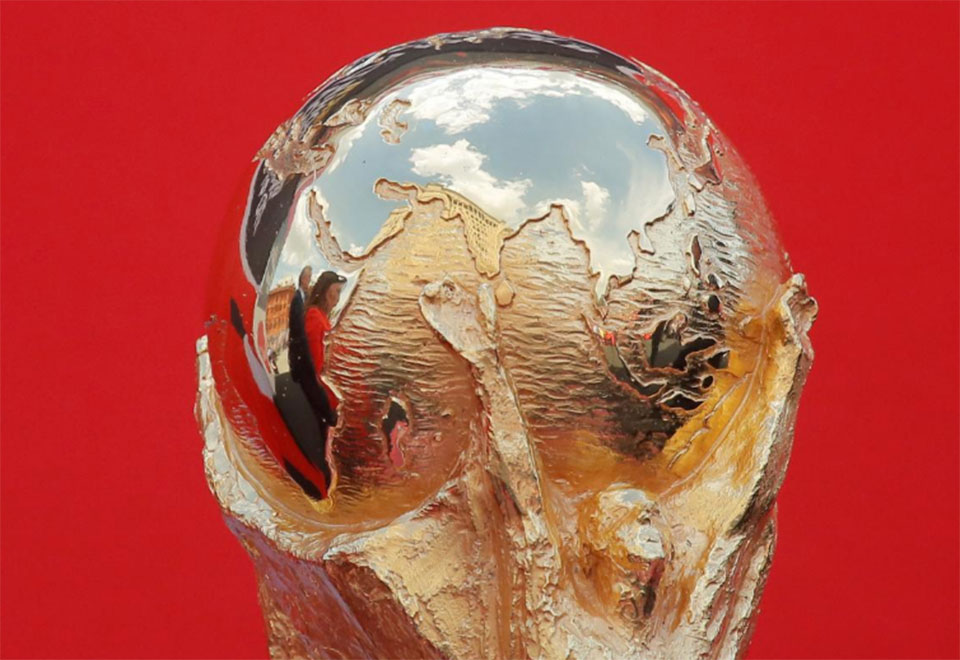 FILE PHOTO: The FIFA World Cup Trophy is seen during a welcoming ceremony upon its arrival in Moscow, Russia June 3, 2018. REUTERS/Maxim Shemetov//File Photo

LONDON, Oct 4: UK Sport said on Wednesday that holding the 2030 World Cup in Britain would be a “crowning achievement” to bookend a decade of sport that includes plans to host the Ryder Cup, the world athletics championships and the grand departs of the three major cycling tours.

British Prime Minister Theresa May earlier this week gave her backing to a potential World Cup bid, which is currently the subject of feasibility studies from the English Football Association.

UK Sport, the country’s governing sporting body, published a list of 54 “mega” and “major” events it said it would be interested in hosting over the next 15 years to showcase Britain to the world.

These also included the women’s Rugby World Cup as well as the men’s edition, which was hosted in England and Wales in 2015, and the multi-sport European championships, hosted in part this year by the city of Glasgow.

A plethora of sporting events are already scheduled to be hosted in Britain over the next few years, with the Cricket World Cup, golf’s Solheim Cup and the World Road Cycling Championships, among others, set to take place next year.

“The biggest target on this list is the football World Cup,” UK Sport Chief Operating Officer Simon Morton told reporters at Lord’s cricket ground when asked to assess which events would constitute a successful programme.

“If we bid for that event, landing (it) would the crowning achievement on this, almost irrespective of what we’ve got.

“I think (securing) a couple of the Grand Tours that we’ve talked about (would be a success).”

England, which hosted and won the 1966 World Cup, failed in bids to host the event in 2006 and 2018 with the latter costing a reported 18 million pounds.

UK Sport’s Head of Major Events Esther Britten said it was right to be more cautious this time around.

“Any FIFA World Cup bid needs to be an alliance between the associations and the government. It is significantly expensive, so it needs to be a partnership between both,” Britten said.

Such a cost could be offset by the 2 billion pounds that UK Sport said the programme of events has the potential to generate in economic impact as well as the possibility of attracting more than 15 million spectators.

Britain held its first world athletics championships last year in London and there is a strong desire to host it again with the event having broken attendance records.

“I would love to see the world athletics championships return, personally,” Morton said. “I think that event is undervalued, the sport has had some challenges but it is a truly global sporting event and good value for money for the country.”

Morton was not daunted by the potential impact that Britain’s exit from the European Union next year could have on any bidding plans for sports events.

“We’re trying to see it as an opportunity, fundamentally, which is about how does the rest of the world see us,” he said.

“Really huge sporting moments can really shift the dial on that sort of stuff... so a lot of what sits behind this list is to think about how we can use Brexit as an opportunity.”

With France having just staged golf’s Ryder Cup, the next available opportunity to host the biennial event would be 2026 or 2030. Morton said that a planned course in Bolton, England could be the venue for either year.

There are ambitions to host the grand departs of the cycling tours a lot sooner, with the country hoping to capitalise on the fact that all three titles are held by British riders — Chris Froome (Giro d’Italia), Geraint Thomas (Tour de France) and Simon Yates (Vuelta a Espana).

Wales could host the Giro, while English county Yorkshire, which hosted the grand depart of the Tour de France in 2014, was being looked at as a destination for the Vuelta, Morton added.

Salman to quit as 'Bigg Boss' host, to be replaced by Farah Khan?

Salman Khan is reportedly planning to quit as the host of ‘Bigg Boss’ with Farah Khan being rumored to replace... Read More...