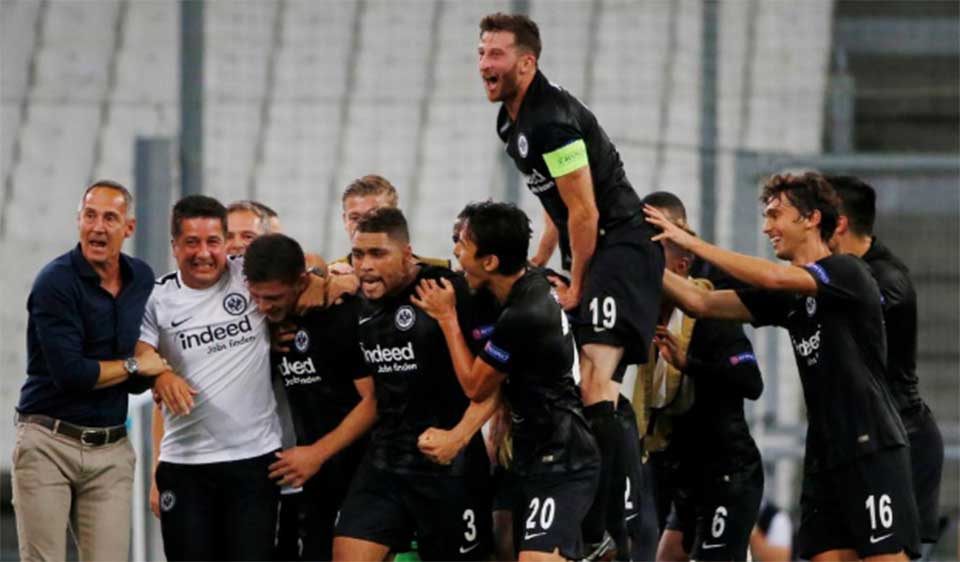 LONDON, Sept 21: Olympique de Marseille were the fall guys on a hectic opening night of Europa League group stage action as German club Eintracht Frankfurt returned from the south of France with a surprise 2-1 victory on Thursday.

Last season’s runners-up made the perfect start with Lucas Ocampos scoring in the third minute but Eintracht hit back through Lucas Torro before Luka Jovic grabbed a late winner.

Eintracht, playing in their first European campaign since the 2013-14 season after winning the German Cup, were joined at the top of the early Group H standings by Lazio who beat Apollon Limassol 2-1 with goals by Luis Alberto and Ciro Immobile.

Sevilla, Europa League winners in 2014, 2015 and 2016, also opened with a victory, thrashing Standard Liege 5-1 in Group J with Ever Banega and Wissam Ben Yedder both scoring twice.

Unai Emery, who led Sevilla to that hat-trick, returned to the competition with his Arsenal side beating Ukrainians Vorskla Poltava 4-2 as Pierre-Emerick Aubameyang netted twice.

Emery’s 32nd Europa League win was a record for a manager.

The so-called ‘energy drink derby’ turned into a thriller with last season’s semi-finalists Red Bull Salzburg winning 3-2 at RB Leipzig in the first competitive meeting of the teams.

The hosts, whose full name is RasenBallsport Leipzig, battled back from 2-0 down to level the scores but Fredrik Gulbrandsen struck for the visitors in the final minute.

The energy drinks manufacturer last year argued it no longer has a controlling stake in the Austrian club and merely sponsors it, satisfying UEFA that the two clubs could face each other.

Also in Group B, Celtic beat Rosenborg 1-0 thanks to a late goal by substitute Leigh Griffiths.

Celtic’s Glasgow rivals Rangers, managed by Champions League and UEFA Cup winner Steven Gerrard as a player at Liverpool, twice battled back to draw 2-2 at Villarreal in Group G.

Despite the gulf in status, Dudelange produced a resolute display and Milan needed Gonzalo Higuain’s deflected 59th-minute effort to seal a 1-0 victory in Group F.

The other match in the group ended scoreless between Olympiakos Piraeus and Real Betis.

In Group D, Croatians Dinamo Zagreb enjoyed a 4-1 victory over Fenerbahce but there was a surprise as Anderlecht went down 1-0 to Spartak Trnava in Slovakia.

Nepse loses 10.83 points on concern over contraction of liquidity in banks
31 minutes ago