The designer with a dream 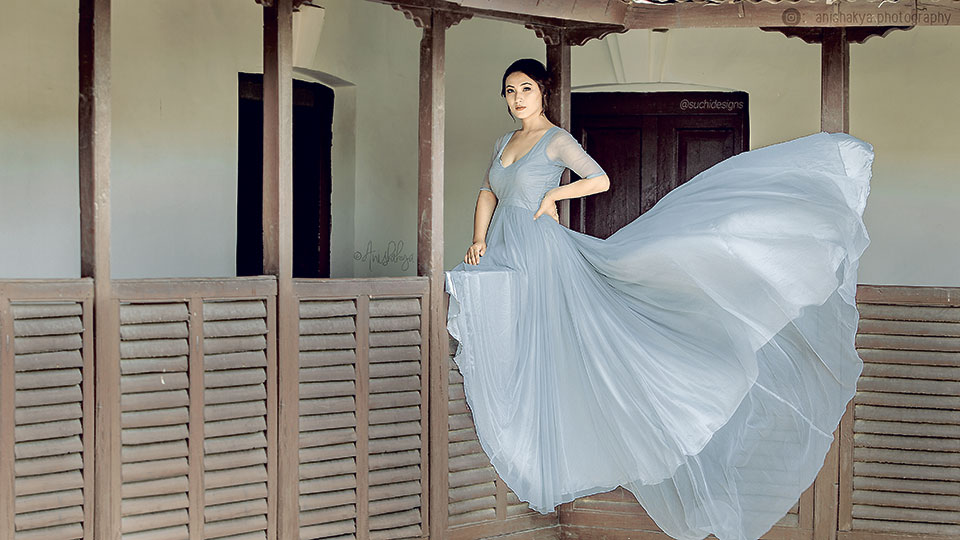 Fashion designer Suchina Shrestha believes that good clothes equals to good life, and she’s all set to give the residents of Kathmandu a sample of that life through her designs. Although it has been just three months since she launched the outlet for her brand ‘Suchi Designs’, Shrestha is not a newbie in the fashion industry. She has been involved in fashion designing for more than four years now and claims that she has realized that this is her one true calling in life, and that she is determined to pursue it against all odds.

Originally from Hetauda, Shrestha came to Kathmandu about six years ago to start her plus two at Global College. After the completion of her high school, she took about two years off from studies to figure out what she wanted to do in life. “I traveled back and forth a lot between Kathmandu and Hetauda during those two years. I was not sure what I wanted to do and the career path I wanted to take in the future,” says Shrestha before adding that she is very grateful that everything worked out for her in the end.

Shrestha confesses that it was designer Subexya Bhadel who got her interested in the world of fashion designing. She reveals that around the time she completed high school, Bhadel was one of the biggest names in the Nepalis fashion industry. And once Shrestha finally saw a Subexya Bhadel design with her own eyes, she understood the hype around the designer. In both her career and life, Shrestha says that she sees Bhadel as her biggest inspiration and motivation.

Shrestha joined IEC School of Arts and Fashion with this new found interest in fashion designing and graduated from the same college in the year 2017. While she was still studying Bachelor’s at IEC, she reveals that she did a lot of freelance designing and participated in a lot of fashion designing events. Among these, Shrestha lists TGIF Nepal Fashion Week 2016, Miss Little Star 2016, and New York Fashion show 2016 (in which Shrestha was a part of Redvelvet) as the most prominent ones that have been the highlights of her career so far.

Hardworking as she may be, Shrestha’s fashion designing journey was not all sunshine and rainbows. A particular event that took place about a year ago really shook her. Because she was selected as one of the student designers who got to represent IEC during the 2016 TGIF Nepal Fashion Week, Shrestha reveals that she applied for a solo segment during the next TGIF Nepal Fashion Week event. She claims that she was really confident that she would be given the needed approval as she had grown tremendously as a designer within that one year. Unfortunately, the proposal got rejected and this particular event really affected her.

“At that time, my career was growing. I really wanted to take part in that event and since I had enough experiences through my previous work, I was so sure I would bag it. The rejection was a big surprise, and an unpleasant one at that,” says Shrestha. She adds that she mourned over this rejection for a long time and was also seriously considering quitting the fashion industry at one point. “It really dragged me down and made me question my decision,” she says.

Support from her friends, family, and close ones is what helped her move on from this bout of foundering. Shrestha states that she is very grateful to everyone who has shown their love and support for her and her work. As she started getting back on track with her work, Shrestha got a lot more offers for shows and events – some of which actually came her way because of her friends’ generous recommendations.

After working as a freelancer for a long time, Shrestha mustered up enough confidence to consider launching her own store. She bought a boutique that was already up and running at Devkota Sadak in New Baneshwor, Kathmandu and remodeled its interior to suit her taste. The store has been running since May but Shrestha claims that, till date, she is just operating the pre-launch sales.

The date for the official opening of ‘Suchi Designs’ is set for September 18, 2018 and, for a week, till September 25, Shrestha reveals that she is offering about 20% off on all her designs. She says that she is prepping for a grand opening ceremony of her store and that she is quite hopeful this step will help her career reach new heights.

Shrestha has some big plans sketched out for her career. She reveals that she slowly wants to edge towards mass producing her designs and establishing her brand overseas as well. Although she does not have an exact deadline for these goals, she is hoping that with dedication and hard work they will come true soon enough.

When questioned about her thoughts on the Nepalis fashion industry right now, Shrestha claims she is quite disappointed with the way beginners are treated here. “If you are not a famous designer, you will not get paid. I understand that being a part of big events and photo shoots will promote our brands among a wider audience but if you use our products, you have to at least pay us a little as this is how we sustain our living,” she states before adding that even in such unfair working conditions, a person who is dedicated and passionate will persist and eventually succeed.

One of Shrestha’s best creations till date, this long flowy gown is literally what dreams are made of, and we kid you not. Everything from the color to the fit and design of the gown seems magical. Shrestha confesses to being heavily influenced by princess gowns while designing this. She also claims that the gown is supposed to give the wearer an elegant look with a touch of princess-y appearance. It has layers and layers of fabrics to create a beautiful flow that is visually mesmerizing when the wearer moves around in it. 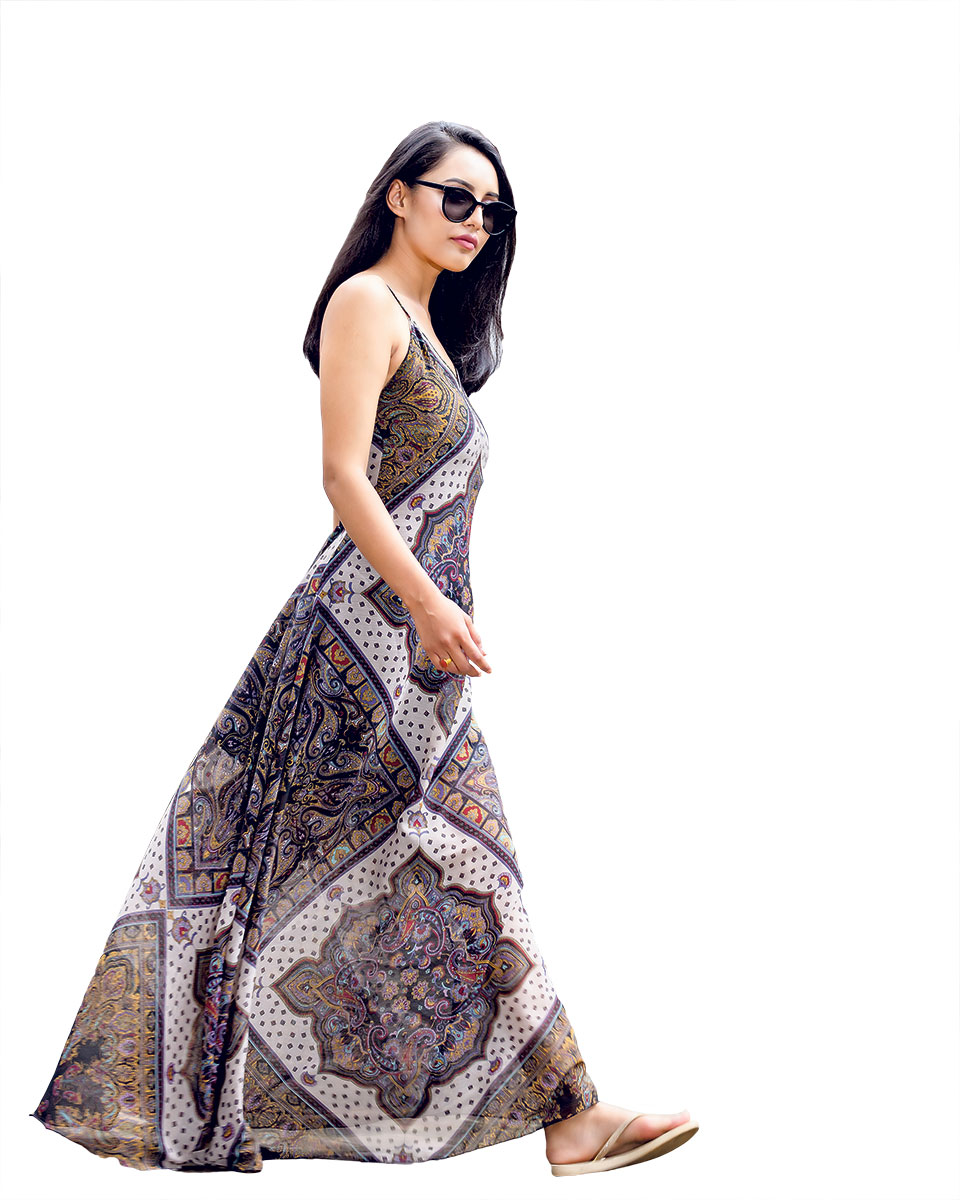 This bohemian style dress is chic and comfortable at the same time. While the design flatters almost all body types nicely, the fit of this dress is also very comfortable. It is flowy, loose, and very easy to move around in. With minor alterations regarding the accessories you pair it with, this maxi dress can be dressed up or down depending on your requirement. When worn with a pair of sandals, this dress looks very casual but when worn with high heels and the right accessories, it can look seriously polished too. 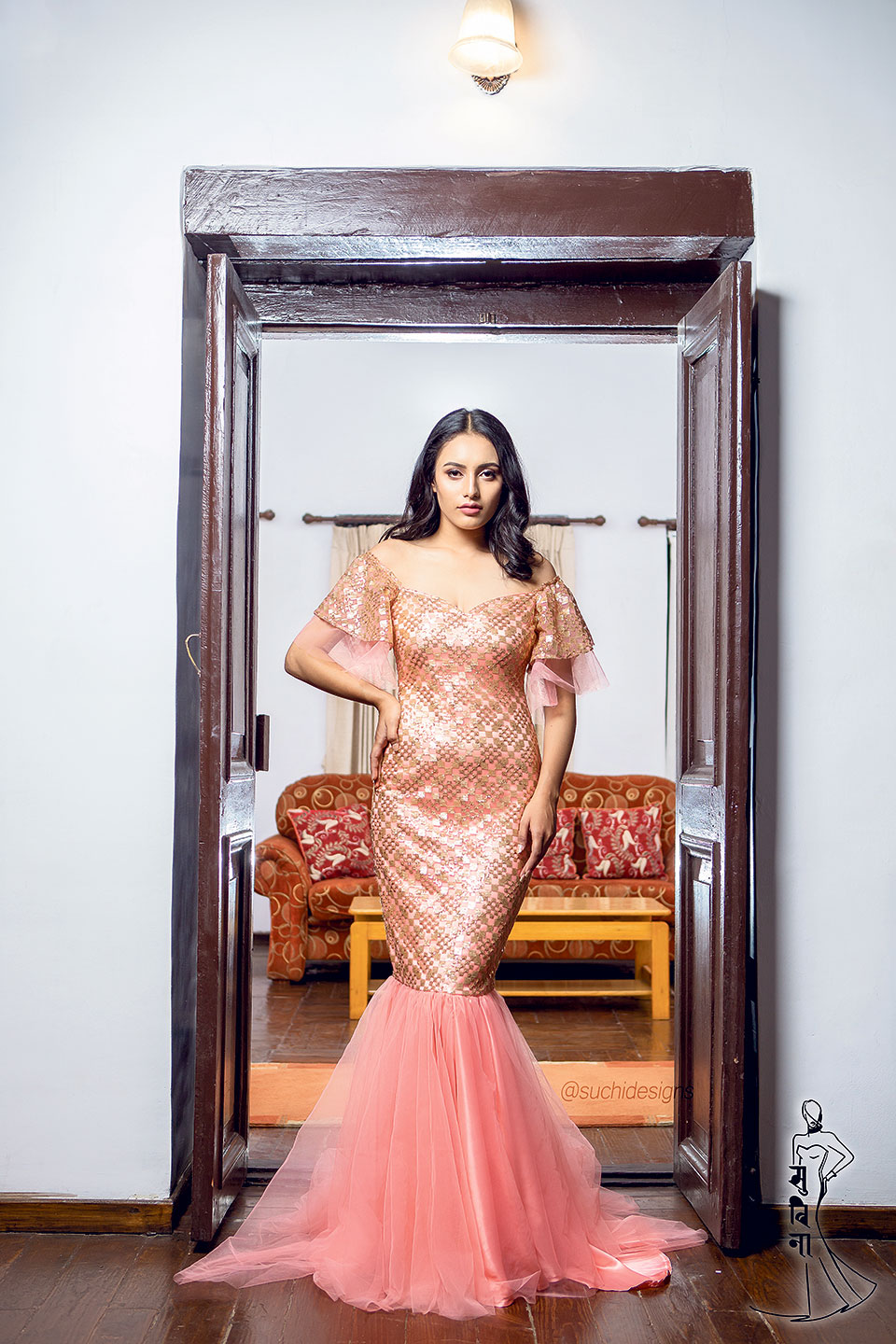 This gown is the definition of elegance and glamor stitched into a masterpiece. A mermaid gown is a style that fits closely to the body through the torso and hips and the bottom fishtails out in a flare to the floor making the wearer look sophisticated yet sexy. This dress creates an obsequious silhouette. Additionally, the peachy color of it complements all skin tone shades, challenging the commonly practiced norm in fashion of creating items that only suit the fair skinned. 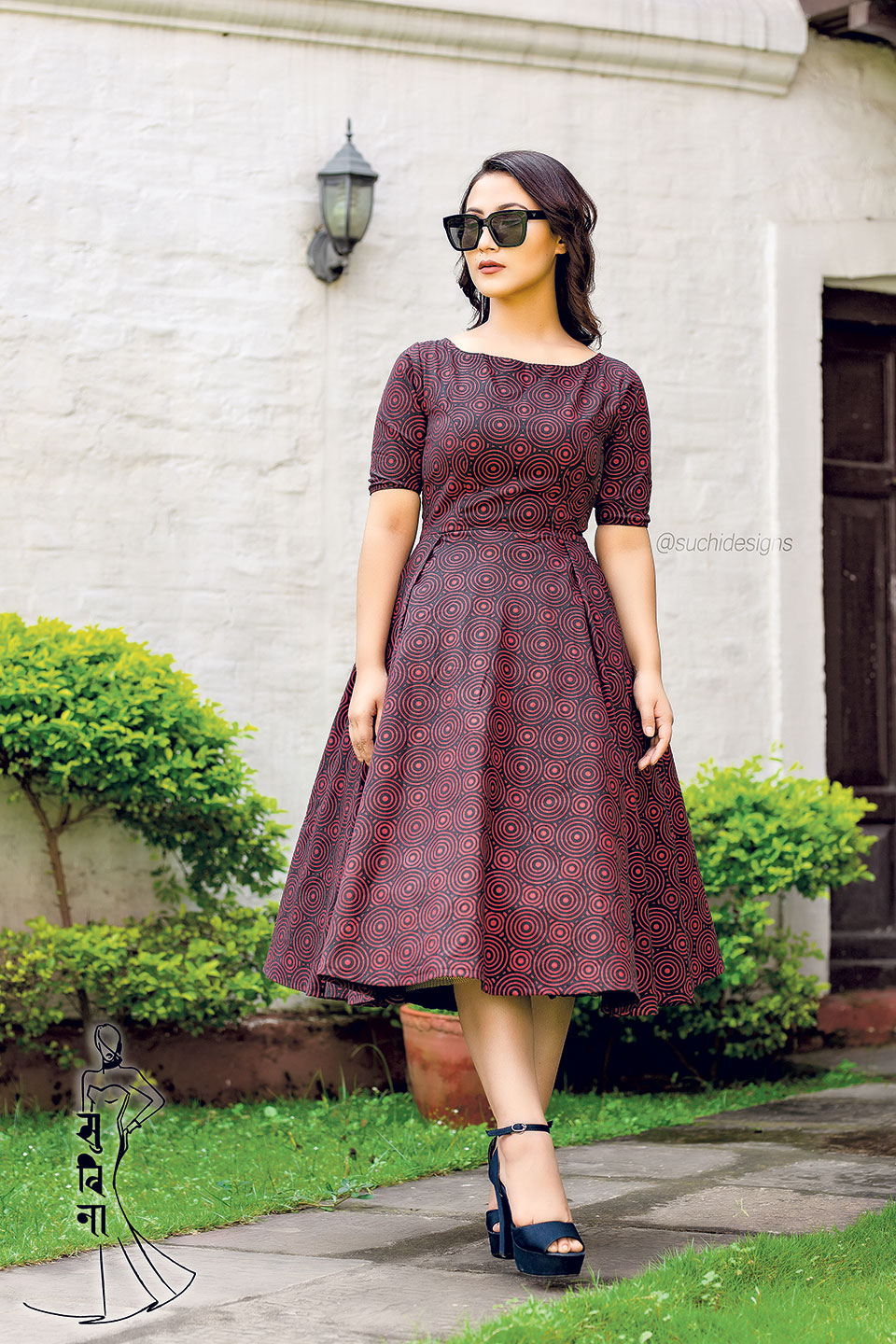 Shrestha claims that western style clothing is her niche in fashion designing and that she prefers making these pieces over traditional Nepali style clothing. This dress is a perfect example of her excelling in her niche. This pleated ball dress is a refreshing alternative to the customary structured dress worn in formal settings. It gives you a heavy and bouncy look and is more comfortable than a structured dress. Shrestha created this dress specifically targeting the warmer months since it sits on your skin softly without suffocating it.

Orient fashion as a trend is nothing new but it isn’t a style that many consider to be fashionable. And... Read More...

Certificate cannot define your talent unless you have skills to sell it. Manis Joshi, 21, an aspiring and young fashion... Read More...

Prohibitory orders in Valley extended by a week
16 hours ago

Prohibitory orders in Valley likely to be extended by a week, CDOs to take final call later today
20 hours ago