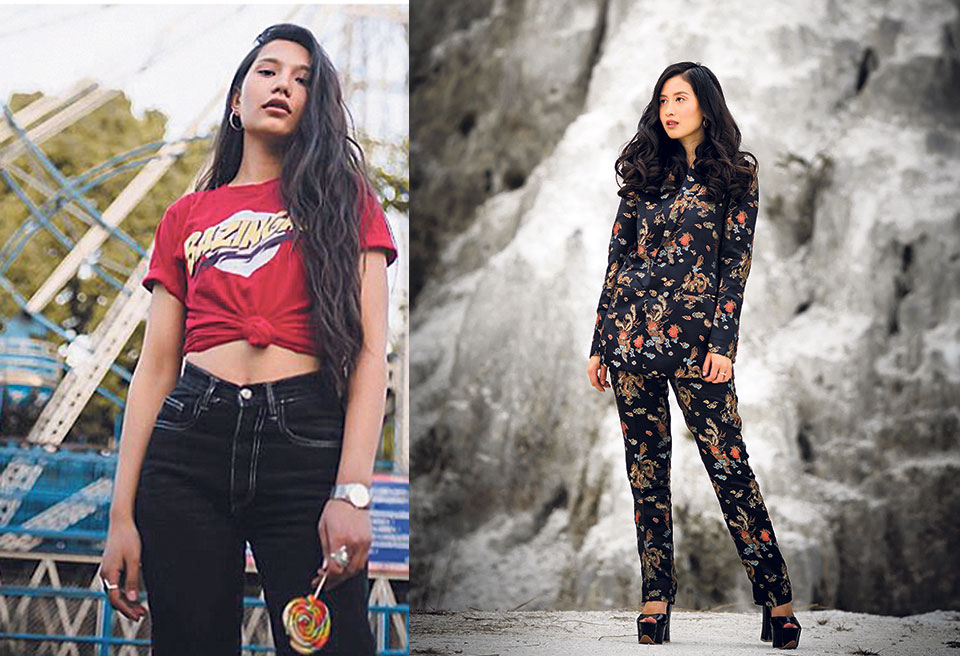 Orient fashion as a trend is nothing new but it isn’t a style that many consider to be fashionable. And it can be quite tricky to get it right as well. But 21-year-old Ojaswi Shrestha, stylist and designer based in Kathmandu, claims that oriental fashion is very stylish and can really up your dressing game.

“It’s interesting, has a rich history, looks striking and feels super aberrant and that makes it really cool,” argues Shrestha who has based the first official collection from her label, Uzu ko Avenue, around oriental fashion.

Launched in 2017, Uzu ko Avenue has only been like a side project for Shrestha, who started working as the in-house stylist for DS Collections before even graduating from college. She is currently pursuing her bachelor’s in Fashion Design from Namuna College of Fashion Technology. Although Shrestha has always had big plans for the future of her brand, she hasn’t really been able to give a lot of time to put them into action because of her stint as a stylist for DS Collections. Shrestha also works as a freelance stylist and that too takes much of her time.

But starting with the first couple of pieces released from Uzu ko Avenue that exclusively featured varieties of denim jackets and jeans, that were released early September this year, Shrestha confesses that she has started putting in more effort into developing her brand. She intends to come up with new pieces and lines more frequently from now on.

This new oriental themed collection from Uzu ko Avenue is set to release very soon: sometime between late October to early November this year. Shrestha reveals that since she’s the only one working on Uzu ko Avenue, it takes her a little longer to get everything done by herself.

“I’m actually looking to building a skillful and reliable team to work with me on future collections and releases,” says Shrestha who is already working to launch another fall/winter collection consisting of pieces made from corduroy and denim in vintage silhouettes. These pieces, she says, will be reminiscent of clothing that were trendy during the 1990s and 2000s.

The theme and the collection
Shrestha mentions that she has always been fascinated by oriental arts and culture. So, working on this collection has been exciting and enjoyable for her. And it’s also been a learning process, she says.

Although the entire collection has been inspired by eastern culture in general, she was particularly inspired by Chinese and Japanese bridal clothing. Furthermore, the vivid colors present in such clothing, and the patterns and motifs of the fabrics these clothes are made of are the aspects of oriental clothing and culture that Shrestha has highlighted in her collection.

Even though the soon-to-be-launched collection from Uzu ko Avenue only incorporates about six to eight set of looks, Shrestha claims that most of the items will be available in multiple colors, thus giving you a lot of choices. Moreover, you can also customize your order in terms of size, fit and even design and silhouette.

“Every person has different stylistic preferences. So one of the core values of Uzu ko Avenue is to let buyers customize the designs according to their preferences and needs,” says Shrestha.

Shrestha has also done a lot of research to perfect every detail in this collection. She handpicked local fabrics with patterns that reflect the chosen theme and inspected the finished products thoroughly to make sure nothing was out of place. She started working on the designs for this collection about three months ago and states that the biggest challenge she faced during this period was not having sufficient time to complete her designs fast enough. She actually worked throughout the Dashain vacation and even outsourced a few of her products to get everything ready by the self-imposed deadline.

Even the locations Shrestha selected for the photoshoot of the collection, the kind of makeup done on the models, and the direction of the photoshoot reflect the vision she has for it. She states that because the collection fits the festive look, she initially wanted to release it before Dashain but because of a few hindrances, mostly bad weather and people traveling out of Kathmandu to celebrate Dashain, she couldn’t get a few things right. She also didn’t want to compromise, which is why she opted for a slight delay and decided on releasing the collection just before Tihar.

According to Shrestha, the primary target groups that she had in mind for the collection were girls and women in their late teens to mid thirties. But the items, she adds, have come out to be versatile enough to be worn by women of all ages. Because Uzu ko Avenue is an online brand, Shrestha mostly promotes her collection on the brand’s Instagram page, which is rife with ideas for anyone with an inclination towards fashion. She reveals that she is also working on releasing a behind the scenes video that showcases the work that has gone into the making of the collection on YouTube to further promote the collection.

Fashionable but the sustainable way

Now that the sustainability wave has hit us in various aspects of our lives, it’s high time we figure out... Read More...

Winter has us bundling up in layers. The woolen sweaters and down jackets are what keep us warm and snug.... Read More...