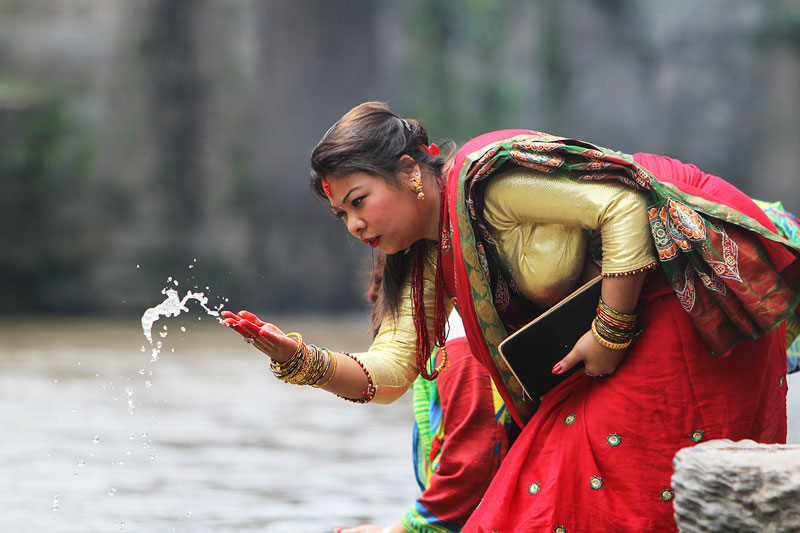 The big red blur is here. Teej is just round the corner and this festival really wouldn’t be complete without the obligatory ‘offendees’, people who have apparently spent the remaining months of the year getting primed to voice their discontent over something or the other in the build up to this festival. It has become some sort of a weird annual custom every year for people to get worked up over various aspects of Teej, in private conversations, newspaper columns, radio stations, and now on social media.

It’s not hard to deduce why – this festival involves aspects of patriarchy and religion played out against a backdrop of evolving gender roles and changing social norms. Even after accounting for all of the above, this annual ‘moaning festival’ that heralds the actual one can get on one’s nerves.  The main culprits are two very distinct groups, who with their own set of complaints – give or take a few variations – are responsible for imparting a distinctly ‘ground hog day’ flavor to the buildup of this festival.

Firstly, there’s the ‘bikriti’ brigade – which contrary to popular perception – isn’t made up exclusively of men. It’s hard to pinpoint what they actually get offended by because ‘bikriti’ is an all-encompassing term but one of the elements is supposedly the overly long build up to Teej. This really isn’t anything new or unique to Nepal because festivals all over the world have already been appropriated by commercial interests and the feel good factors of most of them are inevitably commerce driven.

A case in point is the Christmas lights in major shopping areas in the UK going up a full month before Christmas or Diwali in India being an endless stream of offers, sales, discounts, film releases and so on.  Why should Teej be any different? If giving gifts or expecting them is ‘bikriti’ then I’m afraid it’s all doom and gloom for us.

The pre parties at the party palaces and the singing and dancing beforehand that are part of the buildup and the ‘bikriti’ also do not rest easily with this brigade. If women decide to fast for one day and would like to eat their weight in food during the preceding month as some sort of bizarre preparation, it should only be their problem.
Jokes aside, if the elaborate buildup to Teej didn’t exist, then what would be there to celebrate? It’s not like the actual act of keeping a fast is a whole lot of fun. Just ask the people who do it. In festivals as in life, it’s not so much the destination (the fast) as the journey (the buildup) that matters. The buildup serves a purpose, to bring about the Teej ‘feeling’, which really for women should be more than the growl of an empty stomach.

The other group of seasonal whiners are the ‘buffet feminists’ who pick and choose their issues. They are the sort who will sit on their bottoms the whole year conveniently apathetic to other gender based issues until they have the chance to dole out the exact same tropes – variations on the theme of perpetuating patriarchy – every year during Teej.

The comical part is this hypocrisy is often exhibited by people who aren’t necessarily averse to the food and celebrations in the build up to Teej.

How does fasting help one get a good husband or ensure the long life of the existing one? Is marital bliss the sole responsibility of women? Why is only the wife expected to fast and not the men? I honestly don’t see how I’ll live longer or be any happier if my wife doesn’t eat for a day. There’s a joke in the latter half of that statement somewhere but I think I might have already offended my fair share of people today.

The questions are many and I’m certainly not qualified to answer any of them but the one thing that these arm chair feminists miss is the fact that a lot of women – almost exclusively in this case younger women – aren’t concerned or at best lukewarm to the legend behind the festival and a good proportion of them choose not to fast on the day.

For many it’s just a chance to celebrate being a woman in the company of other women or perhaps the opportunity of going back to their maternal homes after a long time – although I suspect that has lost much of its significance recently due to improved mobility and relaxed social norms. Granted that those women described above are in a small minority but it at the very least reflects changing social attitudes and total change will only come about slowly, not through seasonal whining and moaning but through awareness and passage of time. After all, Rome wasn’t built in day. I should think that this trend bodes well for those against promotion of patriarchal traditions.

The fact is that the way we celebrate Teej has changed and is evolving even as I write this and not always for the worse. A lot of people are using the lead up to and the occasion itself to do social good like organizing blood donations, fund raising or raising awareness of gender based issues. The same television channels, newspapers, private businesses and other interests that drive the commercialization are always on the lookout for new angles on different stories and that can only be a good thing. And in the future who is to say how we might be celebrating Teej in 2100 BS but until then I say – live and let live.

KATHMANDU, Dec 2: Sushil Adhikari, 27, cannot see through his eyes. The visually impaired however has no regrets. He feels that... Read More...