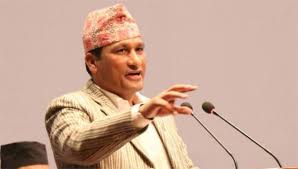 KATHMANDU, July 8: Home Minister Shakti Bahadur Basnet has informed that 47 people were killed and 16 others had gone missing in the country in the course of landslides and flooding in previous three months.

He gave this information at today's Legislature-Parliament meeting.
The Home Minister said that a total of 121 incidents of landslides and flooding occurred during the period and that 138 houses were damaged completely and 160 others partially.

He said that efforts were on to resume transportation along various highways like Araniko, Darchula, Karnali and Pasang Lhamu obstructed by landslides.

The Minister also reported information, to the parliament, about the death of two children after a compound wall collapsed and fell in the classrooms at a private school at Taukhel in Lalitpur recently. RSS