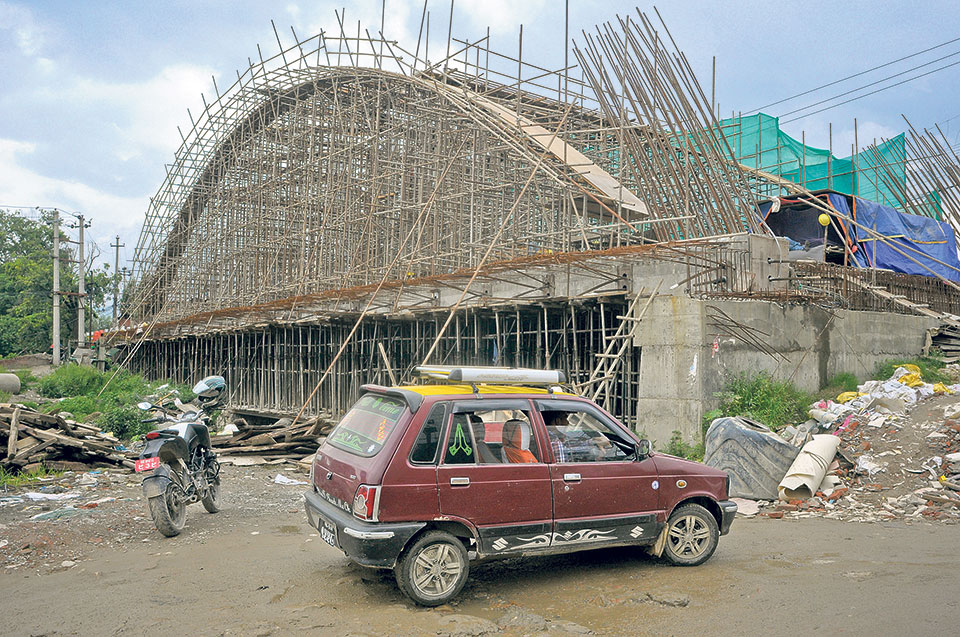 KATHMANDU, July 11: In 2015, the Kathmandu Valley Road Improvement Project (KVRIP) decided to build two sets of network arc bridges along the eight-lane Tinkune-Maitighar road section to facilitate the traffic along the busy road. These bridges are said to be the first-of-its-kind to be constructed in Nepal.

Although one set of the bridges was to be completed in 2017 and the other in 2018, much of the construction works remain to be carried out. As a result, the bottleneck at the existing bridges over Dhobikhola and Bagmati rivers have been causing traffic jam each and every day.

One of the bridges to be constructed over Dhobikhola is in the final stage of its construction now. Final works are being carried out to complete the frame of the 50.3-meter bridge which is being built downstream of the present bridge while the construction of the proposed bridge upstream has not even started. Officials from KVRIP claim that one of the bridges will be completed by Dashain.

The project worth Rs 131 million was awarded to JAYEE Construction with a timeframe of 36 months to complete the construction of all four bridges. The company was supposed to construct the bridges within the deadline of 2017 but since the construction was nowhere near completion,  the contract period was extended by a year.

The current situation of the bridges to be built over Bagmati, however, has indicated negligence from the contractor. Construction of the bridges remains in the preliminary stage and unattended. Construction materials including aggregates, iron rods, concrete pipes are scattered haphazardly under the existing bridge of four lanes. Two sub structures have been built for the upstream bridge, but further works remain unattended.

Officials from KVRIP claimed that the delay in approval of the project design and additional works to shift the public utilities near the existing bridge were the two main reasons behind the delay in the completion of the project.

“Since we had no expertise in building network arc bridges, we had to consult with a foreign company for the assurance of the design,” Information Officer at KVRIP Bishwa Bijay Lal Shrestha said, adding, “And the company took one and a half years to evaluate the design. This created an impediment on the construction works.”

The Design and Build Project of the bridge which was designed by RND Centre, was peer reviewed by International Consultant Design Planning and Management, Dhaka (DPM) of Bangladesh.
“There were water supply pipes, sewerage and electric lines near the bridge, which were very difficult to shift,” Shrestha said.

“We had to consult with various authorities to shift those public utilities. It took almost a year to do so,” he added.

He therefore claimed that the contractors cannot be fully blamed for the delay in completion of the bridges.
However, he accused Pappu Construction of making unnecessary excuses in the delay of the bridge.
“They should have done a lot works by now,” Shrestha said, “But they keep on telling us that their crane is broken. It has been a year that they have tried to repair the crane.”

“How can they be so negligent?” he questioned. “If their crane is not working, they should either repair it soon or get a new one.” The under-construction bridge at Tinkune, Kathmandu as seen on Monday.