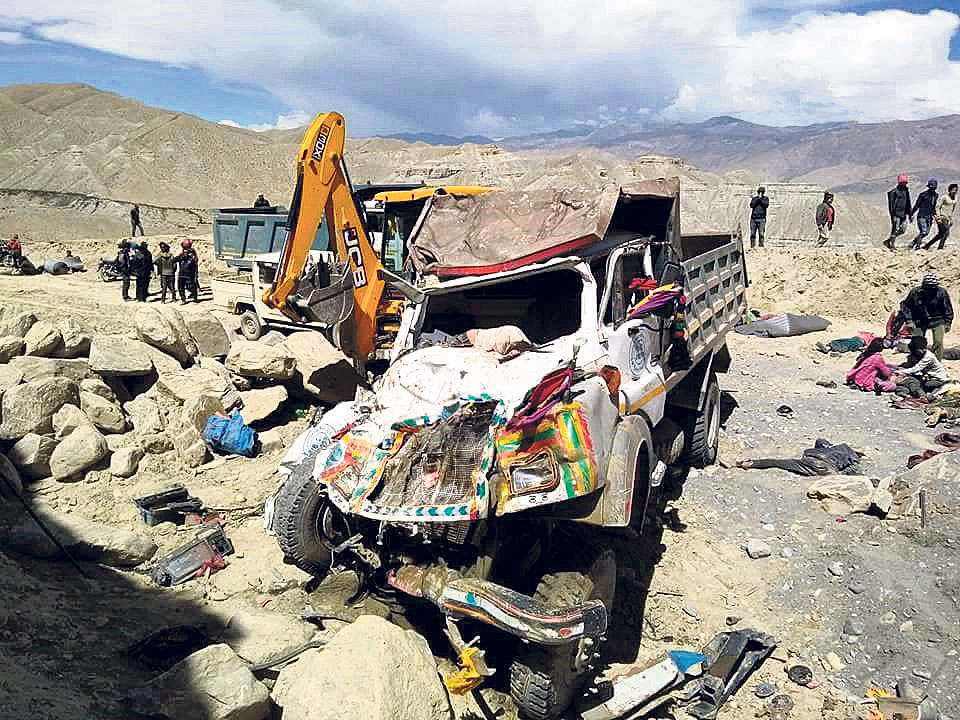 The mangled body of a tipper truck after it met with an accident Friday in Syangboche area in upper Mustang killing 20 people. The truck went out of control and fell some 60 meters from the road while on its way to a road construction site. The deceased were construction workers of Jomsom-Korala road extension project.

POKHARA/MUSTANG, July 7: At least 20 persons including 19 construction workers and the driver were killed and 12 others injured when a tipper carrying construction workers skidded off the road and fell about 60 meters into a ravine in upper Mustang on Friday afternoon.

Those killed include 14 men and 6 women. All of them died on the spot, according to police.

The ill-fated tipper was carrying the workers back to the construction site after their lunch when it met with the accident in the Syangboche area. According to Chief District Officer of Mustang, Shishir Paudel, the tipper (Ba 2 Ka 2219) fell down the road after the driver lost control of the vehicle at around 1:30 pm.

The deceased were workers of Jomsom-Korala road extension project. The workers were from hill and tarai districts. “The driver of the tipper is also among the deceased,” said CDO Paudel.

According to police, Binita Gharti, 23, of Kailali and Krishna Chhetri, 24, of Syangja, also died in the accident. Eight of the victims were from Rolpa and six from Dang.

All those injured in the accident were rescued with the help of army helicopter and jeeps, informed Deputy Superintendent of Police (DSP) of Province 4 Police Office Govinda Puri. Three of the critically injured patients were airlifted to Pokhara-based Manipal Teaching Hospital by an army chopper, while the remaining ten were taken to the district headquarters Jomsom by jeeps.

Other workers deployed in the construction site were also engaged in the rescue work as the helicopter and other vehicles took time to reach the crash site. “Narrow and steep road and high winds posed problems in the rescue work,” said DSP of Mustang Mahendra Khadka.

According to Samden Dhawa, chairman of Lo-Ghekar Damodarkunda Rural Municipality-3, the accident occurred in a bend between Syangboche and Ghiling village. Locals described Friday’s accident as the deadliest in this road section since the opening of the passage nine years ago.

Construction workers had set up their camp some 2 kilometers from the accident site. After work, they workers would return to the camp for food and shelter.

MAHENDRANAGAR, Feb 4: Two people were killed when a tipper they were travelling in met with an accident at Mujheliya of... Read More...

RAMPUR (Palpa), Jan 14: A tractor driver died when the tractor he was driving met with an accident at Rampur... Read More...

BANEPA, Jan 7: A truck driver died on the spot when his truck fell 20 metres from the road at... Read More...

US dollar soars to all-time high
20 hours ago