This is the first Russia 2018 outing for both teams and just the second match in the tournament, being the opening action on Day 2. Both sides will be desperate to begin Group A in positive style, following the Opening Match between Russia and Saudi Arabia.

The match is highly anticipated in Egypt where the country will come to a virtual stand-still for the Pharaohs’ first FIFA World Cup match for nearly three decades. It has been something of a melodramatic build-up for Egypt after the shoulder injury suffered by superstar forward Mohamed Salah. Much focus will centre on the part played by the Liverpool man during the match, if any.

Two-time World Cup winners Uruguay present a formidable opening hurdle for an Egypt side shouldering the burden making a splash on their World Cup return. The South Americans impressed at the last two World Cups, most notably finishing fourth in 2010. Though they exited at the Round of 16 at Brazil 2014, many of that side return, ensuring an experienced core remain, headlined by star attacking pair Luis Suarez and Edinson Cavani. Uruguay’s qualifying campaign was mixed at times, but they always bring their famedCharrua spirit to the big occasion.

Team reporter analysis
“Egypt against Uruguay is a match that has been long anticipated by literally millions of Egyptians. The Egyptian team is aiming for a good result, despite the lack of readiness of Mohamed Salah, the star of the team. But coach Hector Cuper has other options such as Mahmoud Trezeguet and Ramadan Sobhi, who are more suited to a defensive style.” -Belal Mustafa with Egypt

“The Uruguay team has prepared well over the past week at the Sports Center Borsky, with all players at the disposal of veteran coach, Oscar Washington Tabarez. Expect to see Uruguay attempt to maintain the greatest possible intensity against Egypt, and not allow the opponenxt to settle.” -Florencia Simoes with Uruguay

Did you know?
Uruguay have not opened a World Cup campaign with a win since 1970. In those intervening 48 years, they have collected three draws and three defeats. Will that unwanted streak change in Ekatarinburg? 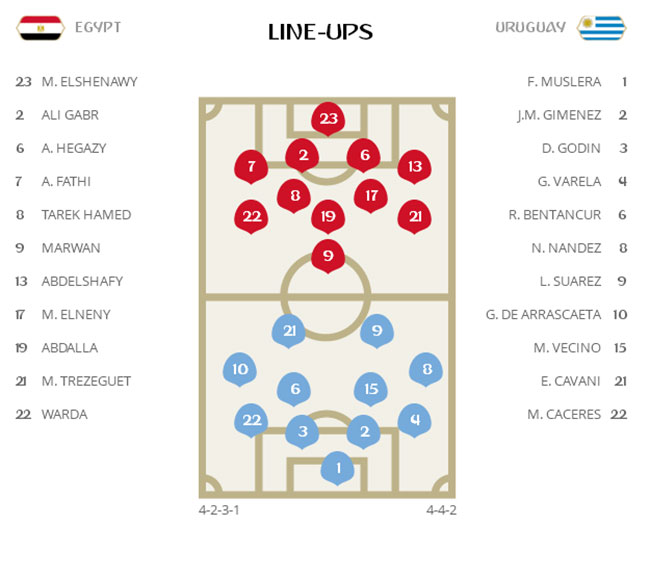