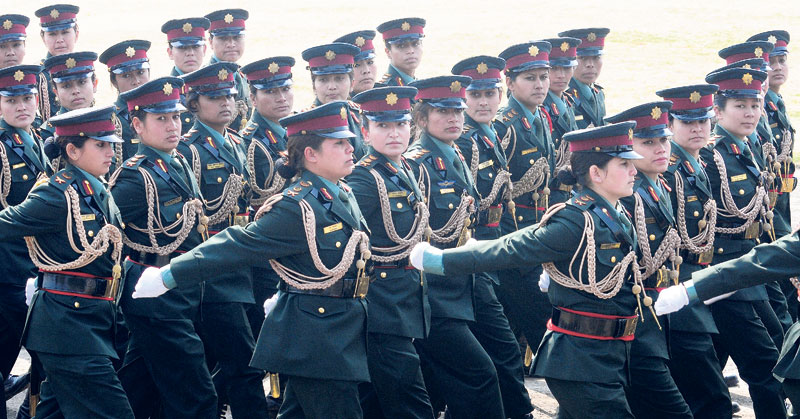 Women officers of Nepal Army march at Tundikhel, Kathmandu on the Army Day in 2012.(Republica Files)

The promotion of 44 female officers to the post of major in the first week of August is considered a milestone in the military history of Nepal.

This is the highest post in infantry held by the first batch of women as per the policy and practice of promoting women's participation in the NA since 1990.

According to the NA's Directorate of Public Relations, women participation in the army is based on the national policy of gender equality and women empowerment.

Though the NA had been recruiting women since 1961, the enrollment was confined only to technical services until 2004 after which special emphasis was given to enrollment of women in general services (infantry).

Women's involvement in technical service was confined to the roles of nurses, para-folders, medical doctors, legal practitioners, engineers and in the aviation sector.

At present, women in technical sector in the national army consist of one brigadier general, three colonels, one acting colonel, 27 lieutenant colonels and 50 majors.

“The recent promotion of female officers as majors in the infantry has contributed to the strength of Nepal Army and spurred additional attraction to the job,” said Brigadier General Tara Bahadur Karki, spokesperson of the Nepalese Army.

A task force has been working on the career plan of the recently-promoted female infantry officers as majors who will be deployed as field officers.

According to the NA, the military opened its door to women soldiers for general service demanding combat-related duties while the country was fighting the decade-long Maoist insurgency.

In order to address the issues of women officers including their career and welfare through one door policy, the NA had established a women's division under the Military Secretary branch in 2010.

“Though the number of female soldiers in the Nepalese Army is extremely low, it has increased rapidly in the recent years as per the government's encouraging policy of female participation in the national army,” added Brigadier General Karki.

As of now, the total number of female soldiers in the 92,451 strong army is 3,566, which also includes three captains and over hundreds of soldiers integrated from former Maoist combatants.

LONDON, July 16: The Gurkhas will recruit women for the first time from 2020, and the selection process will be... Read More...