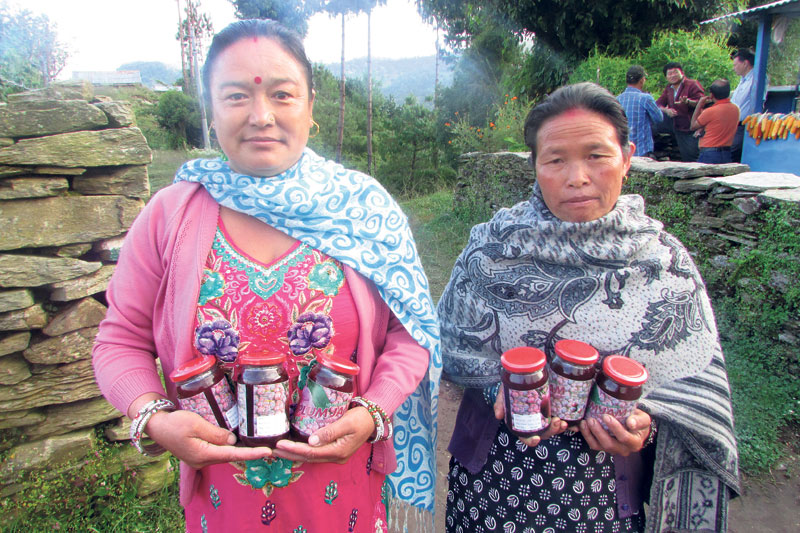 Two women from Nangi, Myagdi pose with bottles of plum jam produced at a cottage industry in the village in this recent picture. (Photos: Harikrishna Gautam/Republica)

MYAGDI, Aug 22: Mahabir Pun’s initiatives to develop his village Nangi in Myadgi are paying back. And because of that the social campaigner is receiving all praise. Pun, who is presently busy with his passion to establish national innovation center, has simply transformed this once average village into a fully self-reliant village.

“Since his return to the village, things had begun to change. Within few years, you can see, it’s a completely different place now. Most of the villagers are engaged in productive works,” said Krishna Pun, a teacher at the nearby Himanchal Higher Secondary School.

He boasted of perfect internet service in the village. Computer education, tele-medical service that is being provided in coordination with the Model Hospital in Kathmandu, mushroom, hare and fish farming and tailoring, among several other businesses have engaged the locals.

Pun had returned back to Nepal from America 25 years ago with a clear goal to develop the country. Apart from pushing for digital literacy in the nooks and corners of the country, this social leader had also dreamt of developing his and many other villages. His village Nangi is vibrant now, in terms of agriculture, tourism, education, health, Internet, among others.

“Nagi was the first village in Dhaulagiri zone to have internet access. Now, it is also the village to be self sufficient,” Krishna said. “This must be a matter of pride for all of us. This is such a beautiful change,” he added. Of the developments in the village, Krishna praised the idea of tele-medicinal service available in the village informing that the service has helped a lot of people in the whole area to access quality medical services.

Women are particularly pleased with Mahabir. He not only provided them employment opportunities but also gave ample of varieties in order to engage maximum number of women into economically productive work. According to women rights activist in the village Ram Maya Pun, Mahabir has been very smart to come up with innovative ideas to engage women. “For women empowerment, he has done wonders. Now, all the women in the village are into one or the other kind of income generating businesses,” she said.

Ram Maya has observed that shy and submissive women have greatly changed now. She attributes the change to their economic empowerment. “His leadership has been very much effective. We have changed into entrepreneurs and above all we have changed as a person,” she remarked.

Women in Pun’s village are quite happy with the production of Nepali paper, sheep farming, fish and mushroom farming. They are also operating hotels and lodges. Some are even engaged in ‘men’s work’ like in the construction sector. “Some women have been operating community lodge and hotels as well,” Ram Maya reported.

With apparent prosperity in the village, locals’ lifestyle has changed too. Ram Maya stated that people have become more aware of health and educational values and are willing to invest in the sector for securing a better life for themselves and their children.

[A herd of yaks graze in the meadows of Nangi. The village has been involved in commercial animal husbandry along with other economic activities.]

Mahabir Pun’s focus was not only on investment but building their investment capacity in the last few years. Different types of trainings were given to the locals to prepare them for new job they were going to take. According to Ram Maya, Pun had perfect design in his mind regarding the village development and his efforts have paid off. “He knows how to exploit local talents, how to tap the resources and potentials, who to produce and how to market the produce,” said Ram Maya. “And that is how; this village has become self reliant now.”

The village exports potato, mushroom, clothes and gift items. Another local Bhim Prasad Tilija did not hesitate to call Pun ‘everyone’s teacher’. According to him, the villagers only walked in the path Pun showed. “He taught and we followed him and you can see the result,” he said.

Pun states that he had sensed the potential of the village and today he feels that his dream has been accomplished. “I had sensed that the village has huge development potentials. Coming now, it’s like a dream come true,” he said. “It has been 25 years since I returned from the USA. Whatever I did within this period has given optimistic results, and this is going to certainly help me take greater initiatives for the development of the entire country,” he added. Pun was awarded the Magsaysay award in 2007.

PAANCHTHAR, June 11: mLocal units of Panchthar have started conducting programs for creating awareness among the people regarding the conservation... Read More...