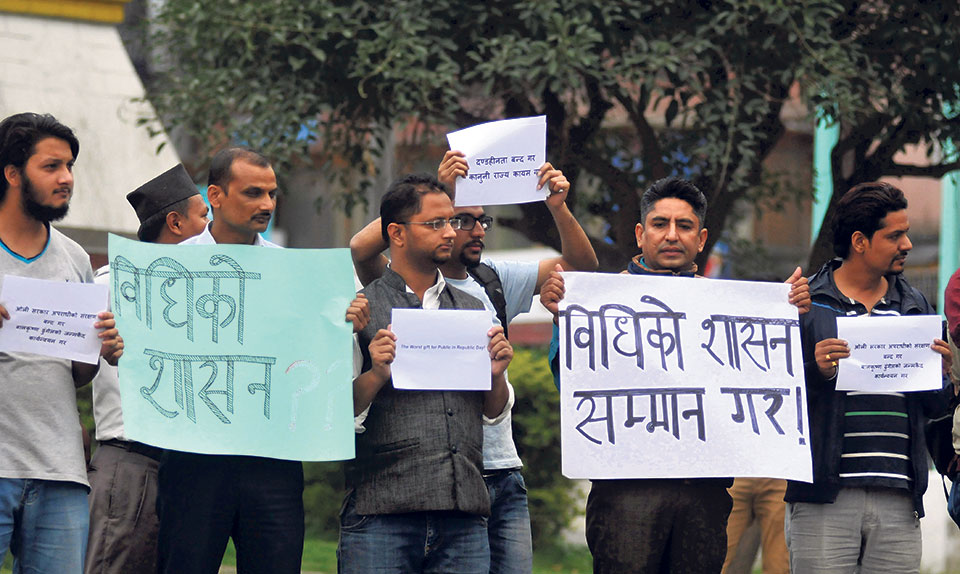 Activists of the Bibeksheel Sajha Party stage a demonstration at Maitighar Mandala in Kathmandu on Monday to protest against government preparations to release murder-convict and former Maoist leader Balkrishna Dhungel through a presidential pardon. Dhungel, who was convicted in the 1998 murder of Ujjan Kumar Shrestha of Okhaldhunga, is currently serving the eighth year of his 20-year term at Dillibazar jail. Photo: Bijaya Rai/Republica

KATHMANDU, May 29: The Supreme Court on Monday instructed the government to submit the file relating to a pardon for former Maoist lawmaker Balkrishna Dhungel, who is serving out a life sentence.

A division bench of Justices Meera Khadka and Tanka Moktan, which began hearings in a writ petition against any pardon for Dhungel, directed the government to submit the original file. The hearing will continue on Tuesday . The division bench has been testing the constitutionality of the government's preparations to release Dhungel. The government has been carrying out final preparations to release 1,034 jail inmates for good conduct, on the occasion of Republic Day on Tuesday.

The bench has been considering whether or not to issue a stay order against Dhungel's pardon under Article 276 of the Constitution.

Writ petitioner and senior advocate Dinesh Tripathi has sought the apex court intervention against the government's preparations to pardon Dhungel . He was arrested and jailed six months ago to serve out the remaining 12 years of the 20-year term slapped on him by the apex court over the killing of Okhaldhunga resident Ujjan Kumar Shrestha in 1998.Tripathi, in his petition, claimed that the government is into final preparations for releasing Dhungel through a presidential pardon, which he said would be a misuse by the government of its powers.Police had arrested Dhungel and sent him to Dillibazaar jail in November after the apex court ordered the arrest .

Dhungel was sentenced to prison along with confiscation of his property for murdering Shrestha.

Dhungel had already served eight years of a jail sentence slapped by Okhaldhunga District Court but was released when Rajbiraj Appellate Court overturned the sentence.

Senior advocate Tripathi claimed that the government was violating constitutional authority and the principle of justice in lining up a presidential pardon for Dhungel .

KATHMANDU, July 14: The Supreme Court on Friday ordered the government to submit the file on the decision to ban protest... Read More...

In Pictures: Protest against Citizenship Bill
46 minutes ago