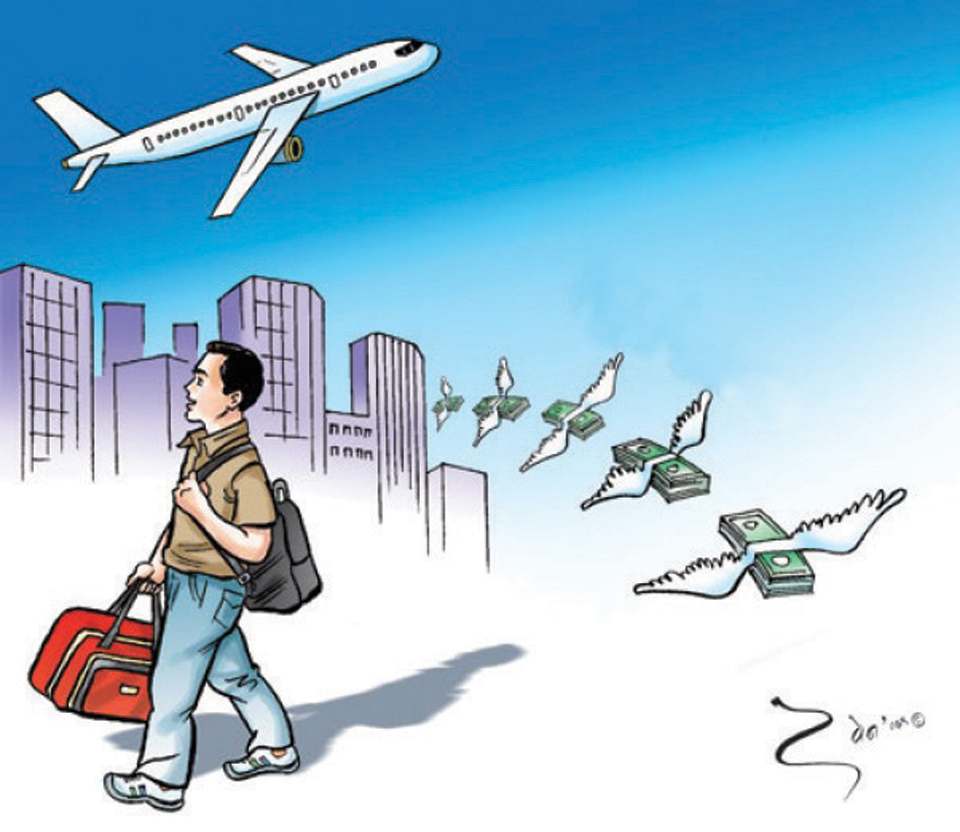 The government must embark on bold, realistic and pragmatic initiatives the for accelerating high domestic demand and creating employment by mobilizing substantial public spending on infrastructure development, with a sustained flow of remittances.

Challenges will be how to enhance business optimism in a politically unstable environment and stimulate productive economic sectors. Economy will not develop without developed infrastructure, energy and sustainable manufacturing industries. Robust growth needs to spread across all sectors.

It should not be limited to agriculture, cooperatives, tourism and small-scale investments. Economic stimulus with Marshal Plan is needed for there is no short-cut to economic acceleration for retaining millennial at home. Sadly, government’s economic performance and deliveries are not inspiring for investment platforms are narrow and short-sighted.

Future economic direction could still be lost in transition to federalism, coupled with misdiagnosed economic health and misplaced priorities. This will not entice genuine public private partnerships for sustainable investment. Looming threat persists for economy might still become a hostage to perennially embroiled relationships with economic houses, India-China puzzle, and Nepal’s inability to adapt to changing regional and global economic scenarios and emerging trends.

Sustainable jobs cannot be created without real wealth creation. Assuming that 1,500 individuals are leaving Nepal daily creation of half a million jobs with decent wages will be a mammoth task without sustainable economic stimulus investment plan. Without this job creation will not match the burgeoning supply of youths. Let’s face it. Youth emigration will continue until we have a Marshall Plan on infrastructure development and industrialization of economy. If government remains obsessed with politicizing economic sectors for political interest and personified glorification there will be no economic development.

Unfortunately, we have failed to recognize economic contribution of migrant workers. They are still not treated with dignity. Remittances constitute one third of Nepal’s annual budget and a significant chunk of foreign exchange. Nepal’s economy would have long collapsed without remittances for imports have sky-rocketed while exports continue to plummet. This fact alone should have been a respectable reason for the government to honor migrant workers as the real heroes of the country.

Migrant workers are patriots, dedicated to work ethics and are sacrificing their lives for livelihood and survival of families back home. Diaspora has truly become an important cog in Nepal’s economic wheel. This is a fact and we must revisit our perceptions and attitudes towards them.

We must accept the reality and recognize migrant workers’ crucial role. Government’s education policy, thus, should be on skills training and improving quality of work-force. State must grant more scholarships to youths attending technical and vocational skills. Technical skills are major component in economic development and crucial for youth employment at home and abroad. Changes in skills profile of work-force will contribute positively to economic transformation and quality of standard. Low skills propagate low standards in economy and result in poor quality of life.

In the Philippines, the government recognizes contribution made by Overseas Filipino Workers (OFWs) with high respect in nation’s development process. Every year, at year-end, Philippines President personally welcomes returning migrants at Manila International Airport and honors them as heroes of the country. Nation is proud of OFWs even though remittances do not exceed 10 percent of the national budget, while in Nepal it is above 30 percent.

Nepal is victim of its own contradictions shrouded in ambiguity and dilemma of maintaining robust economic alliances with India and China. Nepal is obsessed with perceived fear of sovereignty and citizens are conditioned to think this for political convenience.

Switzerland, a small country like Nepal, surrounded by big military and economic powers like Germany, France, Italy, and Austria, has witnessed two world wars and yet continues to prosper as a sovereign country. Likewise, Singapore, a tiny island nation, surrounded by murky sea waters and a hostile neighbour with no start-up domestic resources, became one of the richest and financially meritorious countries in the world. Why can’t we achieve something realistically similar based on our strength or even weakness? When will Nepali leaders shed old political baggage and make economic agenda the top priority?

Foreign direct investments do not necessarily tamper with sovereignty. It has not happened with China, Vietnam, Cambodia, Philippines, Rwanda, Ethiopia and Nicaragua to name a few. Communist China has welcomed foreign direct investment and created massive wealth and now is spreading this surplus in other countries. India does not have that kind of surplus fund and clings on to its regional peripheries.

China has economically outsmarted India with the revival of ancient Silk Road project. Understandably, India could not be happy for it is unable to subscribe to China’s ambitious global project because both countries are keen on influencing the same territories while competing with similar aspirations. India cannot replicate China for it is marred by internal political contradictions and lacks fund.

China, Korea, Japan, Vietnam, Cambodia, Indonesia, Singapore, Thailand and Malaysia have not lost sovereignty with foreign direct investment. On the contrary, political standing of these countries has risen and their citizens are treated with dignity and respect.
In Nepal, sovereignty fear has become a mass mesmerizing mantra of ‘divide and rule’ strategy for political manipulations.

This is contributing adversely to economic progress. We need to make the country economically viable, secured and liveable by improving standards and quality of life before demanding patriotism from poor citizens. Nation becomes strong only with economic prosperity and patriotism flourishes concomitantly.

Mystic glorifications, devoid of economics, won’t guarantee economic security of citizens. The millennial aspire for better economic future. We have no choice other than becoming economically strong, if we do not want to remain in status-quo forever.